2018 King of the Hammers Race Report from Chad Hummer 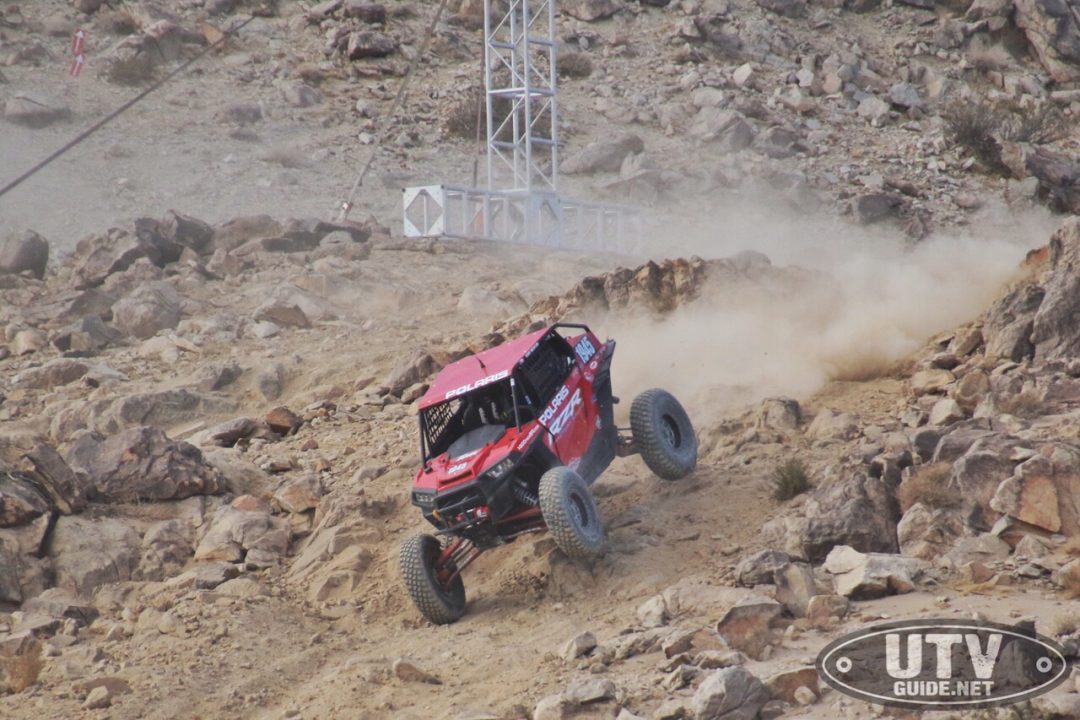 Blake built another fast car for the 2018 King of the Hammers UTV race! The shocks and tires were simply amazing underneath the Polaris RZR XP Turbo car. Blake has spent so much time tweaking his Walker Evans Racing Velocity shocks, they felt great after 100 miles of KOH bone jarring whoops and cross ruts. He drove like a girl in qualifying and still got 9th out of 94 cars, not bad for someone who doesn’t like jumps or sliding the car sideways. Blake airing out his RZR during qualifying

The race started out great, we passed our starting line competitor immediately and then we drove 100% through the rough desert, chewing up racers and spitting them out. We hit some rocks in the dust that caused the car to ‘take flight’ a few times, but the BFG KR2 tires held up great, as did the RCV Axles to all the shock loads and sideways landings we gave the car. Suddenly we are approaching 3rd place car on course, only 14 miles into the race and the car goes into limp mode. We pull over to assess the problem and find the radiator fan was not working and noticed we also had lost a rear axle nut off the car, which in turn chewed up the rear wheel bearing. We are close to Crowbar Trail, and decide to limp back to Pit 1 and make repairs.

These repairs cost us 2 hours and our hopes at finishing went out the window. We continued racing after the fix but when we got to the rock trails they were backed up with so many cars/struggling racers that it was impossible to make up any lost time. We helped other racers navigate the rocks, while putting our own ‘sticky’ BFG tires through the paces. We used our WARN 9000 winch to make some crazy passes on lines no other UTV has taken…ever! Blake and Chad at Race Mile 3

The most depressing part about the race is knowing we had a car that was a contender…but we pushed it a little too far past its threshold. We ended up making it 110 of the 134 mile race before we ‘timed out’. Thanks to Blake and Monica for the opportunity and hospitality for the last 4 years of racing KOH! Thanks to Bill Schueler/Brandon Schueler and the entire JaggedX crew for supporting our efforts. Thanks to Polaris RZR and Scanlon Motorsports Group for all support and pit crew. This was Sarah’s first time experiencing KOH and the crazy crowds and race course (Thank you Sarah for putting up with all of the craziness and taking time off work!). We will be back to find vindication and show the Hammers who is boss! Special Congrats to the top 3 finishers who were all driving Polaris RZR’s; Mitch Guthrie Jr., Branden Sims, and Mitch Guthrie (see POLARIS FACTORY RACING SWEEP PODIUM AT KING OF THE HAMMERS). Hats off to you guys for surviving the race, give your co-dogs a big fat congrats from me.