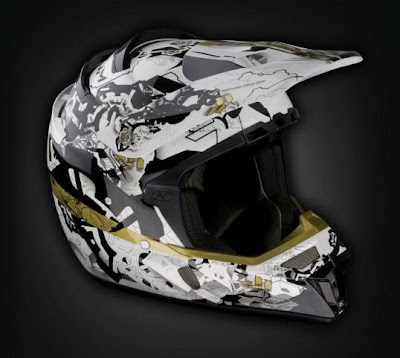 This new F4 helmet is my second from Klim.  I liked my red, white and blue F4 so much that when it was time to update, I did it again.  This time I went with the Geard style. The new colors mix well with the wide variety of vehicles I drive and the helmet looks better in person that on the internet.

Klim has continued to update their F4 design since it was first introduced.  Taking feedback from riders, dealers and racers, the third generation F4 has a more comfortable fit and improved ventilation.
The F4 has three large air channels that run laterally through the helmet. Not only do they ram air into the helmet to keep your head cooler, but they also help increase the structural integrity of the helmet. Both the liner and plenum chamber inside the EPS foam have been redesigned to allow a greater volume of air though the helmet and onto the rider’s head. No other helmet I have used even comes close to the cooling of the F4.
I have used my new F4 on a few different rides. First was the Kawasaki Teryx4 Camping Trip on the Rubicon Trail in June 2012. This is rock crawling.  Slow going, sometimes dusty and 80 degrees.  Then I went to Moab in July with John Deere to test the new RSX850i and it was 100 degrees. Fast desert rides and slow rock crawling. The next trip was at DuneFest 2012 up in Winchester Bay, Oregon Dunes. Completely different riding on the coast.  Cool temperatures and I was getting lots of car-to-car GoPro footage where I was eating sand.

The F4 felt great in all terrain and weather conditions.  I really like how the helmet fits, looks and cools. Klim has built a quality product in the F4.

Klim F4 on the Rubicon Trail in our Kawasaki Teryx4