King of The Hammers Will Continue in Johnson Valley, CA 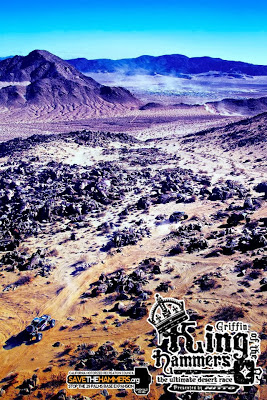 December 11th, 2013: JOHNSON VALLEY, CA: Hammerking Productions, the founders of The Griffin King of The Hammers Presented by Nitto Tire, are pleased to announce that the week-long off road festival held annually in Johnson Valley, CA will be able to continue in its current location for the foreseeable future. After six years of negotiations between the United States Marine Corps, the federal government and the Off Highway Vehicle(OHV) Community, a deal has been reached to preserve the majority of the land in Johnson Valley for OHV use.

Congressman Paul Cook spearheaded the deal which allows nearly 100,000 acres of land to remain open to the public and managed by the Bureau of Land Management (BLM). The Marines will have access to approximately 55,000 acres of shared use land for 60 days a year to meet their training objectives, but will not retain ownership of the land the remaining 305 days a year. The proposed legislation is expected to pass the House later this week and the Senate next week before the holiday recess.

The deal preserves access to the trail system known as “The Hammers.” Areas that were formerly at risk including trails named Spooners, Aftershock, Sunbonnet, and Riffle Canyon as well as the California 200 Memorial at the spot known as “The Rock Pile” on Bessemer Mine Rd. remain open to public recreation under the current plan. The plan also includes access to Soggy Lake, Emerson Lake and the majority of the Fry Mountains.

Dave Cole, founder of King of The Hammers, had this to say, “This deal is something that couldn’t have happened without the tireless support of the entire off road community. Thousands of people have donated time, energy and money for us to reach this point. Thank you to all who have worked to Save the Hammers for future generations. I especially want to thank Congressman Paul Cook, The California Motorized Recreational Council and The Off Road Business Association for their efforts. We wouldn’t have made it to this point without them.”

The 2014 Griffin King of The Hammers Presented by Nitto Tire is scheduled for February 7th, 2014 in Johnson Valley, CA. The weeklong series of off-road races kicks off on January 31st, 2014 with the opening of Hammertown to the public. For more information on King of The Hammers, please visit www.ultra4racing.com

ONE OF THE FASTEST GROWING MOTORSPORTs IN THE US – ULTRA4 RACING ULTRA4 Racing began in 2007 with a dozen friends competing for bragging rights. Six years later, more than 350 cars compete nationally and internationally in ULTRA4 races. In 2013, races in the United States will be held in the following states: Utah, Pennsylvania, Indiana, Arkansas, California and Texas. Additionally, the 2nd annual ULTRA4 sanctioned King of the Valleys race will be taking place this August in Wales, UK.

King of the Hammers Coverage:

ULTRA4 is a vehicle type, class and series. ULTRA4 Racing was born from the popularity of the annual Griffin King of the Hammers Presented by Nitto Tire, considered to be the toughest one-day off-road race. The vehicles are unlimited four-wheel drive, capable of competing in multiple racing disciplines – extreme rock crawling, high-speed desert racing and short course. In six years, the sport has grown significantly from the inaugural King of the Hammers to an eight race national series including a National Championship. ULTRA4 Racing is managed by Hammerking Productions located in Temecula, CA. To learn more, log on to www.ultra4racing.com.