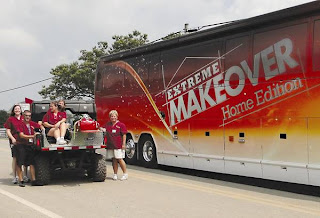 Westmore, Vermont, September 7, 2010 –– Kimtek Corporation responded to a unique opportunity to support a medical response team and to serve on the set of Extreme Home Makeover (EHM) for a Pennsylvania family in need.

ABC’s Extreme Home Makeover uses local volunteers to remodel homes for deserving families and draws thousands of spectators to the site. The program’s producers contacted Saint Josephs Medical Center in Reading, Pennsylvania about emergency medical support for the crew and volunteers, but also alerted them about the large crowds that typically watch the progress of the Makeover.

In late July, Saint Joseph Medical Center contacted Kimtek about their MEDLITE Transport unit. After talking with the customer at length about their specific requirements for the unit, Kimtek learned that the MEDLITE would be used on the set of EHM. Kimtek expedited a MEDLITE Transport Deluxe MTD-10 out the next day to allow Saint Joseph Medical Center’s crew to train with the unit before the August event.

The Polaris Ranger 6×6 with MTD-10 skid acted its part well on the show with large crowds, crew injuries, and 90 degree temperatures.

Kimtek Corporation was founded in 1984 as a research and development company dedicated to advances in life safety technology in the fire sciences. Kimtek manufactures and markets FIRELITE™ and MEDLITE™ Transport skid units for emergency service UTVs and pick-up trucks. More than 850 units are in service in 49 states and three provinces. For more information, contact Kimtek at 888-546-8358 or visit the company Web site at www.kimtekresearch.com