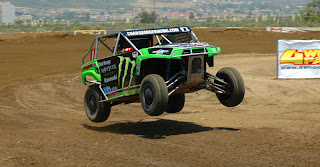 Rialto, CA (May 25, 2011) – Chad George took his Kawasaki SuperLite Championship truck to the front at Rounds 5 & 6 of the Lucas Oil Off-Road Racing Series at the famed Glen Helen Raceway, but a whirlwind of bad luck wouldn’t let him claim victory in front of the huge crowd.

The Southern California native arrived at his hometown track on Friday with full intentions of annihilating the competition. Extensive pre-race testing, and all new powerplant had the Kawasaki/Yokohama Tires SuperLite Championship truck outpacing the class. Chad quickly took #42 to the second qualifier spot for Saturday’s Round 5 main event and proceeded to run up front through the halfway yellow flag session. After the restart Chad eluded a major pile up, but as he raced toward the flag stand, he found the #42 had a different plan. As he set-up for the next turn, the #42 broke a steering component forcing him off course and into a Beard Seats/Simpson Racing test session with a race-ending roll. The #42 Kawasaki/Yokohama Tires machine came to a rest with with no injuries to Chad and a 12th place standing for the day.

After some TLC on the #42 Kawasaki/Yokohama Tires race truck, Chad put Saturday’s results in the backseat as he qualified #1 for Round 6 of the Lucas Oil Off-Road SuperLite main event. Chad’s top qualifier spot beat 14 other drivers to the front, and earned some valuable points. As Sunday’s race launched into a multi-restart event, the #42 kept clean and drove into a fierce 3-way battle for the lead. Approaching the halfway yellow flag, power began to drop as if a tornado blew through robbing all power. Chad quickly pulled into the hot pits during the yellow flag session, shut down the vehicle, and just like rebooting an old computer after days of use, the #42 restarted and was back at full power. In a never say die fashion, Chad dug deep with his Yokohama Tires and drove himself to a 6th place finish.

Chad completed his race weekend by dominating the qualifying rounds of the UTV Modified class in his #1 Monster Energy Kawasaki Teryx. After yet another twister blowing through the engine compartment on both main events, the reigning champ used his “race-smarts” and settled for a pair of 3rd place finishes while maintaining the overall points lead.

Chad commented, “It was a weird weekend, during practice and qualifying we were faster than ever, on race day we were still fast, but somehow it all blew away. Even the bright LX LED lighting from our new partner, Lazer Star, couldn’t guide me through the bad luck storm this weekend! We still have time to claim the crown in both SuperLite Championship and UTV modified, I’m confident in my team, my equipment and myself to make that happen.”

Join Chad in his quest for dual championships at Rounds 7 & 8 of the Lucas Oil Off-Road Racing Series at Miller Motorsports Park, north of Salt Lake City on June 25-26. You can also join Chad on Facebook and Twitter (@chadgeorgesxs)

About Funco Motorsports: Founded by Gil George over 30 years ago, FUNCO Motorsports is the leading manufacture of high performance sand, off-road cars and custom UTV’s . Their unique designs and family oriented service has sold over 400 Big 5 Model cars and their entry into the UTV market has been explosive too. With 4 consecutive championships, FUNCO Motorsports has proven that their experience on the track translates into quality, race-proven products for all UTV enthusiasts Home

About Kawasaki Motors Corp., U.S.A.: ATVs, Motorcycles, Utility Vehicles, Watercraft and Power Products are just some of the unique consumer products that have made the Kawasaki brand a household name around the world. From the class leading Ninja® sportbikes and thundering Vulcan™ cruisers to the rugged Brute Force™ ATVs, MULE™ utility vehicles and JET SKI® watercraft, Kawasaki products lead the powersports industry around the globe. The secret of Kawasaki’s success is in designing and manufacturing products that offer balanced performance, high quality, reliability and excellent fit and finish. So take a look at what Kawasaki has to offer you in the way of Leading Edge products! Kawasaki Motorcycles, ATV, Jet Ski Watercraft, Utility Vehicles, Recreational Utility Vehicles

Four Wins for Maxxis at WORCS Round 7