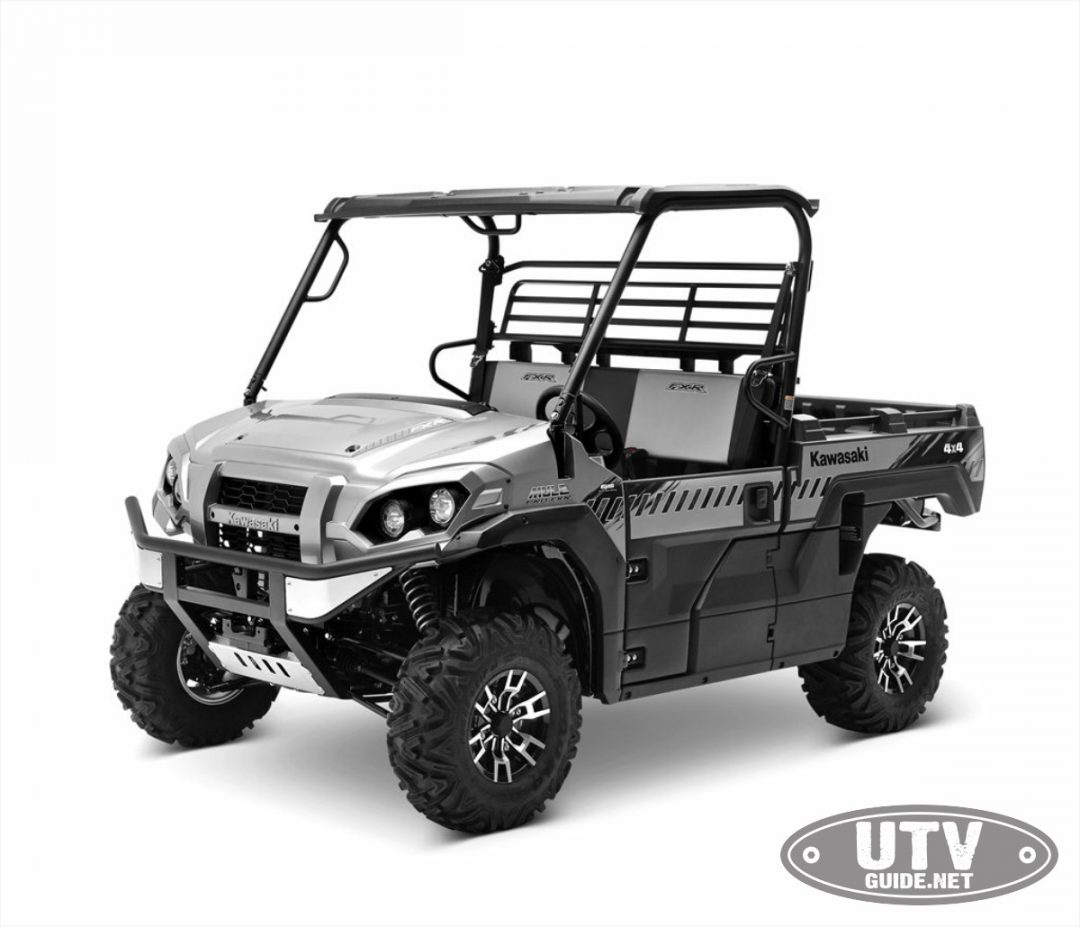 Starting with a humble idea drawn on a cocktail napkin in August 1980, Kawasaki expanded the utility vehicle segment by creating the Kawasaki MULE™ side x side. That drawing later became the MULE 1000 in 1987. Today, Kawasaki offers a full line up of 30 MULE models, all evolved from this single unit. Over the past 30 years, Kawasaki has modified the MULE side x side to reflect current technology and market needs. Within three years of production, Kawasaki began to swiftly upgrade the MULE with new technology and features. In 1990, the combination of selectable 2WD or 4WD with a Hi/Lo transmission made the MULE 2010 the most versatile utility vehicle on the market at the time. The next year Kawasaki introduced the MULE 2020, nicknamed the “turf” MULE, a medium-class utility vehicle that was specially designed for use on golf courses, sporting fields and other places where a soft “footprint” is important. Powered by a fan-cooled single-cylinder engine, the MULE 2020 featured a dual-mode differential that could be locked for maximum traction or unlocked to minimize ground disturbance. Turf-type tires and easy to use controls made this vehicle an instant hit.

Only the next year in 1992, Kawasaki updated the MULE with V-twin power, utilizing a larger, more-powerful liquid-cooled 617cc V-twin engine inside the MULE 2510 that featured 4-wheel drive, heavy-duty carrying capacity and a tilting cargo bed, making it the top of the line for the time.

The MULE line continued to evolve throughout the 1990s, with more iterations and more specialty models such as the MULE 2520, the next series in the 2500 line with a quiet-running V-twin and lightweight footprint; and the MULE 550, a compact two-seater also with quiet V-twin power. “Looks like a truck. Works like a MULE™” was the slogan when Kawasaki introduced the 4WD MULE 3010, MULE 3020 and 2WD MULE 3000 models in 2001. Powered by gutsy, liquid-cooled, 617cc V-twin engines coupled to all-new CVTs, they were some of the hardest working and most durable machines Kawasaki had ever produced. Radical new pick-up truck styling, improved ergonomics and other design features made this new generation of stylish, hardworking utility vehicles an immediate hit.

In 2005, the comfortable, convenient, and compact MULE 610 4×4 and 600 were introduced. These new “baby” MULE utility vehicles featured new 401cc engines and new high-volume bodywork, with more rugged suspension, and a number of other features designed to increase their comfort and convenience. The MULE 610 4×4 also featured selectable 2WD/4WD – a class first – and large 24-inch tires. Both models were still small enough to fit in the bed of a pick-up truck. Also in 2005 Kawasaki introduced “4x4x4” MULE technology, a new versatile seating positioning offered on multiple MULE units. At first glance the MULE™ 3010 Trans4x4® looked like any other 3000 Series MULE, but the Trans4x4 model featured two rows of seats, enabling it to accommodate four passengers. Being able to switch between two-passenger and four-passenger modes gave the Trans4x4 much greater flexibility. In four-passenger mode, a family, work crew or group of hunters could be accommodated; in two-passenger mode, cargo space was maximized. In 2010, the MULE 610 4×4 XC (or “Bigfoot” MULE) featured larger, 26-inch tires and 12-inch wheels. Its enhanced off-highway capability and increased ground clearance was complemented by a sporty design and graphics package. Combined with the dependable performance of the MULE 610 4×4, this latest compact utility vehicle opened the door to greater potential for leisure activities. In 2015 Kawasaki revolutionized the market yet again, with the introduction of the MULE PRO-FXT™. Marketed as the King of the MULES, this all-new MULE PRO platform featured highly capable versatility with class-leading torque, making it the fastest and most powerful MULE ever. It also had a new configurable Trans Cab™ seating system for three or six passengers and a standard Kawasaki STRONG three-year limited warranty, along with more comfort and convenience features than ever before. Taking the high class and high capability even further for 2018, Kawasaki recently introduced the all-new Kawasaki MULE PRO-FXR™, a unit designed to play as hard as it works. With the versatility and class-leading torque the MULE PRO line is known for, but in a compact, high quality package, its compact shape stands out with a premium appearance, painted finish and aggressive styling. The new MULE PRO-FXR is a true boss vehicle and a perfect example of the constant advancements in usability, technology and quality that the Kawasaki MULE has been known for 30 years.

ABOUT KAWASAKI
Kawasaki Heavy Industries, Ltd. (KHI) started full-scale production of motorcycles over a half century ago. The first Kawasaki motorcycle engine was designed based on technical know-how garnered from the development and production of aircraft engines, and Kawasaki’s entry into the motorcycle industry was driven by the company’s constant effort to develop new technologies. Numerous new Kawasaki models introduced over the years have helped shape the market, and in the process have created enduring legends based on their unique engineering, power, design and riding pleasure. In the future, Kawasaki’s commitment to maintaining and furthering these strengths will surely give birth to new legends.

Kawasaki Motors Corp., U.S.A. (KMC) markets and distributes Kawasaki motorcycles, ATVs, side x sides, and Jet Ski® watercraft through a network of approximately 1,100 independent retailers, with close to an additional 7,700 retailers specializing in general purpose engines. KMC and its affiliates employ nearly 3,100 people in the United States, with approximately 260 of them located at KMC’s Foothill Ranch, California headquarters.