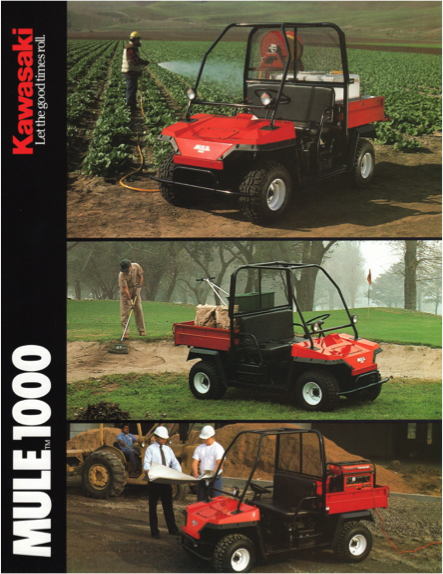 Evolved from a simple napkin sketch to a purpose built two-seat utility vehicle, Kawasaki revolutionized the side x side utility vehicle segment with the introduction of the MULE™1000, 30 years ago. Kawasaki saw a need in the market that was being underserved by the ATV segment, which generated the idea for a two-seat, four wheel utility vehicle.

It took nearly seven years of development by Kawasaki’s Research and Development team to bring the first MULE 1000 side x side to production in 1988. The design team worked through a variety of engines and designs, to meet the needs of the ranchers and farmers eventually incorporating a 454cc liquid-cooled parallel twin, which was a proven platform in Kawasaki’s cruiser lineup. The engine was large enough to support the 500lb carrying capacity and two riders, and quiet enough not to scare animals out on the farm. Codenamed “Pony” by Kawasaki Heavy Industries, LTD in Japan, a production name was needed for the new utility vehicle. The advertising agency for Kawasaki Motors Corp., U.S.A. at the time, Bozell Advertising, pitched using the acronym Multi-Use Light Equipment or MULE for the new side x side line—and so the MULE was born.

Over the last 30 years the MULE has evolved with the inclusion of four-wheel drive, locking differentials and the TransCab™ seating system, but at the heart of every MULE side x side, which are assembled with foreign and domestic parts in Lincoln, Nebraska, is the strength of the 30-year old MULE 1000 side x side utility vehicles, which are still in use today. ABOUT KAWASAKI
Kawasaki Heavy Industries, Ltd. (KHI) started full-scale production of motorcycles over a half century ago. The first Kawasaki motorcycle engine was designed based on technical know-how garnered from the development and production of aircraft engines, and Kawasaki’s entry into the motorcycle industry was driven by the company’s constant effort to develop new technologies. Numerous new Kawasaki models introduced over the years have helped shape the market, and in the process have created enduring legends based on their unique engineering, power, design and riding pleasure. In the future, Kawasaki’s commitment to maintaining and furthering these strengths will surely give birth to new legends.
Kawasaki Motors Corp., U.S.A. (KMC) markets and distributes Kawasaki motorcycles, ATVs, side x sides, and Jet Ski® watercraft through a network of approximately 1,100 independent retailers, with close to an additional 7,700 retailers specializing in general purpose engines. KMC and its affiliates employ nearly 3,100 people in the United States, with approximately 260 of them located at KMC’s Foothill Ranch, California headquarters.

Walker Hill is one of the named obstacles on the R

@phil_blurton making his way up Old Sluice on the

New @assaultutv Hellfire V2 grills for Can Am Mave