FOOTHILL RANCH, Calif. (July, 8 2016) – Kawasaki’s wide-eyed performance is legendary, but an equally important form of innovation was the Lincoln, Nebraska assembly plant that opened in 1974. The plant was groundbreaking on several fronts, primarily as the first assembly plant in America for a Japanese motorcycle manufacturer. In subsequent decades, several other Japanese automotive and motorcycle manufacturers would follow Kawasaki’s lead.

The reasons for the creation of the Lincoln plant were both complex and important. First, in 1971 a devaluation of the US dollar substantially raised the prices of Japanese products. Second, a 10% import tariff meant to protect American products would likewise boost the price of Japanese imports. Third, Kawasaki needed to expand production capacity to meet growing retail demand. Finally, Kawasaki Heavy Industries, Ltd. (KHI) wanted to shorten the supply line between Kawasaki Motors Corp., U.S.A. (KMC) and its dealers. Clearly, the Nebraska facility would be a win-win for everyone. But first it would have to get built.

Envisioned by KMC President Yoji “George” Hamawaki, plans for a facility in Nebraska were set into motion, with a large industrial building and many acres of adjacent land. Production finally commenced on the morning of January 22, 1975, and the first vehicle off the assembly line was a royal blue KZ400 parallel twin motorcycle. Gifted to Nebraska governor James Exon, it represented both the first Kawasaki vehicle and the first Japanese vehicle produced in the United States.  The KZ400 was also distinguished as the first belt-drive production bike.
Kawasaki Motors Manufacturing Corp., U.S.A. (KMM) was incorporated in 1981 and assumed control of the Lincoln facility.  Since then, KMM has expanded the scope of its operations not only with respect to Kawasaki powersports products, but robotic equipment assembly and rail car assembly as well.  Known informally as the Kawasaki Production System, a “just-in-time” manufacturing process brings components together exactly when needed to maximize efficiency, reducing delays and overstock in the process.

How successful is KMM after nearly four decades? Very. Since its inception in 1974, the KMM plant has grown from 286,000 sq. ft. to almost 2.1 million sq. ft. today – a sevenfold increase – while employing over 1,900 workers. And that’s how they do it in Nebraska.

ABOUT KAWASAKI
Kawasaki Heavy Industries, Ltd. (KHI) started full-scale production of motorcycles over a half century ago. The first Kawasaki motorcycle engine was designed based on technical know-how garnered from the development and production of aircraft engines, and Kawasaki’s entry into the motorcycle industry was driven by the company’s constant effort to develop new technologies. Numerous new Kawasaki models introduced over the years have helped shape the market, and in the process have created enduring legends based on their unique engineering, power, design and riding pleasure. In the future, Kawasaki’s commitment to maintaining and furthering these strengths will surely give birth to new legends.

Kawasaki Motors Corp., U.S.A. (KMC) markets and distributes Kawasaki motorcycles, ATVs, side x sides, and Jet Ski® watercraft through a network of approximately 1,100 independent retailers, with close to an additional 7,700 retailers specializing in general purpose engines. KMC and its affiliates employ nearly 3,100 people in the United States, with approximately 300 of them located at KMC’s Foothill Ranch, California headquarters. 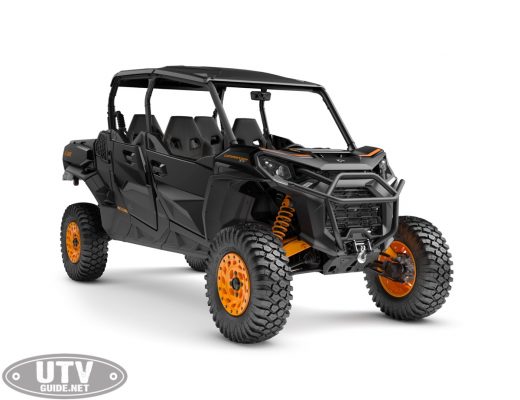 Second Podium Sweep for Can-Am at King of the Hammers