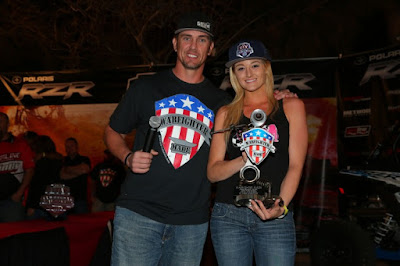 Laughlin, NV (2/22/2016)– With a record UTV turnout of 200+ racers, this UTV World Championship was going down as the biggest UTV race of the year. During Fridays tech and contingency, I was on air with Jim Beaver from the Down and Dirty radio show and I also signed autographs out front of the UTV Underground booth. Saturday’s race began with the BITD desert race. My team and I helped pit for Tyler Greves and Kevin Burnette from Superatv. They had a great race so I was eager to get out on the track. My race was 64 miles, 4 laps, and 103 UTVs were in my class. I lined up in the fourth row and when the green flagged dropped I started my engine and launched to a great start. “I came off around third or fourth into the first turn. I was doing really well. I kept up the momentum and passed a lot of cars,” stated Vernola. Unfortunately, the good ride quickly came to an end when Vernola’s brakes unexpectedly went out. “I came into a turn hauling like I always would and I found that I didn’t have any brakes. I slammed into the car in front of me and flipped over.”

Vernola’s persevering attitude pushed her to keep going even after the accident. She attempted to push the car over herself and even had a fellow racer by the name of Dennis Boyb from S3 Power Sports stopped to lend a hand, but it took a truck to pull the RZR back over. “Dennis stopped on the track and tried to help me push the car over. We tried one or two times but it was not budging. I think that was huge for someone to stop and do that at such a big race like this,” stated Vernola.

“I looked at my car and thought my race was over. From my experience in the past I knew don’t stop and that’s exactly what I did. I kept going around 15-20 mph all the way back to the pit. Somehow four laps later my car made it to the checkered flag,” explained Vernola.

After such a heart-wrenching race, emotions overcame Vernola at the finish. “ When I saw the checkered flag I just started bawling my eyes out. I couldn’t hold it back I was so happy I finished. It was an unreal experience,” explained Vernola.

Making it to the finish line after a crash such as Vernola experienced is no easy feat. She credits her great sponsors and components for getting her there. “I was very happy with my Bikeman Motor. I saw a lot of people on the side with flats and other random damage, but my Super ATV suspension, Fuel Offroad Wheels and Black Rhino Cage held it together. I was able to go the 40 plus miles even after the flip,” stated Vernola. 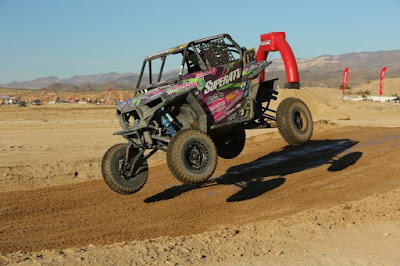 Vernola was also honored with the War Fighter award for Perseverance. Upon accepting this award, Vernola had some inspiring words to share, “When one little thing happens it could be all gone in one second. That’s all it takes. Today, and every day of my life I always know to never give up. No matter how hard it is, no matter how many people tell you that your not good enough, your not capable, your not cut out for this, it doesn’t matter. As long as you set yourself out for it you can achieve it. I never thought in a million years I would be here. I am very honored and privileged to accept this.”

“I will do whatever I have to do to make sure I come back with my car just as prepared as it was the first round, if not even better. Hopefully I will get a better chance at the next one and get a better finish for my sponsors.”

Super ATV’s Katie Vernola proved her determination at the Polaris RZR UTV World Championship by overcoming adversity and pushing on to the checkered flag to finish the race. For her perseverance, she was honored to receive the War Fighter Award. Watch for Vernola to come back stronger than ever this coming weekend at the South Point WORCS race in Las Vegas, Nevada. 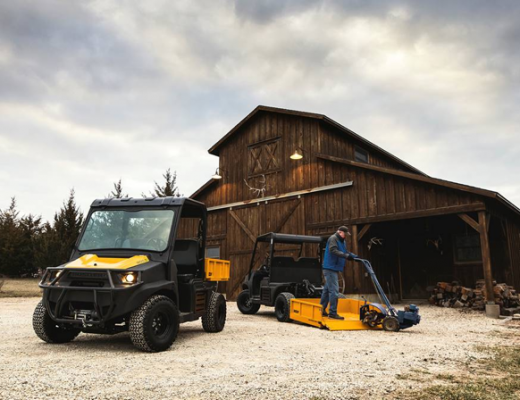