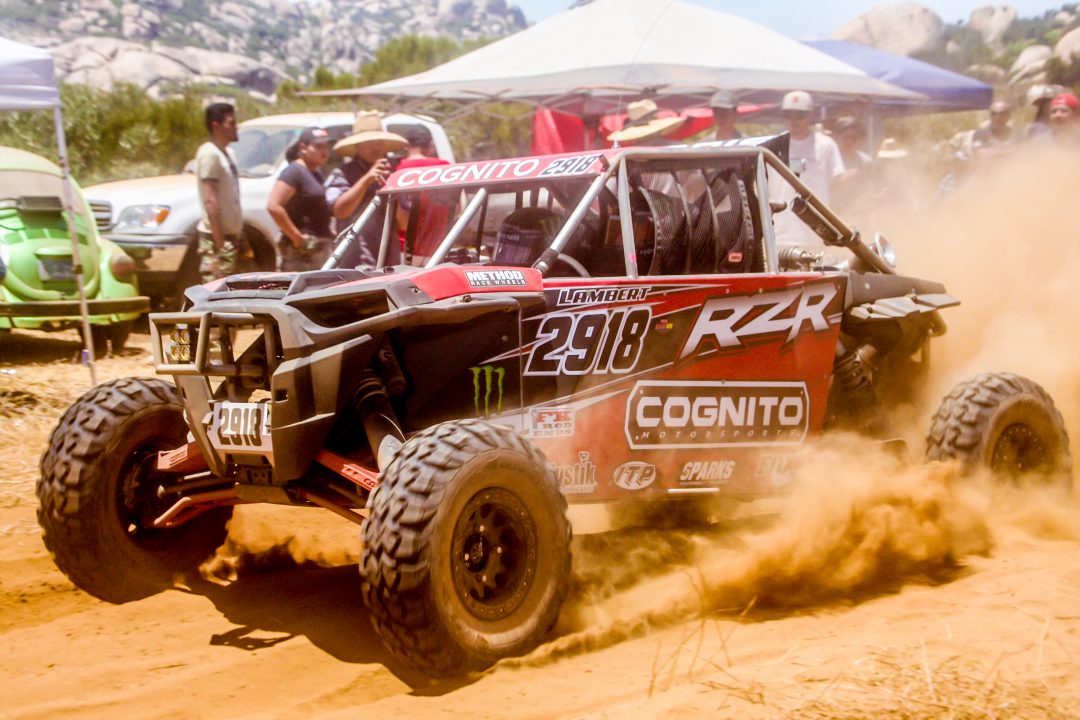 Our team has been digging for a win in Baja for a few years now, the closest we have been is 2nd place at last year’s Baja 500. The testing we have done this year on our new car has been overwhelming financially and in its longevity, but we felt pretty good about this race and knew we were a contender for a podium position in our new Polaris RZR XPTurbo.

We spent only 2 days pre-running, I pre-ran the start to race mile 240 and then from 395 to 515. Mitchell pre-ran from 240 to 395 which is the section I was getting out of the car, and he was sliding over from the right seat to the driver’s seat. I would take a 155-mile break during the race but Mitchell planned to be in the car the entire race. 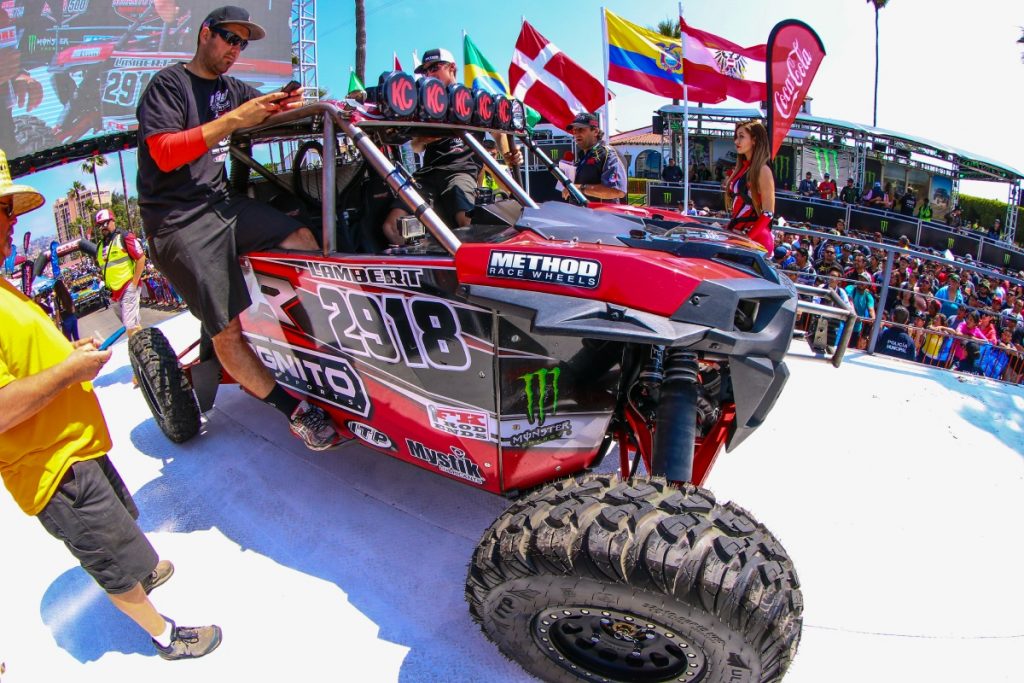 At the start of the race we were 13th car off the line in a 36 UTV field for both the turbo and non-turbo classes. There were nearly 100 larger vehicles from faster classes that left the start before we did, so the dust in the first 20 miles was pretty intimidating. We made our way to 7th UTV on the road by race mile 20 where there was a 7-mile highway speed zone section. The Murrays were right in front of us on the highway and the speed limit was 37 mph. Mitchell and I were trying to run as close to 37 as possible without going over and getting a penalty. The Murrays were playing it really safe at times running 32mph, so we got on their bumper and gave them a little nudge to let them know we were ready to race. They decided to pull over and slow down and they waved us to pass, so we gladly did just before the course bailed off the highway and back into the dirt at race pace. 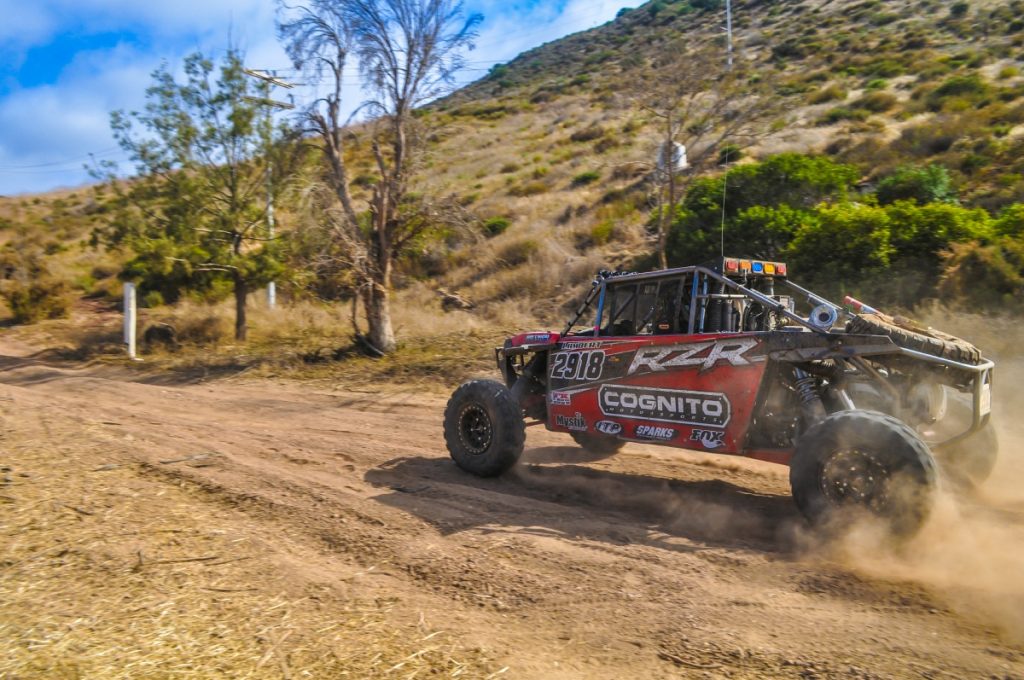 In the next ten miles, we picked off more UTVs as well as some trucks and buggies from faster classes, and by race mile 40 we passed Mark Burnett and by our count, we were now physically in the lead. This next section has tight trails and there are some spots that become very silty with no passing room, they are known to be areas for trail plugs, they did not disappoint. We came upon the first trail plug around race mile 55 where a 2wd vehicle was stuck, there was a line of trucks and buggies waiting for their shot at the silt trail. There was an opportunity to go up over the hill rather than around, and since we have 4wd, Mitchell got out and spotted as I put the car in low gear and crawled up the hill to bypass the stuck cars. Coming down the other side, we actually got stuck on a boulder but managed to get free and only had a total of maybe 8 minutes of down time. 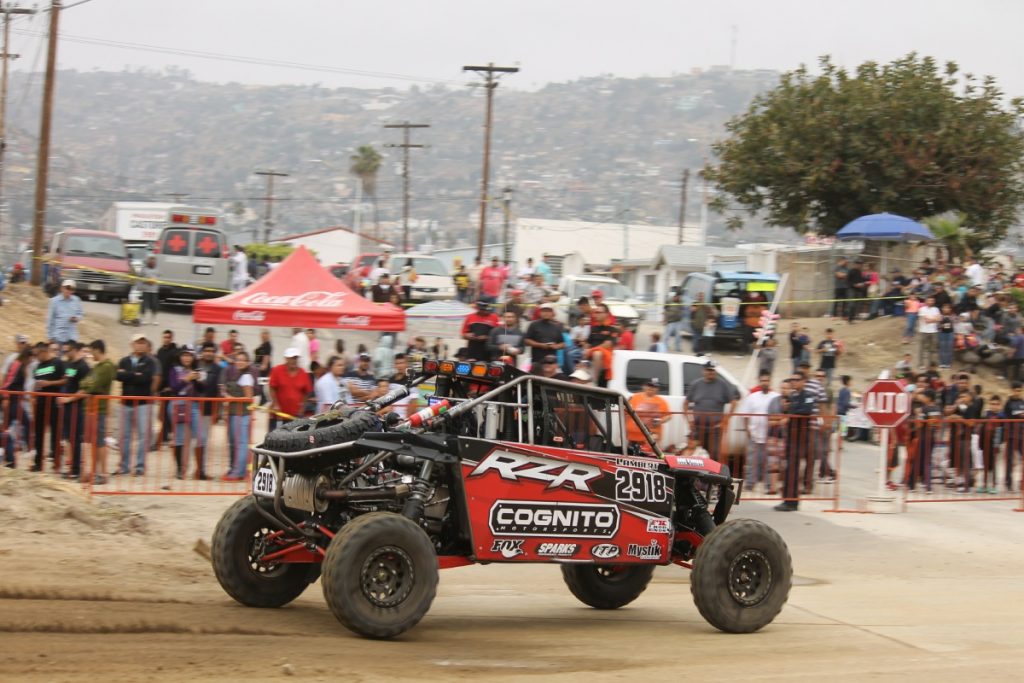 Fifteen miles later there was another trail plug, there was a truck on its side in a bad spot but he was just off the course. There was a hard-left hand turn just a few feet past the truck, with a silty climb of about 80 feet. Vehicles were getting thru this slowly, as when one vehicle would go there was no visibility due to the dust cloud, so a wait of about 30 seconds would give just enough vision to get up the hill and move on, we only lost about 3 minutes in this trail plug. Once we got close to race mail 80 where our support truck was waiting, we went ahead and took a short pit to look over the car quickly since we had done some bush whacking. We were on our way on the 8-mile-long speed zone of 60 mph speed limit and our support crew let us know that Marc Burnett had a ten-minute lead on us, we had let them get around us in the trail plugs. On the highway speed zone, we were right on the bumper of a class 10 buggy and were hoping to make a pass once race speed opened up again. 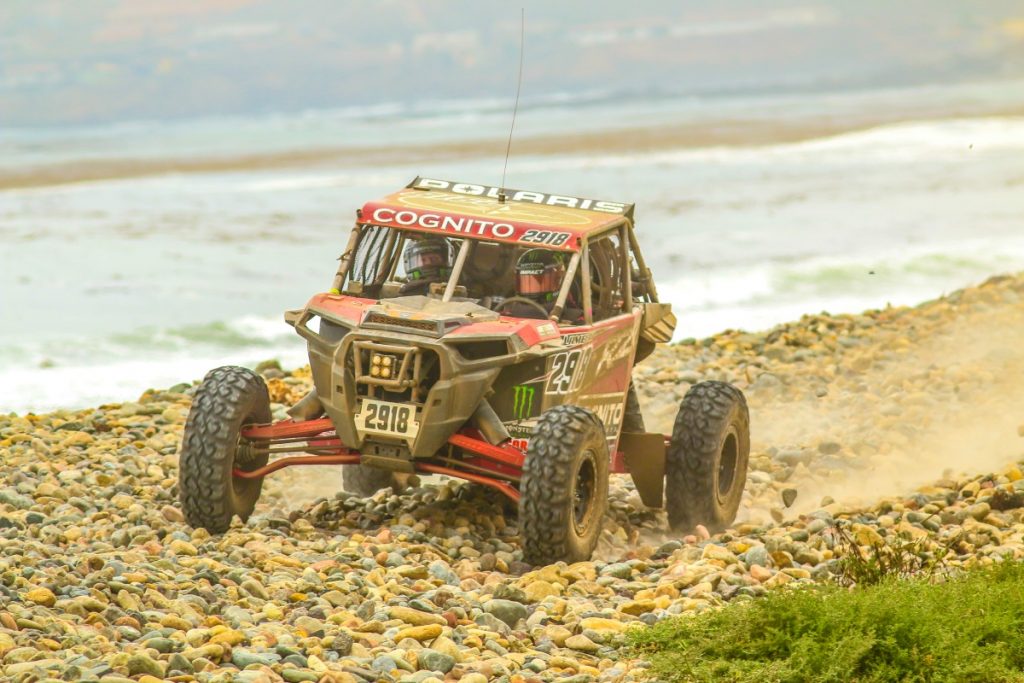 Coming off the highway 60mph zone, we hung a right into the village of Santo Tomas where the speed zone was down to 37mph only for a half mile or so, we were getting ready for it to open up so we could pass the class 10 car, but when race speed resumed he was not giving up his position and fully dusted us out. I couldn’t see and veered off to the left accidentally, hitting a large rock and breaking the left rear wheel causing a flat and the brakes were not right. Mitchell jumped out and changed the wheel and we were back on our way, the brakes were soft but still there. We heard from our pit that there were no UTVs knocking on the back door, and we were off on our way to the coast section. The coast section is fast but as soon as the course starts heading inland, the terrain is really rough. Around race mile 145 we saw Burnett up ahead of us and knew we just put ten minutes on him in the last 60 miles. We could not get around Burnett in this section, the dust was too thick and he would not respond to our pass alert. Our next pit stop was at race mile 155 so we just followed Burnett in to the pit where he stopped as well with his pit support. Mitchell and I left the pit first as Burnett was getting out of his car and removing his helmet, they obviously had a mechanical issue. 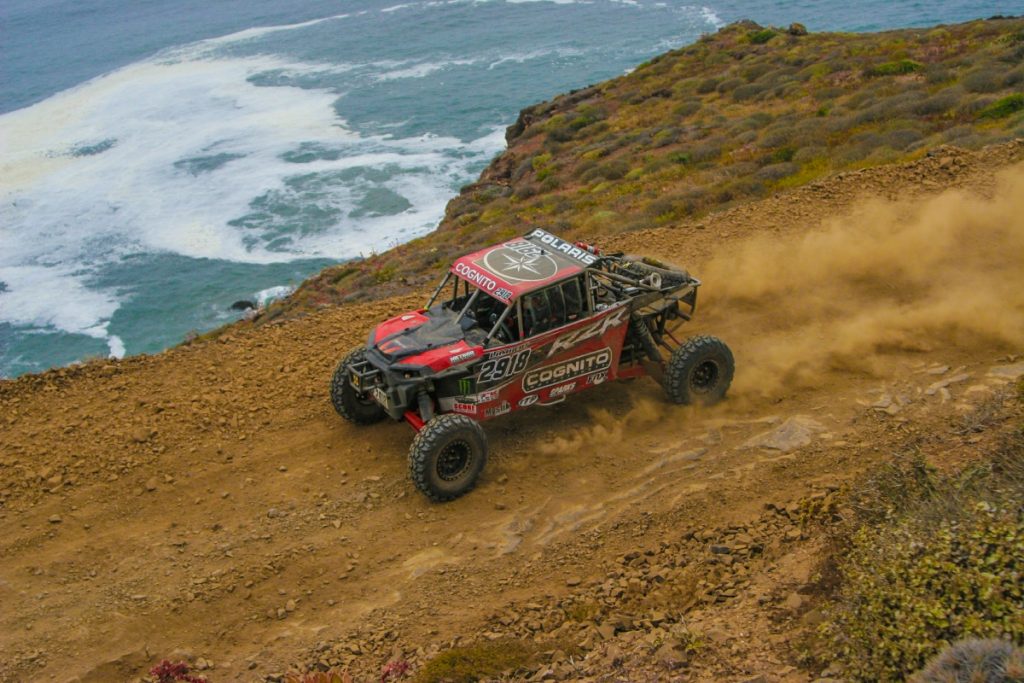 The next section up to about race mile 175 was pretty fast, although there were some man-made hazards like a muddy hill with local spectators all around it that was not there during pre-running. There was a truck stuck in the mud, we decided to bushwhack and go around the mud. At this point we were all on our own, the next section on the way to Mikes Sky Ranch was tight and twisty, and offered some nasty rocky uphill sections also. We made our way past Mikes and then down Mikes road which is tight twisty and fast rally type roads that are a lot of fun. Once we came out of Mikes road we took our next pit stop at race mile 240 where I got out of the car, Mitchell slid over into the driver seat and Justin Herrmann would co-drive with Mitchell while I took a rest. Once our car left the pit, it was 22 minutes before we would see the next UTV come thru which was Branden Sims who then made his pit stop. 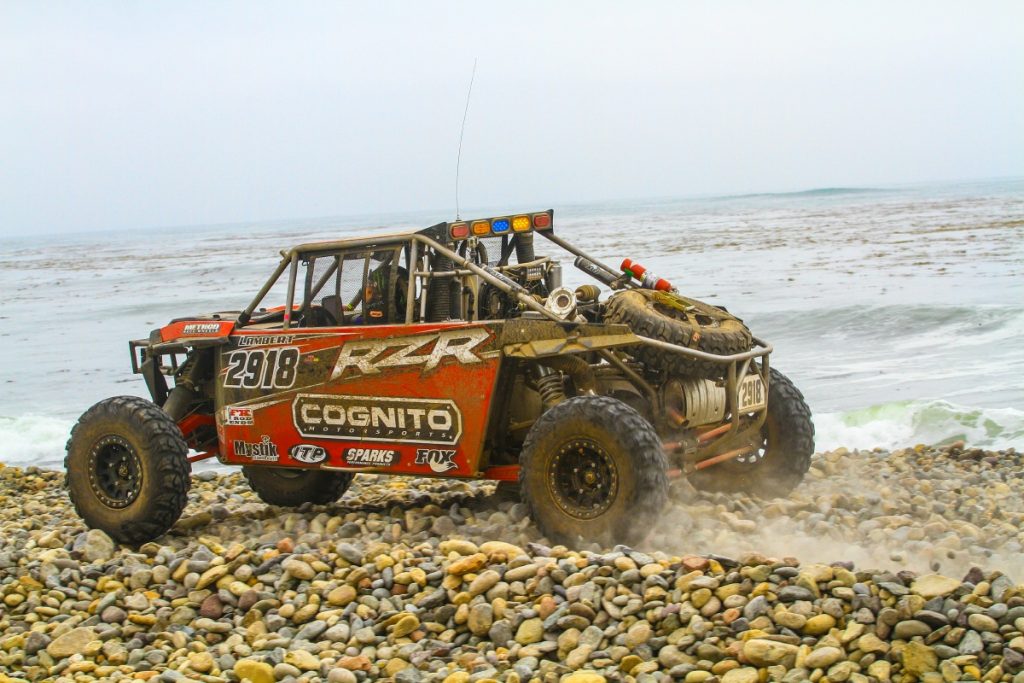 Mitchell had one of the fastest sections which was the Diablo dry lake bed, but then followed by the roughest section starting at race mile 280 and almost all the way to 395. At 395 we had our next pit stop and Justin Herrmann would get out, Mitchell slid back over to the right seat and I would take the driver’s seat again to bring it to the finish. We hit the goat trail section which is slow for a couple miles but then really fast and fun for the next 40 miles. After crossing the highway around race mile 445 and our pit telling us we had extended our lead to over a half hour, there are some more fast roads for 10 miles but then it gets into some of the roughest terrain and we just took our time thru it to make sure we didn’t tear anything up. On the way back in to Ensenada, the hills were really foggy, it was nearly 1am. Our visors were fogged up so we had to open them to see, speeds were slow, but then visibility opened back up and we were doing 80mph for the last 9 miles or so. We made it to the finish line with a large enough margin we didn’t need to worry about any UTVs catching us on time. Winning a Baja 500 is a dream and it feels like I still haven’t woken up! 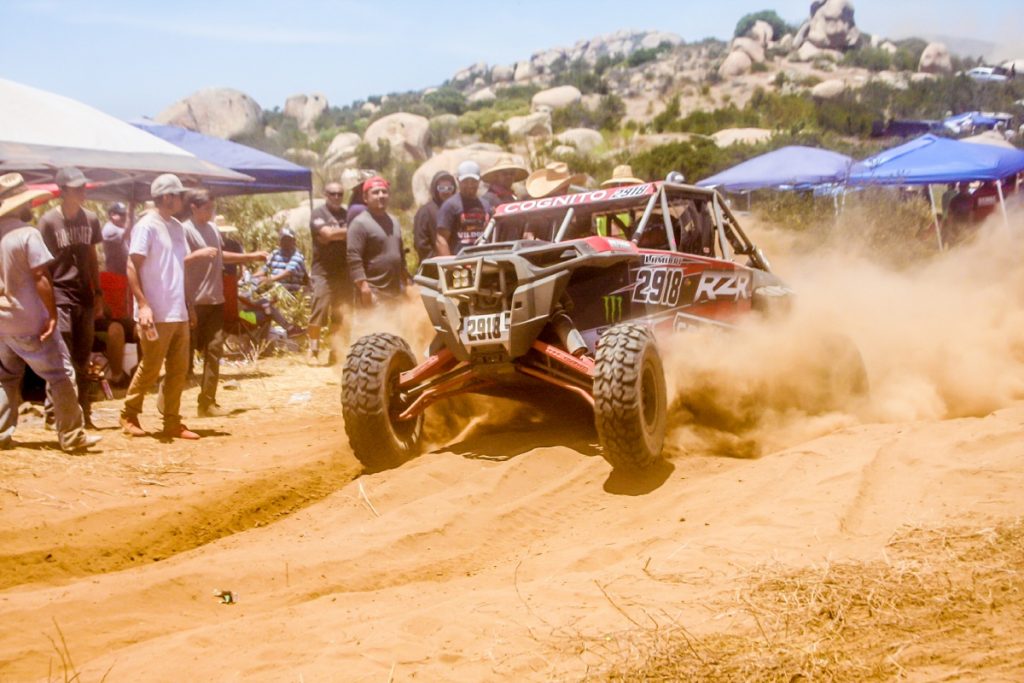 Thank you to the whole team that came down with us, and to those who stayed back home, it takes everyone to make this program successful. I always say ‘to be the best, you have to run the best’ and we have the best sponsors and parts on this car. 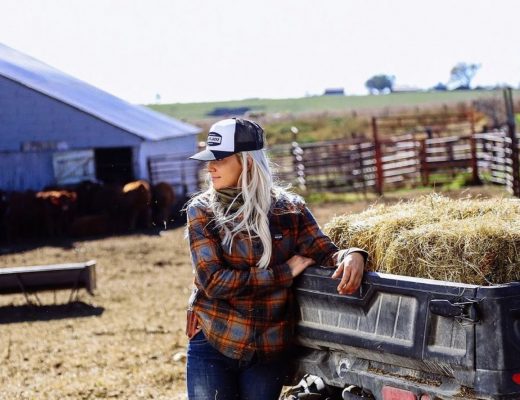