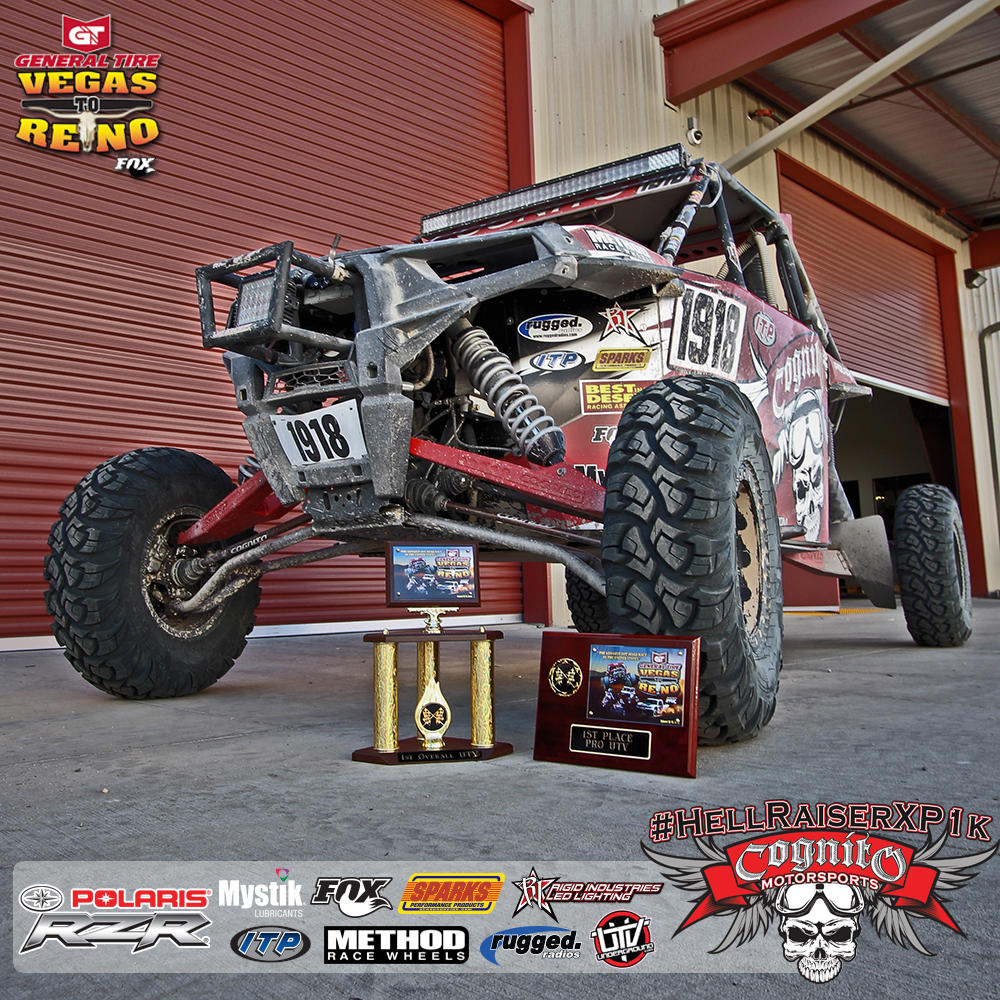 2015 Vegas to Reno was 545 miles, this year the UTV class started behind the trucks and cars later in the morning, rather than early in the morning behind the motorcycles and quads. Starting early means we get a nicer course and we didn’t have that luxury this time, so we anticipated a much rougher race as those big cars and trucks really tear up the course and bring up rocks and silt. My normal co-driver Justin Sheakley started the race in the driver’s seat and had Brandon Hong of Sparks Performance Products co-driving for him. I planned on getting in the car at around race mile 250 with my co-driver Victor Herrera. Our game plan was that Sheakley needed to deliver me a good car but also try not to let anyone get too far out on us, as we started the race in 8th position. 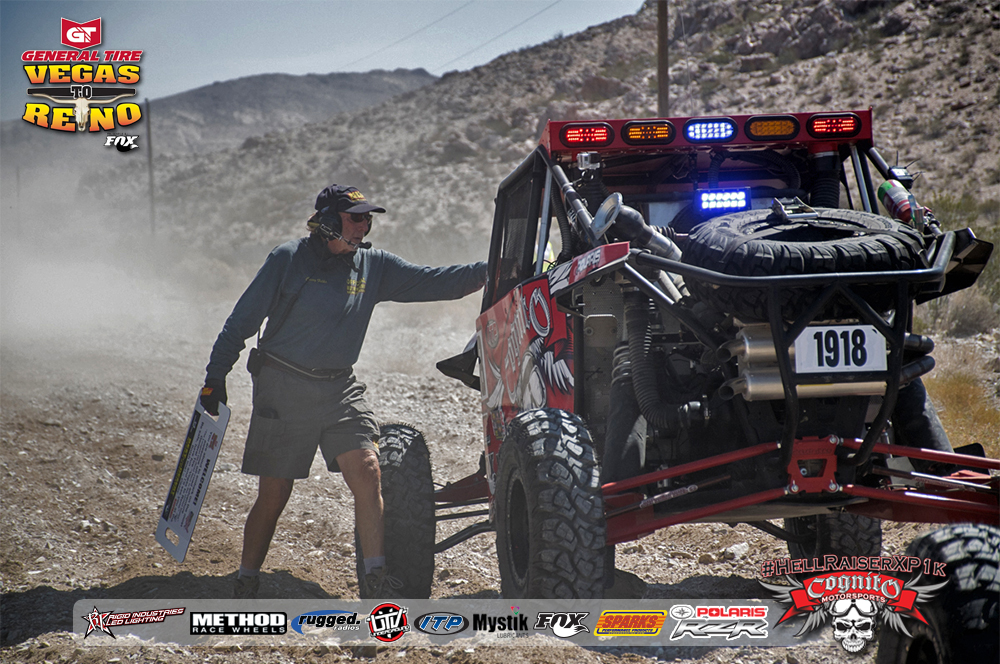 Just before pit 1 Sheakley enter a silty area with a g-out and a rock must have caught the edge of the skid plate just right and ripped the front of it down and was dragging the ground. Both guys got out of the car to see what all the noise was, saw the skid plate dragging and then jumped back in the car and came in to pit 1 where we unbolted the skid plate and sent them back on their way. After pit 2 Sheakley and Brandon caught up to the Supercross car which was driving on 3 tires and 1 wheel, the car was all over the road still trying to move forward, and stirring up a lot of dust. Sheakley lost visual on Supercross in a dust cloud and when they came thru it they realized the Supercross car was stopped in the middle of the road, Sheakley hit the skids but couldn’t avoid rear ending Poelman, everyone was fine. In the meantime in pit 3, we modified the skid plate and when the car came into pit 3, we bolted it back on, took fuel, and they were off again. I was shaking my head at this point knowing that we had most likely just lost the chances of winning the race, but still felt we could earn a podium, we just lost about 20 minutes.

Things were going well at this point, until in the chase truck we got a call on the radio from the race car that they were stuck together with Cody Nygren at race mile 150, about 6 miles before pit 4. They had followed Cody for a few miles in the dust, and figured Cody didn’t know they were there, or he just didn’t want to move over, on the siren Sheakley came close for a nerf and something didn’t go as planned and the 2 cars tangled together and were stuck, thankfully no one was hurt. After about 10 minutes, they got unstuck and proceeded, but Brandon called in and said something was wrong in the front end. We figured broken axle or bent tie rod. The car came into pit 4 and we quickly realized the steering rack was bent. The rack is not easy to change, but we went to work on it as a team and got it apart, spare rack installed, and back together in about 25 minutes, took fuel, and they were on their way again. 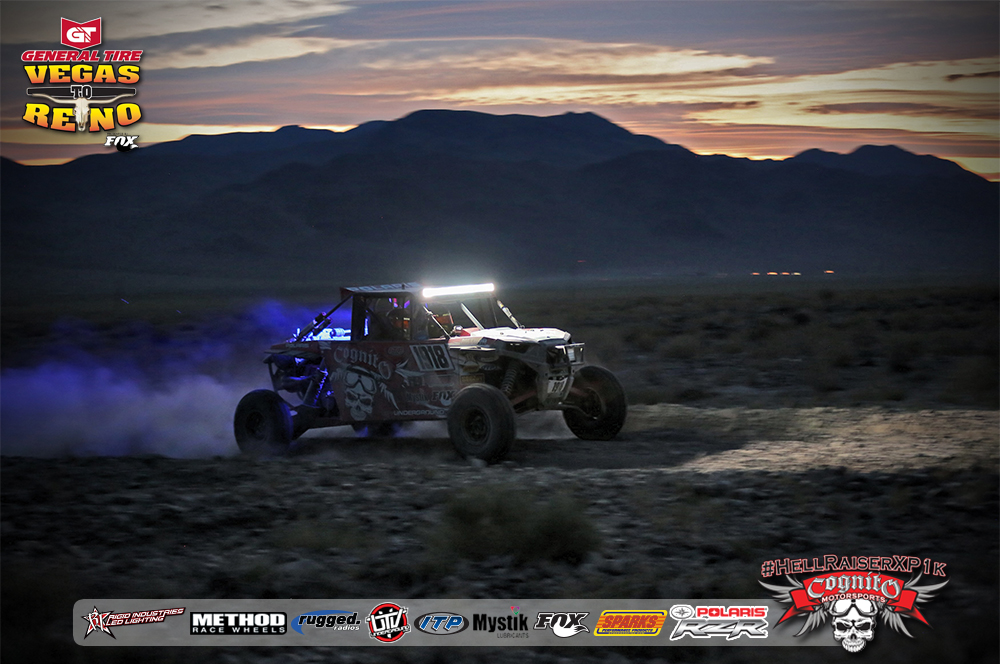 We figured at this point we were about an hour behind whoever was leading, we are shaking our heads as we were confident coming into this race that we were going to win. We moved on up the highway in the chase, making sure not to get too far away from the race car in case something else popped up. We arrived in the chase truck to pit 7 in angst as Victor and I suited up to get ready to get in the car and finish this race off. The car came in and we did scheduled checks and maintenance, switched duties, and we were off again into the desert. The course was pretty chewed up and there were large rocks peppering the course, Jim chimed in on the radio and told me to take it easy as we needed a finish to stay in the championship points contention. I took it easy for about ten miles, and a 7200 truck was coming up behind us about a quarter mile back. I pulled over and slowed a bit so he could get by and then we jumped back on course. This truck must have been having an issue as they did not drive away from us like we thought they would, we were eating their dust for ten miles, then came a canyon with some twisty roads and that is where the RZR really shines, we started getting closer and closer and then we were on the siren and on his bumper, he probably didn’t know we were there as he didn’t move over so we gave him a nerf and he moved over immediately for us, as we took off! At this point I had settled in and was focused, I was pouring it on, it was getting dark and we were hauling ass! We ended up catching another truck and then another class 10 car, they moved over fine since it was now dark and we had our light bar on, they could see us easy and moved right over. 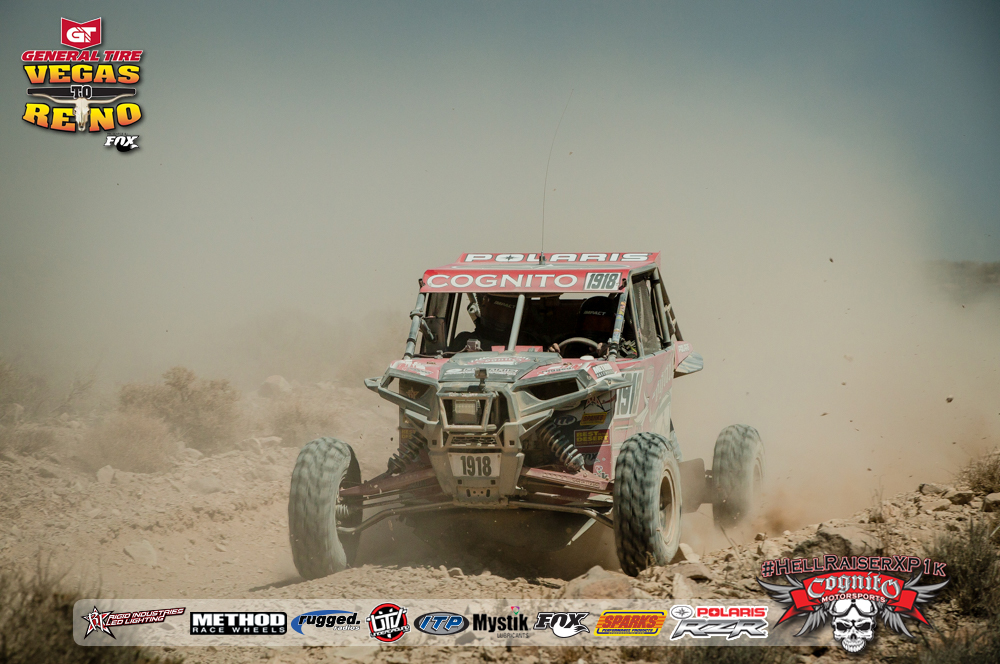 We came thru a pit and I don’t even know which one it was, I was so focused, but there were a couple UTV’s in pit so we were picking up positions. Then on course we came across some nasty silt beds, and another UTV, and then came across Simms standing on top of his car stopped in the silt bed, not sure what happened, we went around and kept moving. We came thru Gabbs which was the pit at race mile 406, our pit told us that Scanlon was in pit still, and that Murray and Schueler had just left 5 minutes earlier. We realized that we were chasing down a podium at this point, there was still 140 miles left to race, we were on the pipe! The next 25 miles was hilly and had a lot of rollers and washouts down in the g-outs in between the rollers. A couple times I could see blue flashing lights miles ahead, then they would disappear, I knew we were catching these guys. 5 more miles went by and I didn’t see any more lights until we came around a hill to the right and then I could see the flashing blue again, but this time closer, we were closing in. 5 more miles and we were within 100 yards of a UTV, with another UTV about 50 yards in front of them. It was Murray and Schueler, Schueler pulled over to let Murray pass and then pulled over again ten seconds later to let us pass; now I had Murray in my sights in that turbo Can-Am, we made it happen and got close enough and they pulled over for us. This was extremely dangerous following them like this, as there were rocks everywhere and I couldn’t see what was coming next until I had clean air. With clean air we were back on the pipe and not sure if we had just passed for the lead or if there were 5 more cars ahead of us, we just didn’t know, but we were not slowing down, we had a podium in our sights. 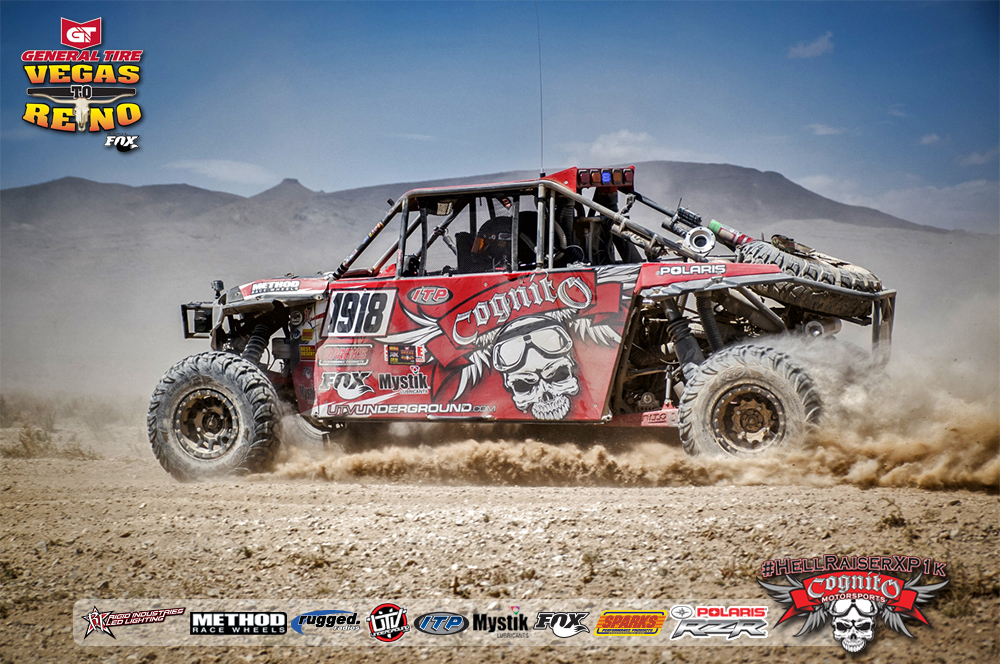 At roughly mile 460, Yancey’s car was pulled over they looked to be changing an axle. We kept charging and around mile 495 I started smelling a little bit of burnt oil, I am think oh great now what? I figured we are going to finish or burn it down, and I was prepared to do both. 5 more miles and we start to see a little bit of dust in the air and the oil smell again, and then we figured the oil must be coming from someone in front of us, well we were hoping it was anyway. At about race mile 505 we see a blue light ahead, we didn’t even say anything to each other, we didn’t want to jinx anything; we were catching the blue light. Another mile and we caught the blue light but it wasn’t flashing, I believe it was a class 2000, we said oh well and passed and kept right along, the oil smell was still there so I was hoping and praying. Then we start to see some dust again, but it is windy so we can’t see any lights, all of a sudden we come around a hill and I see a blue light again. Victor asked if it was flashing, I said no way it must be another truck, as we got closer the blue was flashing, it was the lead UTV, the S3 turbo Canam limping along at about 25 mph, and then we knew where the oil smell was coming from. We blew past them and had about 35 miles to go till the finish, the oil smell was gone, we couldn’t slow down, we started 8th and the 3 UTV’s we just passed started way back, we knew we had to beat them to the finish line by 15 minutes to be safe and cover the calculated time difference. We drove fast, smart, agile, yet risky that last 30 miles and came across the finish first. We waited at the podium watching the clock, we were nervous, the next UTV to come across was Murrays and the news came in that there was not another UTV close enough to beat us, we just won Vegas to Reno.

Thank you to all my sponsors for making this win possible 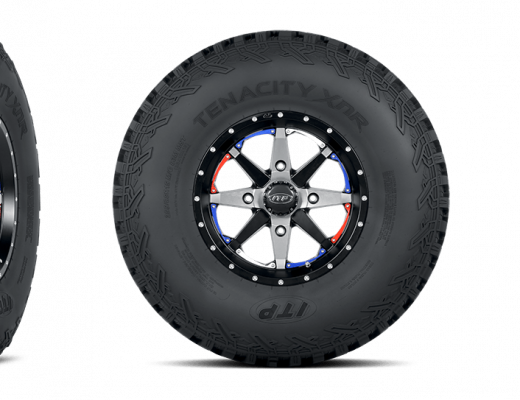 Coastal Racing Takes Best in the Desert’s Vegas to Reno

We are stoked to be jumping in with @phil_blurton

Got Silt? The Mammoth Lakes area can be pretty du

There is one OHV tunnel under Highway 395 in Mammo

Cruising on the Mammoth to June Loop in Mammoth La

Ride to June Lake yesterday and the place was pack

Cruising around the edge of the Obsidian Dome in M

First stop of our day is Inyo Craters in the Mammo