Jeremiah Staggs pulls off a 5th at MINT 400 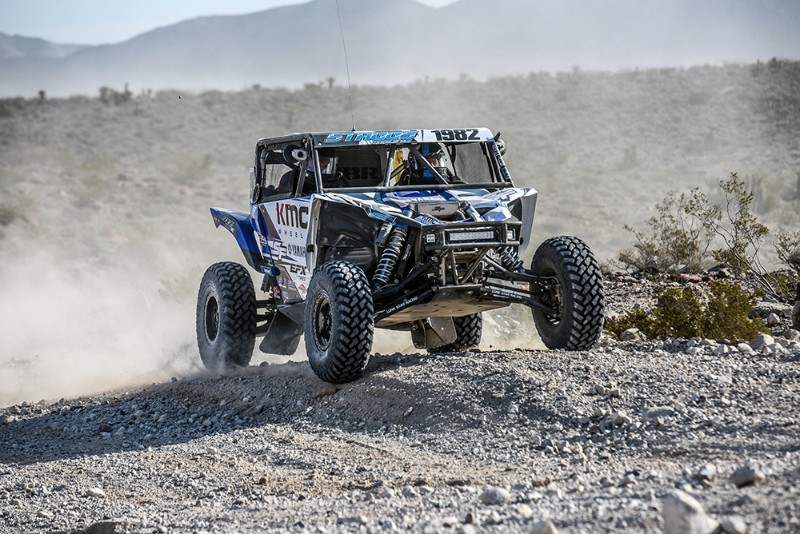 The MINT 400 is the premiere race of the Best In The Desert series. The MINT has a rich history in off road racing. Fans flock to the MINT in droves to be part of the action. Contingency starts just east of the Fremont Experience and go for 6 city blocks. Thursday morning we would hit the road and head Primm, NV to grab a spot in main pit which a friend of ours already secured for us on Wednesday. We dropped the trailer and then head north to watch the Class 1 cars and Trick Trucks qualify. We had an epic spot to watch but my wife would get a rock to the head from some roost of a passing trophy truck. At the time it was scary but no long after we were able to joke about it for a little bit. With all the hustle of the MINT things can go wrong fast. We picked up some food and were headed back to the pits. One of our trucks would turn into the pits to early and get hung up on a drain pipe haha , no damage so we could once again joke about it . At 4:30am the pits were starting to come alive. The flash of blue lights fill the sky. It was 27 degrees and zero wind. Cold and dusty was how the day was going to start but this is the MINT 400. If it was a cake walk everyone would do it. Around 5am we pulled into the staging line. 106 UTV’s were scheduled to race and we were lined up with 80 machines in front of us. It was starting to look like everyone with a UTV showed up for this race. It was finally our turn. The green flag dropped and flew over the first couple jumps. Pushing hard at this stage of the race is a poor decision. You cant win the race on the first lap but you can definitely lose it. Staggs Powers Through the Rough Course in his Yamaha YXZ1000R

We decided to take it easy first lap and mark on-course dangers. This proved to be a great strategy after seeing the course littered with racers who pushed early in the race and lost it all. We would make our way half way through lap one and our brakes started fading, I was having to keep pumping them through out the rest of the first lap. As we came around the track section beside Buffalo Bills hotel and would hit some of the jumps I noticed the brakes getting worse. We radioed the pit crew to let them know of the issue as we come in. The crew was fast to look over the car and find the issue of a loose hub. Some quick repairs, fix the brakes and get us fuel and we were back on course. Another new addition to the KMC Yamaha YXZ1000R at this race was our Walker Evans Racing Velocity Shocks, this made a huge difference in how the machine was handling. The confidence to finally push through the rough desert and handle great was long awaited. We started passing cars and making up time. Big boulders and new exposed rocks had been unearthed in the sand from all the race cars, at mile 28 we would come in contact with one of those demon rocks and have to pull over to make repairs. My co-driver had a issue with a jack and I want to thank another team who was out of the race for helping him change it and let us use there jack that was awesome. We would get back in and start charging again. My co-driver would radio in to pit A and let them know we would need the spare on the car changed out with a new one and to give the car a good look over. They were quick with us in pit a and we were on our way again. Hitting speeds of 90 mph over the dry lake bed the KMC was on rails. The new Walker Evans shocks made the car very easy to control. Pulling into pit B and the crew checked us over as we passed by and give us the thumbs up. We pushed through long big sand whoops sections, rocks, lake beds and silt sections. The punishing MINT course was getting worse lap after lap. As we came trough main pit completing lap 2. The crew would give us fuel and look over the car and we were off on lap 3, they also informed us we had lost some time and we around 12th in class now. Leaving main pit and charging up that grueling rocky wash for the last time. The 3rd lap of the MINT 400 is bitter sweet. The braking bumps and square edges rattle your thoughts but high speed roads and majestic landscape keep you wanting more. Our bodies were starting to get fatigued and the punishing course was taking its toll on the car. We would charged hard , stay smooth and keep the car together through pit A. At this point this stage of the race the Trick Trucks were on course and closing in fast. We could see the first truck cresting a hill in the distance but at 120mph they caught us fast. From that point on that last 15 miles of the race we would get passed by the superstars, one roosting us and hitting my co-driver in the shoulder with a huge rock, he is ok of course and we would make it across the finish line…. we conquered the grueling Nevada desert and the 2017 MINT 400. Words cant describe the feeling to finish this race let alone 5th in class. At the end of the day this is a team effort. Now it is time to regroup, prep and get ready for the UTV World Championships in mid April.

Jeremiah Staggs is Sponsored By: