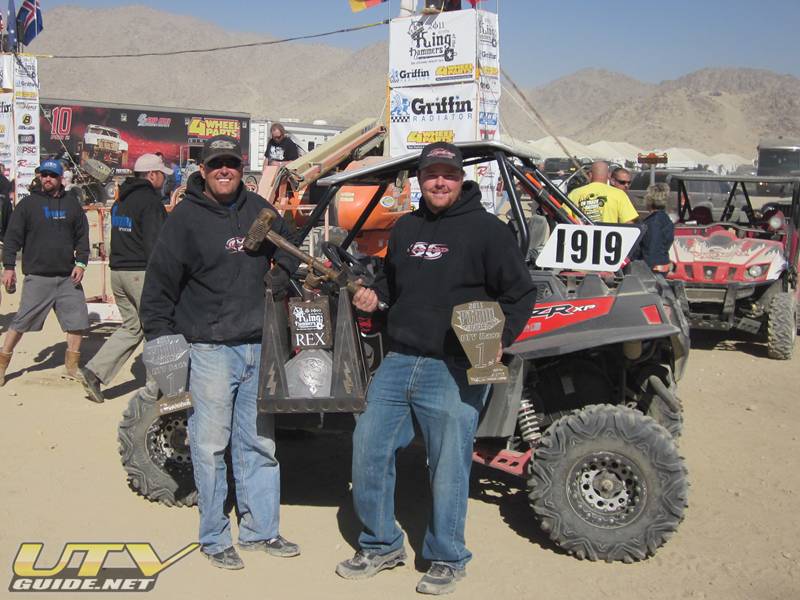 Minneapolis, Feb 15, 2011– After three years of racing “King of the Hammers”, the Jagged X team won the side-by-side class with the new and nearly-stock Polaris RZR XP 900!

Since its original debut in 2008, the “King of the Hammers” race has been deemed the toughest off-road race in the world. The course is a 42-mile combination of open desert racing, narrow goat trails and huge rock trails. For the last two years, the Jagged X team raced their desert race car and while they were in the hunt, the heavier full-blown race car came up just short of the win. This year, the team took a little different approach and raced the new and nearly-stock  RZR XP 900. The unit was modified only to comply with the safety requirements and equipped with a set of Elka Elite series shocks.

With the temperature hovering in the low 20s, the Jagged X team lined up in the tenth starting position with seventeen other side-by-sides. When the flag dropped, Brandon Schueler and co-driver Mike West charged off into the California desert with a group of very-well equipped competitors. The  RZR XP 900 did an amazing job of reeling in the rest of the field and by the first rock trail, the team was running in third position. Shortly after, the only car between the No. 1919 and the finish line was the two-time winner Mitch Guthrie, also driving an almost-stock, very nimble and quick RZR 800. The two were separated by only a few feet for the next 15 miles but then in the last major rock section, known as Aftershock, Schueler was able to squeeze by and capture the lead. The two swapped the lead again in the bottom of the canyon but when the dust cleared, Jagged X came out ahead by nearly five minutes ahead of Guthrie, and the rest of the field was nearly an hour back.

“The new RZR XP 900 proved once again that Polaris is the only manufacturer to build a car that offers the power, suspension and agility to win one of the toughest races in the world,” said Brandon Schueler. “Jagged X would like to thank everyone who helped us to take the crown and become the KING of the HAMMERS!”

With annual 2010 sales of $1.99 billion, Polaris designs, engineers, manufactures and markets off-road vehicles (ORVs), including all-terrain vehicles (ATVs) and the Polaris RANGER™, snowmobiles and Victory motorcycles for recreational and utility use and has recently introduced a new on-road electric powered neighborhood vehicle.

Polaris is a recognized leader in the snowmobile industry; and one of the largest manufacturers of ORVs in the world. Victory motorcycles established in 1998 and representing the first all-new American-made motorcycle from a major company in nearly 60 years, are rapidly making impressive in-roads into the cruiser and touring motorcycle marketplace. Polaris also enhances the riding experience with a complete line of Pure Polaris apparel, accessories and parts, available at Polaris dealerships.

Polaris Industries Inc. trades on the New York Stock Exchange under the symbol “PII,” and the Company is included in the S&P MidCap 400 stock price index.