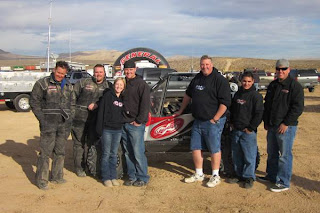 Minneapolis, December 8, 2010–The “Trans West Ford Henderson 250” marked the final race for the 2010 Best In The Desert racing season. Lots of energy surrounded this race as many of the class championships were to be decided on the outcome, including the 1900 Pro UTV Championship.

Coming into this race, there were four teams with a real chance to become the UTV Class Champions for 2010. Playing out all of the different scenarios on paper meant nothing once the flag dropped on Saturday morning as more than a dozen of the best-built UTVs in the world headed off into the desert to settle the score. The Jagged X Polaris RANGER RZR S 800 left the line in the sixth starting position and had only gone a few miles before encountering a small fuel issue which forced the team to pull over and remedy the problem, losing nearly 10 minutes of valuable time.

Once they were back on course, Brandon Schueler wasted no time working his way back to the front of the pack. By the end the first lap the Jagged X No. 1919 car was running in the fifth spot and Schueler was able to battle his way to a third place finish securing the points championship for the 2010 season.

“2010 has been a very challenging season for the No. 1919 Jagged X/Polaris Racing Team,” said Bill Schueler of Jagged X. “After the loss of our primary car at the Silver State 300, it has been very exciting to be able to battle back to win another championship.”

“We congratulate Jagged X on their fourth Best in the Desert championship,” said Craig Scanlon, director of Marketing and Sales for Polaris’ Off-Road Vehicles Division. “The team overcame a very difficult season but prevailed due to their incredible dedication to the program.”

With annual 2009 sales of $1.6 billion, Polaris designs, engineers, manufactures and markets off-road vehicles (ORVs), including all-terrain vehicles (ATVs) and the Polaris RANGER™, snowmobiles and Victory motorcycles for recreational and utility use and has recently introduced a new on-road electric powered neighborhood vehicle.