JAGGED X IS SMOKING HOT AT THE SILVER STATE 300 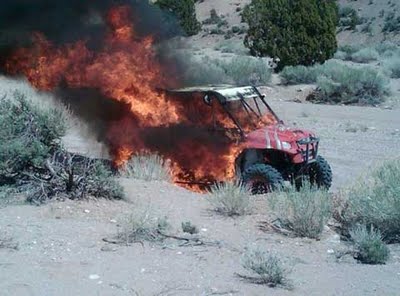 Well so to speak anyway, the Jagged X / Polaris Racing team headed to Las Vegas last week with high expectations and lots of positive energy after taking the win at the Parker 250 in January. This Silver State race marked the 22nd BITD race for Jagged X since teaming with Polaris at the beginning of the 2007 race season. Since then the team had racked up a perfect record of 21 finishes – the majority being wins or podium finishes – complete with three class championships. An unprecedented achievement in UTV racing, let alone most other classes of desert racing. Deep down, our entire team knew that eventually fate would deal us our first DNF. We had no idea that our first DNF would be quite so dramatic.

With plenty of time to prepare and ample testing under our belts we headed to Alamo, NV at 4:00 am on Friday morning feeling pretty good about our chances for this race and hoping to add momentum to this young season. Brandon had drawn the 2nd place start position, so the plan was to try for some clean air early and stay ahead of the trucks and buggies all day if possible and hope for a podium finish or even better yet, a win.

The Irritrack had us leading the field coming into pit one so we all gave a thumbs up and headed towards pit 2. About the time we had a visual of the 1919 coming across the valley Chad radioed us and said the car was flat and not running right? (scratch heads) “Okay, get it in here, lets check it out”. The motor had a severe stumble and the idle was way off. We are not used to having engine trouble so we started going over each system one by one checking and replacing parts as we managed to burn up nearly two hours. The final determination was that the TPS had failed. We changed the throttle body assembly and problem solved! Hopes of a win were diminished but we were going to finish and so we sent Brandon and Chad off again with fingers crossed.

All reports were that the car was back to 100% and they were trying to make up some valuable time as the trucks and buggies began catching us near pit 3. A splash of fuel at pit 4 and all was still well. Our chase team headed to ward pit 5 still feeling good that we were still possibly in the running. As we waited in Caliente our team moral was up and we were happy to be still running strong. Justin had gone down pit road to help Yancy Reynolds with some minor problems on their Polaris RZR. Then came the “call”. It was our co-driver Chad Riccio.
“We’re out of the race, the car’s on fire!”
“Excuse me? What do you mean, the car’s on fire?”, I said!
“It’s burning, BIG flames, BIG BIG flames” was the response, “get someone here quick, we can’t put it out. We’re both okay but get someone here fast.”
About that time we lost service and were disconnected but I knew this was no joke. Several minutes later I received a pix message on my phone confirming that our teams flagship race car had flames shooting ten feet in the air.

I had already initiated contact with BITD on the radio and within minutes their amazing staff had their main man Donald on site. I must commend BITD for their amazing performance handling the emergency. Donald was able to pull the car off the course and bring our drivers back to the highway where we were instructed to meet them. KUDOS to BITD truly proving once again that they are “The Best in The Desert”.

We really have no idea what caused the fire and never will. Unfortunately the race car is a total loss. The pictures really don’t even do justice for the incredible damage fire causes. The most important thing to mention is, thank god that our drivers (my son and my friend) were not injured. Clearly this is the worst day of racing we have ever had. We are working on devising a plan to get a new racer on the fast track and we plan to show up at the Bluewater Grand Prix ready to start over and get back to racing.

We want to thank all of our friends, suppliers and sponsors who have pledged their support and for all of their kind words and gestures. It means so much to have a great team behind you. The 1919 team will be back!