Jackson Rancheria Off Road Team takes on the VORRA USA 500 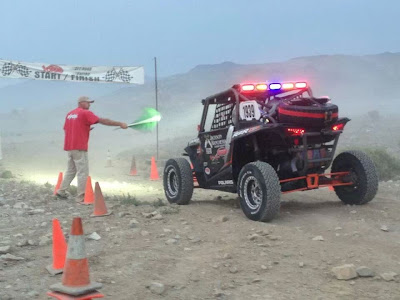 The #1939 surprised everyone when they pulled a freshly outfitted RZR XP 1000 out of their trailer for the race. The UTV was picked up at Cal Custom Trailer & Motorsports a week before the race and race readied for the desert in 4 nights.

Other than smoke from the Rim fire the weather was great for racing. Race time was 6AM Sunday morning and the #1959 was first in class off the line followed 1 minute later by the #1939. With the heavy traffic of the trucks and buggies that started prior to the UTV’s the dust was thick but the #1959 was quickly moving through the slower vehicles with the #1939 right behind. Both UTV’s were using the same radio frequency so they could keep each other abreast of any issues. At mile marker 22 the #1939 radioed in with a tire issue, after stopping they would find out they actually had bent a rear radius arm and wheel. This did not deter them as they limped their car through the balance of the lap and back to the pits for repairs.

Meanwhile the #1959 kept charging through the first lap and into lap #2. A blown CVT belt and flat tire slowed them a bit but they had got into a rhythm and were pacing themselves for a grueling 520 miles as the 65 mile course was already getting chewed up. After a quick co-driver change the #1959 was off for lap 3, but unfortunately lady luck was not with them as at mile marker 12 the engine started to run lean and they were forced to pull over at mile marker 14. It was decided to take the main road back to the main pit to see if the race could be salvaged but the Jackson Rancheria pit crew was unable to diagnosis the problem and the #1959 was forced to call it a day after 144 miles. 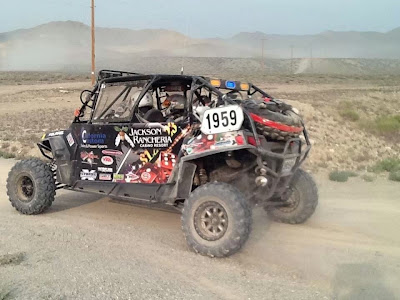 Now it was time to concentrate on the #1939 and bring the new RZR XP 1000 home for a finish. The pit crew had managed to repair the arms and the car was back out on the track making up time. Lap 2 was uneventful except for a lost spare tire that was found on lap 3. Coming into the pits after lap 4 it was found that the right rear wheel studs were damaged as well as the left front lower A arm, these were quickly repaired and the car was back out for lap 5. A flat tire on lap 6 but the UTV was holding together. Back in the pits they had calculated that with the track getting rougher and slower the #1939 was going to be within 30 minutes of beating the 20 hour time limit for the race. Lap 7 went smooth and they team was on pace to finish the race. Lap 8 took a turn for the worse at mile marker 34, once again the wheel studs on the right rear had broke. Some quick thinking on Robert’s part and studs from the other good wheels were robbed to get the car to Pro Pit at mile marker 43 for permanent repairs.

Upon entering Pro Pit the #1939 was informed that they had 10 minutes to exit the pit or they would be forced to time out. As usual the guys at BFG were quick and efficient with their repairs and the UTV left the pit with 5 minutes to spare and 47 minutes to finish 22 miles, of course after a long day this portion of the track and turned in to the slowest part of the course. The team pushed to the finish and the brand new RZR XP 1000 was able to finish with 7 minutes to spare.

As desert racing would have it the attrition rate was high and they found themselves taking the 1st place in the UTV class as well as 11th place overall in the race.

The Jackson Rancheria Off Road Race Team would like to thank all of their sponsors who helped in their racing efforts:

About Jackson Rancheria Hotel and Casino

Funco Motorsports Expands to be the Kawasaki Teryx Aftermarket Superstore