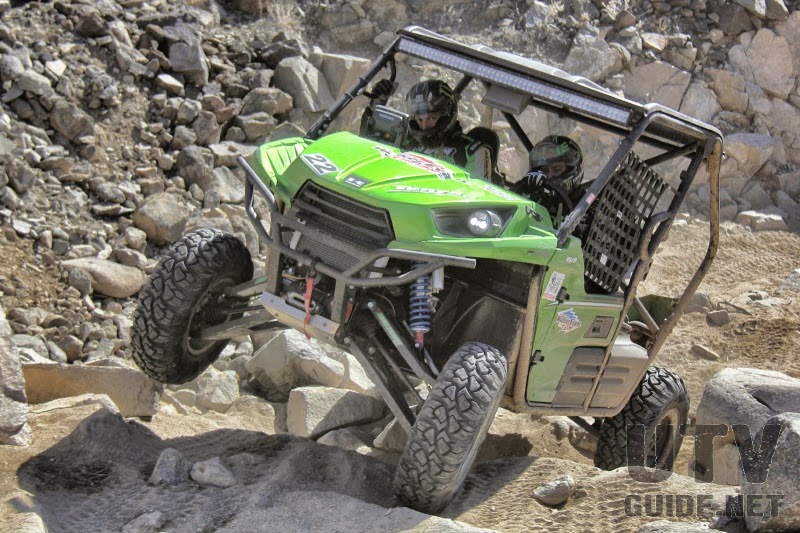 Currie and co-driver Trad Fondeldt competed with roughly 50 other side-by-side vehicle pilots at KOH this year. However, Currie was one of just five total finishers in two classes to complete the ultra rugged, two-lap course, which featured challenging sections with names like Crowbar, Chocolate Thunder, Jackhammer, Aftershock and Clawhammer. Currie not only masterfully won the Amateur class in a time of 7:27:04, but also took second overall, besting all but one Pro class driver along the way.

“The course was extremely difficult this year – having nearly the same course as the Every Man Challenge – but the Monster Energy, Walker Evans Racing Kawasaki Teryx had almost no issues,” said Currie. “The winch line broke going up Jackhammer, but fortunately we were able to tie it in a knot and keep on moving. The 30-inch ITP UltraCross tires withstood over 125 miles of torture crossing the brutal desert and the jagged rocks, while not forfeiting any traction or adding any unnecessary weight.”

Currie, who has now finished two straight KOH races in consecutive years, suffered a DNF due to a mechanical (not a tire related issue) in his first attempt in 2013. A year ago, he took second in the Amateur class and second overall, being one of only 10 entrants in two classes to complete the KOH course. He said he chose not to upgrade to new 30-inch ITP UltraCross tires because his current tires were still in perfect condition. “They have lasted three KOH races as well as multiple trips to the desert for testing and practice with little wear,” said Currie. “Cody continues to impress us with his skills and, obviously, with his choice in tires for this grueling race,” said Ryan Edwards, ITP tech support rep and West Coast race coordinator. “It’s not easy to finish a King of the Hammers, as one can see from the rate of attrition, but he’s made the podium for two straight years running the same ITP UltraCross tires. This says a lot about our tire as well as Cody as a precision driver.”

The UltraCross R Spec 30-inch tire continues to prove itself in the most extreme terrain imaginable, from the demanding Baja 1000 to the rock-laden KOH. Along with being available in 10 sizes, the 8-ply ITP side-by-side tire offers radial construction, a versatile tread pattern and exceptional wear and puncture resistance.

Updates to the 2012 Polaris RZR XP