Ontario, California, August 21, 2014 – Team ITP Pro-level side-by-side racing teams competed in three different off-road series over the August 15-17 weekend, earning several podiums along the way. At the 2014 Heartland Challenge in Iowa, Marcus and Mouse Pratt took the UTV Open class win on ITP tires. At the Vegas To Reno leg of the 2014 Best In The Desert series in Nevada, the Murray Racing / Can-Am / ITP team scored a third-place podium finish as three ITP-backed teams earned top-five finishes in the 1900 P class. And Nick Thompson took second place in the Pro 1000 class at round seven of the Dirt Series in Southern California.

“We had some good results this weekend competing in several different events in three different states. I couldn’t be happier for the Pratt brothers, who have worked their tails off all year to put ITP on top of the box no matter what series they compete in. They proved that ITP is THE tire choice for competing in such demanding race as the 4-hour Heartland Challenge” said Pat McGuire, Public Relations / Race Support.

The 2014 Heartland Challenge endurance race featured several different classes for ATVs and side-by-side vehicles. However, unlike last year’s dust fest, this year’s event offered much better course conditions, despite heavy rains Friday and light rain on Saturday. The challenging hills, complete with new rain ruts and traction grooves and manmade obstacle course kept all the racers honest in their approach and strategy. ATV racers competed for 10 hours, while SxS teams circled the course for four hours.

Despite a poor start and venturing off course – which ultimately required more time to catch the leading teams – pilots Marcus and Mouse Pratt (Team Jack’s Excavating / Can-Am / ITP) managed to outlast all the other SxS teams to notch their first career Heartland Challenge victory. They won the UTV Open class, completing the four-hour race in a time of 3:53:48, and took the overall as well against more than 50 others.

Described as America’s longest off-road race, the Vegas To Reno leg of the Best In The Desert series is popular for its location (both in the US and Las Vegas), the challenging Nevada desert and the fact that it is a double-points round. The 2014 course, which measured some 530-some miles, was more difficult because heavy rains created plenty of erosion and ruts as well as a course reroute over a dry lake bed. Even the promoter, Casey Folks, had to remind drivers to remember that the first 20 miles and last 20 miles of the course are notoriously treacherous due to the extremely rocky conditions. In other words, teams had to pace themselves as well as push themselves to earn a podium at this round.

For the Murray Racing / Can-Am / ITP team, the Vegas To Reno round meant a chance to earn valuable points and climb in the class 1900 P (UTV Pro) standings. Brothers Derek and Jason Murray, who sat fifth in the class point standings coming into the race, did just that with a solid third-place podium finish in Nevada. Despite starting 18th, Derek put the hammer down and was able to climb into the top 10 (eighth) after the first 200 miles. Once Jason took over, the team gained even more positions, moving into third place and podium contention. Derek resumed control of the No. 1917 Can-Am Maverick shod with 30-inch ITP Ultracross tires and pushed hard all the way to the finish. With a time of 11:44:31.261, the Murray team ended up third overall for their best BITD finish of the year.

“We managed to pull a podium spot for the fourth time in five years at this race. The Can Am ITP Maverick ran perfect all day. This makes 29 consecutive BITD finishes for us,” said Derek Murray.

Nick Thompson scored a huge second-place finish in the SxS PRO 1000 class at round seven of the Dirt Series held at Lake Elsinore MX Park in Lake Elsinore, Calif. The podium finish was not only his fourth time on the box for the season, but it also propelled him into the class points lead heading into round eight at Glen Helen. Thompson currently holds a four-point lead with his No. 176 Polaris outfitted with ITP Black Water Evolution tires. 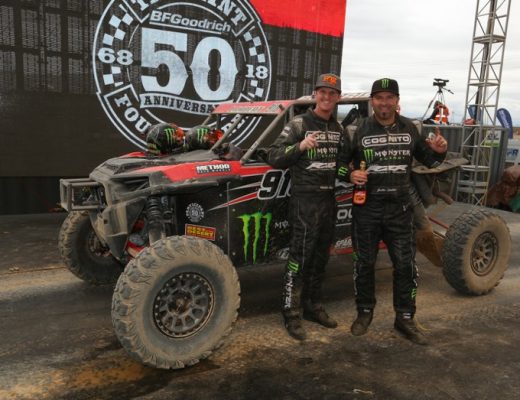