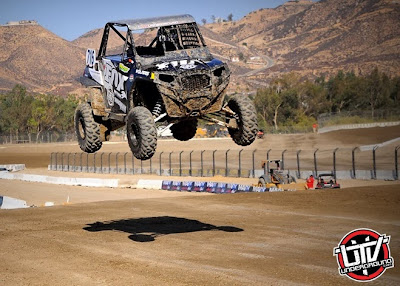 At round six of the Lucas Oil Off-Road Regional Series at Lake Elsinore MX in Lake Elsinore, Calif, Cody Rahders (UTVunderground / FOX / Magnum Offroad / ITP) won his class and clinched the 2013 RZR XP900 Class title in the process by winning the LOORRS Shootout event. Coming into round six, Rahders held a two-point advantage. However, after taking the top spot in qualifying, he had grown his lead to three points. Knowing he just had to finish behind the top spot or win to secure the RZR XP 900 class title, Rahders gave it his all during the 12-lap main event. Even a second-row start couldn’t slow him down, as he grabbed the lead by turn two and then checked out for his second win in a row.

“I felt good. The car ran great,” said Rahders in his official release. “FOX had my shocks dialed, and, even with two races on them, my ITP tires were still hooked up. I just got out front and laid down laps. My spotter was even telling me to slow down at one point but that can be risky, so stayed in it until I saw the checkers.”