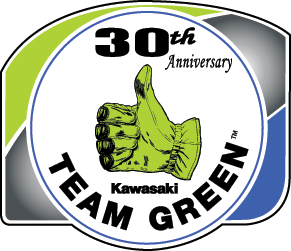 In honor of the 30th year of Team Green, Kawasaki created a short film to showcase what the legacy of Team Green has meant to the racers of today. The film highlights Team Green riders Adam Cianciarulo, Stilez Robertson, Darian Sanayei, Destry Abbott, Justin Soule, and Chad George.

The film is now on iTunes and can be found by either typing in “grassroots, kawasaki” in the search bar or you can also click here for a direct link to the Kawasaki page of iTunes.

2011 marks the incredible achievement of a successful 30 years of Kawasaki’s Team Green program. Whether it’s helping fuel the dreams of young dirt bike riders becoming professional champions, supporting the professional off-road rider in quest for the podium, or adapting to new forms of racing such as side-by-side competition, Team Green has been there for its racers year in and year out to support big dreams in all shapes and sizes.

To celebrate the great accomplishments of the one-of-a-kind program, Kawasaki will premiere a short film during the Thursday night festivities at the AMA Amateur National Motocross Championships at Loretta Lynn’s. Check out a sneak peek of the film today.

RANGER RZR Introduces a Whole New Class of Side x Side