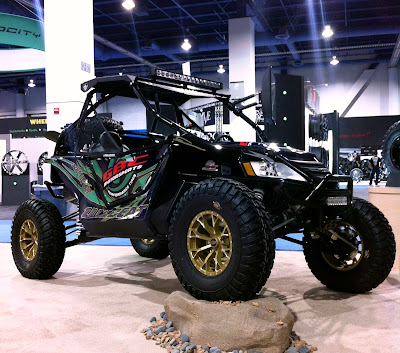 Anaheim, Calif. – November 15, 2012 – GBC Motorsports had various tires and wheel kits on display with parent company Greenball at the 2012 SEMA Show in Las Vegas, NV. Between best-selling tires, new sizes, and new models, GBC showcased a full lineup of ATV & UTV tires for all purposes.
The highlight of the show was certainly the Arctic Cat Wildcat 1000 build, featuring the Kanati Mongrels mounted on No Limit Venom wheels. Built by the crew at SXSPerformance.com, this Wildcat featured the following contributions from some of the most respected companies in the industry:

Combine these components with a vehicle like the Wildcat 1000 and you have a GBC machine capable of conquering anything in its path.

GBC Motorsports also revealed its new models of cross country tires, expected to hit the market in early 2013. Stay tuned to www.gbcmotorsports.com for news on upcoming models and sizes. Follow us on Facebook and Twitter for updates on new releases and product availability.

GBC Motorsports Offering Over $80,000 in Contingency for 2016 BITD Series

Round 7 of Lucas Oil Race Momentous in Utah