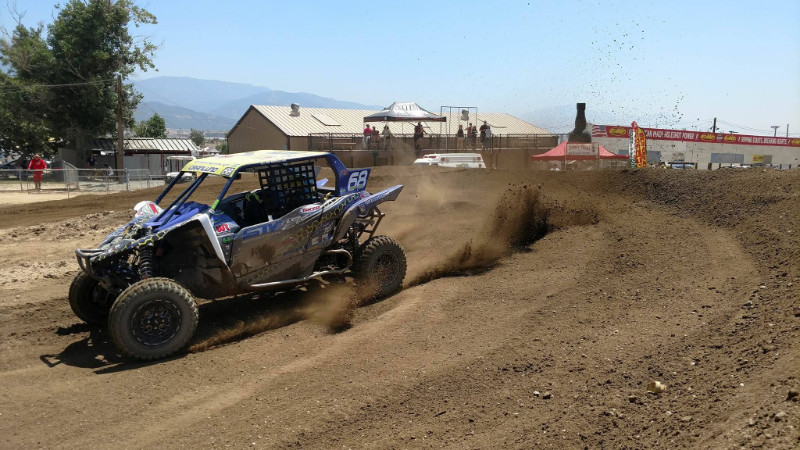 Anaheim, Calif. – June 15, 2017 – GBC Motorsports racers on the west coast are in mid-season form as the Dirt Series and Quad X Series reach the halfway point of the 2017 season. GBC Motorsports is a proud supporter of these series and has traditionally been well-represented at some of Southern California’s most famous tracks.

Dirt Series – Round 4 at Competitive Edge
Troy Barker paved the way for GBC racers in the UTV classes. Barker picked up where he left off in Round 3, once again winning both motos and taking the UTV Unlimited class victory. Jacob Peter’s pair of second place finishes earned him the overall win in the UTV Open 800 class, while Casey Sims finished 3rd and Alyssa Herrera finished 4th.

Dirt Series – Round 5 at Glen Helen Raceway
The sun was and temperatures soared into the 90s out at Glen Helen Raceway in Devore, CA as the Dirt Series and Quad X Series collided for an epic Sunday of off-road ATV and UTV racing action. This marked the second round of the Quad X Series while the Dirt Series reached its halfway point with Round 5 at the world famous motocross track, just one week after hosting the Lucas Oil Pro Motocross National.

Nic Granlund enjoyed just about as much success as is possible during this race weekend. Granlund was on fire in his Dirt Series motos, winning the UTV Pro 1000 class in his Mongrel equipped Yamaha YXZ1000R. Sierra Romo and Randy Romo finished 2nd and 3rd, respectively, to give GBC Motorsports the UTV Pro 1000 sweep.

Granlund completed his perfect Dirt Series appearance with a pair of moto wins and the overall victory in the UTV Unlimited class. Larry Heidler proved he is enjoying his new Turbo, finishing 3-2 in the Unlimited class motos and joining Granlund on the podium in 2nd place overall.

Claudia Romo was having some mechanical difficulties with her car, but remained focused and pushed through to grab 2nd place in the UTV Production 1000 class. Casey Sims added a 1-1 sweep in the UTV Open 800 class, continuing his season-long streak of podium finishes. Jacob Peter finished 3rd in the Open 800 class, while Gavin Yogues added a 3rd place podium in the RZR 170 Stock Novice class.

Quad X Series – Round 2 at Glen Helen Raceway
Despite the heat out at Glen Helen Raceway, a handful of racers decided to take advantage of the combo race with the Quad X Series and compete in both. With a total of 40+ motos throughout the day, it was a test of endurance for riders participating in both series. Travis Miranda was perfect in the ATV 450 Intermediate class, giving him three total moto wins and two overall wins on the weekend. Fellow GBC Motorsports racer Craig Bennett grabbed a 4th place overall finish in the ATV 450 Pro class, finishing 4th in both motos. In the ATV 450 Novice class, Gary Bennett won the first moto and placed second in moto 2 to earn 2nd place overall on the day.

Nic Granlund was nearly perfect at Glen Helen, adding to his win total with the Quad X races. Granlund finished 2nd and 1st in the UTV Unlimited motos and claimed a pair of moto wins in the UTV Pro 1000 class, bringing the tally to seven moto wins and four overall victories in one day. Randy and Sierra Romo again joined Granlund on the Pro 1000 podium, but this time it was Randy in the 2nd place position and Sierra in 3rd.

Claudia Romo added a 2nd place finish in the UTV Production 1000 class, a solid outing for the WORCS racer. Casey Sims was outstanding as well, finishing 1st in both motos to take the UTV Open 800 overall victory.

GBC Motorsports racers will now prepare for the next Dirt Series round, set for July 23rd at Sunrise MX in Adelanto, CA. The next round of the 2017 Quad X Series is slated for August 26th at Glen Helen Raceway. Learn more about GBC Motorsports ATV and UTV tires at www.GBCMotorsports.com, and follow us on Facebook, Instagram and Twitter for the latest updates.