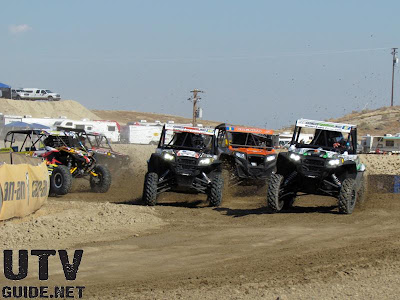 Anaheim, Calif. – May 15, 2013 – GBC Motorsports racers are heating up to go along with rising temperatures in Southern California as RJ Anderson and Mitch Guthrie Jr. won their respective classes at WORCS Honolulu Hills.

SXS Pro ProductionWith temperatures breaking into triple digits, WORCS Racing descended on the small town of Taft, CA for the fifth round of the 2013 season. RJ Anderson took the holeshot and the early lead in the hotly contested SXS Pro class, as fellow GBC racers James Hill and Tommy Scranton followed behind in third and fourth. Anderson seems to be back to form as he controlled the entire race and finished with his second straight victory aboard his GBC Dirt Commanders. Despite running in the top five for most of the race, last-lap mechanical issues dropped both James Hill to 12th place and Scranton to 16th on the day. Tim Wyatt finished 9th and Wesley Barker finished 14th. The SXS Pro win pushed Anderson up into 6th place in the season standings, and despite the disappointing finish James Hill actually jumped up to the number two spot. Tim Wyatt sits in 4th place, Tommy Scranton in 7th and Wesley Barker in 10th to give GBC Motorsports five of the top ten spots on the leader board.

SXS Production 1000Just three weeks after fracturing his hand on a hard landing at Sand Hollow, Mitch Guthrie Jr. returned to action to dominate the SXS 1000 class. Guthrie nabbed the holeshot on his GBC Dirt Commanders and didn’t look back, winning his 4th race of the season and stretching his class lead to 41 points. Mike Gardner put in his best performance of the year, earning a 2nd place podium appearance and jumping to 4th in the standings.

SXS Production 850Nolan Remlinger pulled the SXS 850 holeshot and ran most of the race in 3rd place, but was disqualified for an off-the-track incident.

Quad Open AOn the ATV side of things, Jose Mendoza and Bryce Kitchen competed in the Open A class at Honolulu Hills. Mendoza finished 7th and Kitchen finished 11th, and both are in the top 5 in the standings at 4th and 5th, respectively. Pala Raceway in California is the site for Round 6 of WORCS Racing, set for July 12-14.

Carlson Back in the Saddle and Back on the Podium