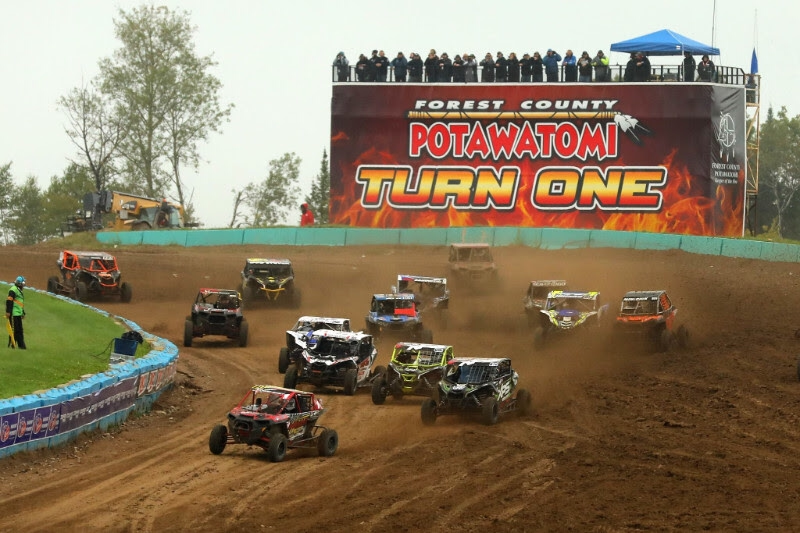 Anaheim, Calif. – September 19, 2017 – Jason Luburgh, of the GBC Motorsports-sponsored team Bikeman Performance/rOtation Motorsports, fought his way to victory at the most recent round of The Off Road Series (TORC) at Crandon International Off-Road Raceway in Wisconsin. The Ohio native’s performance made for a spectacular debut for GBC’s newest addition to their UTV tire lineup: the Kanati Terra Master. Sitting out the Saturday races, Luburgh and mechanic Jimmy Krantz focused their energy on preparing for Sunday competition, a move that paid off in the end. The pair equipped Luburgh’s Polaris RZR with a 30-inch set of GBC’s all-new Kanati Terra Master tires, putting this new model to the ultimate test right out of the gate. Luburgh moved his way into the top five after a crowded start, and by lap five has worked his way into second place.

“We ran 30-in GBC tires today, which I’ve never done before. We used it to gain a little more top end and it worked,” Luburgh explained after the race. “Tires are a huge deal in this game, so if you can really hit your setup well, these are the kinds of results you get.” Luburgh picked his way to the front of the pack by mid-race, thanks in part to the traction and control delivered by his Kanati Terra Master tires.

In addition to taking advantage the large tire size, Luburgh and Krantz were able to utilize the Kanati Terra Master’s asymmetrical, non-directional tread pattern. This innovative tread design allowed them to choose from two mounting options to achieve best traction and control depending on track conditions, a decision that paid off.

On lap seven of twelve, Luburgh emerged from a physical three-car battle to take the lead. From there he held off several hard charging competitors throughout the final laps, taking the UTV Pro Stock victory in the Kanati Terra Master’s racing debut. Jason Luburgh held off all challengers to take the UTV Pro Stock win at Crandon.

“All of us here at GBC Motorsports are extremely proud of Jason and his performance at Crandon,” remarked GBC Motorsports Brand Coordinator, Kory Ellis. “We consult and test with many of our sponsored racers when developing new tires, as these are the men and women who have some of the most intense hands-on experience with our products. To see such positive results in the Terra Master’s debut race is very exciting. We can’t wait to see how this tire continues to help racers and recreational drivers alike in their UTV adventures.”

Luburgh went on to compete in the UTV Pro Modified class, but a mid-race caution led to heating issues in the car that knocked him out of contention. Luburgh’s teammate Treavis Poynter got off to a strong start in Saturday’s Pro Modified race, but a mechanical issue took him out of contention as well. RJ Anderson filled in for the healing Colten Moore. Anderson picked his way from mid pack to an impressive 4th place finish in his Kanati Mongrel-equipped RZR.

The 2017 TORC Series wraps up September 22-24 in a triple header season finale in Elk River, MN. Learn more about the GBC Motorsports Kanati Terra Master and the complete lineup of UTV tires at www.GBCMotorsports.com, and follow them on Facebook, Instagram and Twitter for the latest updates.