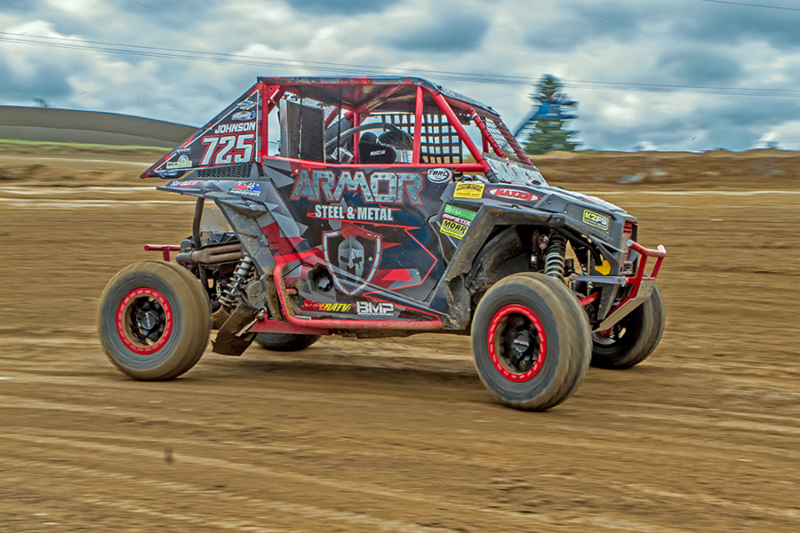 The #725 Armor Steel and Metal backed Polaris UTV headed to Crandon looking continue build on the team’s early season success. Driver Gabe Johnson started the weekend strong and looked even stronger during the second day of competition until a race incident ended the weekend much too soon for the Michigan racer.

The 2017 season is the first year for the Sportsman UTV division. The TORC stop at Crandon would be the first time much of the class has ever spun a tire at the “Big House.” All the UTV classes would race on the ultra-competitive fast paced 3/4-mile long Stadium layout. The race each day would start with a land rush start and then eight laps in front of the largest crowd of the season.

Round 5 saw Gabe and the #725 Armor Steel and Metal backed Polaris quickly in a tight battle for a top five position. The close racing saw Johnson’s race position change more than once during several laps. When the checkered flag was raised, Gabe Johnson crossed the finish in fourth place. Afterwards Paul Johnson, Gabe’s dad and team manager commented, “We are definitely competitive, but our car needs to go on a diet. We built, probably over-built the cage for safety sake, but the added weight compared to some of our competitors puts us at slight disadvantage. With that said, Gabe is really driving well.”

Overnight, Paul Johnson was able to use a lighter, but still within the rules, roll cage from #806 Brad Minerick, a PRO Mod UTV driver that was unable to compete on Sunday.

Sunday’s eight race saw #725 Armor Steel and Metal Polaris quickly running in the top-five once again. When the twelve car field bunched up for the second half restart, Gabe quickly made a great outside move just as everyone headed down the Skybox straightaway. This put the red and black UTV in the second position. Then as Johnson was powering through the Bypass Turn another competitor tried to make an inside pass where there just wasn’t any room. The resulting contact broke the left front spindle on Gabe’s car, ending the day in tenth position.

“The lighter weight roll cage made a difference,” noted Paul Johnson. “It’s too bad another racer took Gabe out of the race. He really had a great run going. We will go back to the shop and see where we can lose some weight on the car without compromising the integrity. Winning the season long championship is a goal of the team and there’s plenty of racing left to make that happen. Bark River is up next and it’s our home track, so we will have plenty fans supporting our team.”

After five rounds of racing in the TORC Series presented by AMSOIL Sportsman UTV Championship, Gabe Johnson is currently in fourth place overall.

As mentioned, the next stop of the TORC Series presented by AMSOIL is July 15-16 at Bark River International Off-Road Raceway in the Upper Peninsula of Michigan.

New Season, New Cars, New Stars for the 2010 of the Lucas Oil Off Road Racing Series