Irvine, Calif. (April 18, 2011) – Funco Monster Energy Kawasaki’s Chad George dominated the field in Surprise, Ariz., piloting his Teryx™ to grab another win Saturday at Round 3 of the Lucas Oil Off-Road Racing Series. During Round 4, on Sunday, George qualified fastest but broke his drive belt during the main event which took him out four laps into the race. The 1.1 mile track at Speedworld Off-Road Park consisted of a good mixture of technical and fast sections. It was set-up with a long whoop section and a unique off-camber turn which added another level of technicality to the already challenging blue-groove track. Muzzy’s Monster Energy Kawasaki’s Robert Van Beekum finished in fourth on Saturday and scored a third-place finish Sunday. Tyler Winbury finished in third place on Saturday, and was able to pilot his Teryx through the checkered flag to take the win Sunday. 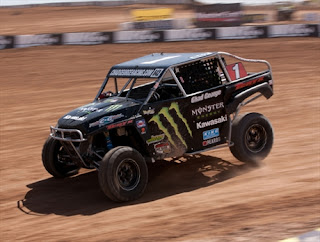 Mashing the Gas
During practice and qualifiers, George ran into some mechanical issues that left him starting in the back row of Saturday’s main event. Even though he got an undesirable start position, he was able to put his Teryx to work, and maneuvered up through the field with relative ease. George continued to mash the gas, pushing past competitors to eventually take the lead before the checkered flag dropped.

“I know my Teryx inside-out,” said George. “Even if I can’t practice, I know my Teryx good enough to adapt once I get out on the track. I got a back row start, but still I charged past everyone early and pulled into second quickly. I really took advantage of a long whoop section that other racers were too timid to sprint through. I just put my foot on it, and charged past the other racers who were slowed down in those whoops. Once I caught up to the leader, we went to battle. We exchanged the lead a couple times, but I finally made the pass stick on the last turn of the last lap to take the win.”

Literally Flying
George noted that the jumps, at Speedworld in particular, seemed to be growing larger every year. However, that detail failed to slow him down as he could frequently be seen launching his Teryx through the air, past the bleachers packed with screaming UTV/off-road enthusiasts.

“That track really has some big jumps, and they make it a lot fun,” said George. “The Teryx really has such an advantage over the other UTVs on the track. It is so much more agile than the other competitor’s UTVs. I can put the Teryx into situations that other UTVs just can’t handle.” 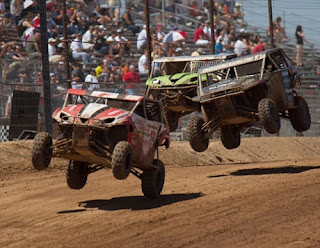 Kawasaki V-Twin Power
Since the beginning of the LOORRS race season, a Kawasaki Teryx UTV has topped every UTV unclassified podium. After four rounds, George has stacked up two wins, Van Beekum grabbed a win, and Tyler Winbury has picked up a win.

Westward Bound
The Funco Monster Energy Kawasaki race team will head west next month to Glen Helen Raceway in San Bernardino, Calif., to compete in Rounds 5 and 6 of the Lucas Oil Off-Road Racing Series. George will be looking to get back on top of the podium and add some cushion to his current position on top of the leaderboard. Muzzy’s Monster Energy Kawasaki’s Van Beekum will also be in the lineup at Glen Helen, looking to pilot his Teryx back into the winner’s circle. 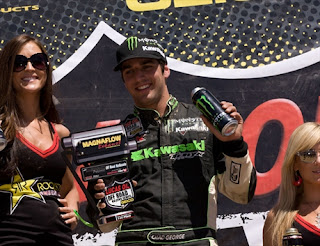 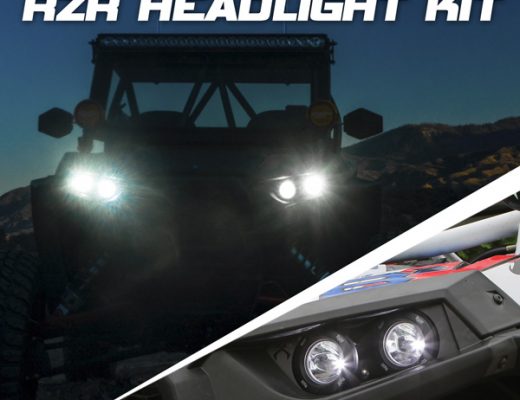