Fun-Filled Weekend Ahead in Vegas Ahead 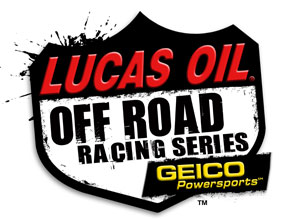 With Rounds 13 and 14 of the Lucas Oil Off Road Racing Series less than a week away, it’s no surprise that the excitement is really building for a weekend of racing in Las Vegas. Las Vegas Motor Speedway will host the races for the third time this season, and with some very heated points battles on the track and some unique events off the track, this is a weekend you won’t want to miss.
Several classes are still enjoying very close points battles with just three rounds of racing left, and the upcoming two rounds of racing should prove to be pivotal in the drivers’ quests to grab the points titles in their respective classes. In Pro Lite Unlimited, a great weekend in Surprise helped Chris Brandt leapfrog Marty Hart for the points lead, and Brandt will take a 17-point lead into this weekend, ahead of Hart, Matt Loiodice, and Brian Deegan, all of whom are within striking distance. Limited Buggy is also close, as John Fitzgerald closed in on points leader Justin Smith by four points in Surprise, narrowing the gap to just ten points overall. Modified Kart is still seeing a heated battle, with frontrunners Mitchell DeJong and Zachary Hunt scoring exactly the same number of points in Surprise, leaving a gap of 38 points for DeJong over Hunt. These points races are close, but those in Unlimited UTV, SuperLite and Pro Buggy Unlimited are even closer.
In Unlimited UTV, four drivers are within less than one win of the points lead, with leader Chad George holding a narrow margin of six points over second-placed Austin Kimbrell. SuperLite continues to evolve into a more and more competitive class, with Chad George leading this class as well, but by only three points over Jeremy “Twitch” Stenberg. CJ Greaves and Jacob Person are just two points apart in third and fourth, and all four drivers are within 23 points of the lead. And then there’s Pro Buggy Unlimited. Larry Job, Doug Fortin, and Cameron Steele all had strong runs in Surprise, and these three now sit just 10 points apart coming into this weekend, with Job sitting on top over Fortin and Steele, who are tied on points (Fortin’s four wins gives him the edge over Steele, who has one). Undoubtedly, this weekend will see the frontrunners charging hard to pick up every valuable point, and chaos is bound to ensue.
Other big news this weekend includes the return of 7-time Supercross Champion Jeremy “Showtime” McGrath to Lucas Oil Off Road competition. McGrath made several appearances earlier this season, and will again bring his Monster Energy Toyota to do battle in the Pro 2 Unlimited ranks. Also on hand this weekend will be young Baydon Yundt of Monkton, Ontario, Canada, who will get to see his wish come true as part of the Make-A-Wish Foundation. Baydon’s wish is to meet Brian Deegan, and Deegan has agreed to give Baydon a ride along on Friday. In addition, Baydon will get to wave the green flag in both of this weekend’s Pro Lite Unlimited races, and he and his family will receive Metal Mulisha gear and special seats in the Lucas Oil VIP area.
Finally, there will again be a big Lucas Oil pre-race party to kick off this weekend’s festivities. This weekend’s host will be Stoney’s North Forty, a country-style bar and dance club in northwest Las Vegas. The fun runs from 6-8pm on Thursday, November 4th, with dancing, live country music, drink specials, a mechanical bull, and of course, some of Lucas Oil Off Road’s biggest names on hand to sign autographs. Todd, Kyle, and Curt LeDuc, Bryce Menzies, Rodrigo Ampudia, Robby Woods, Travis Coyne, and Jerry Daugherty will all be on hand, so don’t forget to come by and meet your favorite drivers. Check out www.stoneysnorthforty.com for all the details.
This weekend should bring all the excitement and drama of late-season racing, and with it all going down with Las Vegas as a backdrop, this is a weekend you’ll want to see for yourself! Gates open to the public at 9am both Saturday and Sunday, with racing getting underway at 10:30am. Get your tickets at the gate, or at www.lucasoiloffroad.com, before this event becomes a sellout.

Best In The Desert 13th Running of TSCO “Vegas to Reno”