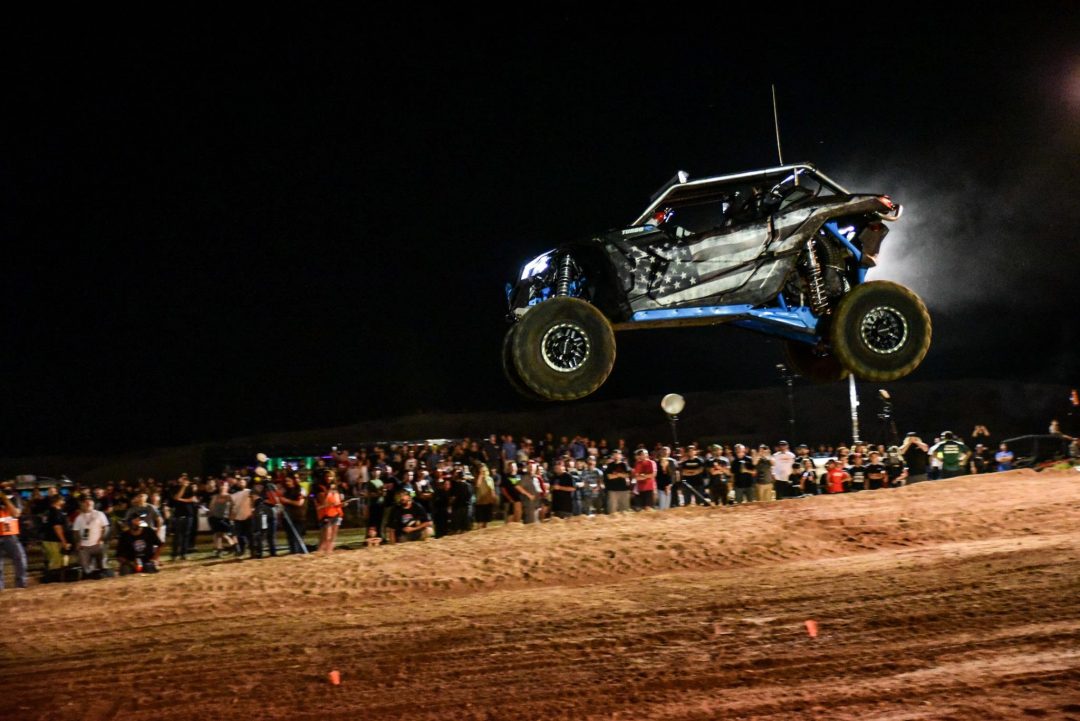 Evolution Powersports (EVP) tuned Can-Am Maverick X3’s dominate BITD races this past weekend in Laughlin NV (UTV World Championships).  Some of the best UTV racers from across the world gathered to compete in this prestigious race. Evolution Powersports works with the top race teams and individuals getting their vehicles to tuned peak performance and the results speak for themselves.

Friday night started with the Laughlin Leap where over 20 drivers and vehicles competed to jump their UTV the farthest.  Cole Freiday jumped his Evolution Powersports tuned Can-Am X3 117.9 ft beating the entire field of competitors.  He beat out full built race cars and paid professional drivers including RJ Anderson to win this event.

The night before the short course race, the EVP / S3 team we worked well into the night getting Dustin’s car ready for the race. The car was never really tested as it only had 6 miles on the clock from being delivered new.  There were some issues that were going to prevent the car from racing. We robbed some parts from another car we had and got the car put together just in time to grab a few hours sleep before the race.  The late night parts swap and tuning paid off and from the Start of the race, Dustin Jones took the whole shot and lead from flag to flag.   His Maverick X3 performance flawlessly and he had the power and skill to outclass all of the other 100 + racers. Saturday afternoon the UTV world championship Pro turbo UTV class Desert race had a field of 69 desert racers from all over the world battling it out in their purpose built UTV racecars. The 9 lap, 3 plus hour race was a true test of man and machine.  Dustin Jones of S3 Powersports with co-driver Dustin Henderson took a solid 3rd place finish in their Evolution Powersports tuned Can Am X3 and only 15 seconds behind 2nd place.

In the Desert Race Unlimited UTV – Brett Comiskey in his LSR built and Evolution Powersports tuned Can Am Maverick took the #1 spot beating out the other 9 competitors in his class.  The next closest racer in his class was more than 40 minutes behind.

Great job to all of the EVP supported drivers / teams who competed in the UTV world Championships this past weekend.