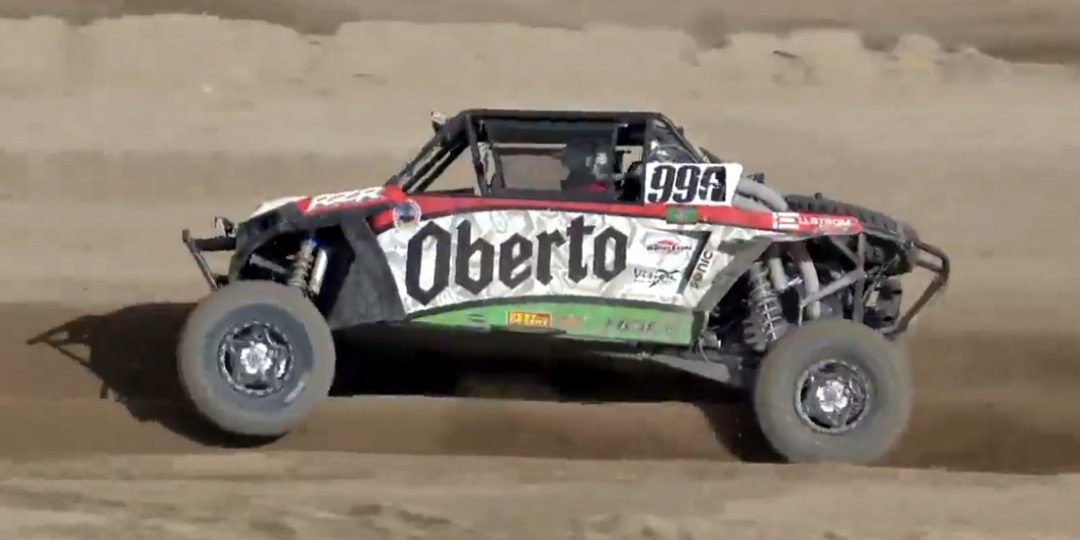 Polaris RZR UTV World Championship worked out well on the 16 mile desert race course outside of Laughlin, Nevada on Saturday.

The plan called for a fairly conservative first half, staying in touch with the race leaders and in position for a hammer down run to the podium over the second half of the 144 mile race. After a brief stop to correct a steering issue on the first lap dropped the team outside the top 10, things went well to the mid-point of the race. Sven Ellstrom and co-driver Chazz Arenibas had moved up to 6th place by the start of the 5th lap in the 9 lap event. Two laps later, they were in podium position in third place but still had a lot of time to make up. Ryan and Mark Holz, running second, were ahead by more five minutes.

A lot of that deficit was made up during the 7th and 8th laps as the Oberto team was just 45 seconds out of second with the end of the 8th lap approaching. That’s when the transmission decided it had had enough. A disappointed Sven Ellstrom pulled off the course with a DNF and hopes for a podium finish reduced to 28th place in the final standings. The 20 year-old driver explained, “Our starting position at the end of the front row actually put us on the outside in the first turn and we came out of it about fifth. Then, a couple of turns later, the power steering went out and we had to stop and restart everything. That gave us a little more catching up to do than we had planned but we were running well and getting by the guys who had passed us.”

The race took a heavy toll on the big field of the country’s best and fastest off-road racers, with only 18 of the 69 starters finishing all nine laps. Phil Blurton of Loomis, California scored an impressive victory with the father and son Holz Racing team from Lynden, Washington second. Dustin Jones of Bossier City, Louisiana rounded out the podium.

Team owner Erick Ellstrom said, “A lot of things went well. We got great performance from our Tensor Tires and Walker Evans suspension and Sven did a great job moving up through the field. It looked like were in great shape ending the 8th lap before the transmission went.”

Ellstrom added, “Congratulations again to Phil Blurton who is becoming the guy to beat out here and our friends Ryan and Mark Holz on a great run. Will go back to Seattle and get out the Sonic Tools to rebuild the Oberto UTV and be ready for the Silver State 300 in Alamo May 5th.”