Chandler, AZ October 22, 2014 — From pro racers to pit moms, women are uniting this weekend for a common goal: Raise money and awareness for a cause near and dear to their hearts… literally! Since 2005, the Mojave Off-Road Racing Enthusiasts (M.O.R.E.) Powder Puff event has been raising money and awareness to combat breast cancer. On Saturday, October 25, a full field of female racers heads to the desert just outside Barstow, CA near the Tanger Outlet Mall to race towards a cure, including DragonFire’s Pro UTV racer Lacrecia Beurrier.

The 2X Mint 400 Sportsman UTV Champ Lacrecia returns to her roots to race in the M.O.R.E. Powder Puff event to support breast cancer awareness, while her new co-driver Carly Lavamaki called “shotgun” by winning the DragonFire “hot seat” raffle held during the Sand Sports Super Show and the Off-Road Expo. “We wanted to pay it forward and give some lucky lady an opportunity to strap into the race car for this worthy cause,” explains Lacrecria. As an added bonus, Carly will get a hot pink harness autographed by Lacrecia as a momento of the ride.

An ER nurse in her day job, Lacrecia is sporting pink trim on her Can-Am Maverick, something she has been doing since her career started at this very race back in the day. “From my first Powder Puff race, beating cancer has been the reason for racing.” She highlighted the cause at the top of the podium in two consecutive Mint 400 wins… and if all goes according to plan, a return to the Powder Puff podium this weekend. “It would really make my year to win this one, but win, lose or draw, everyone benefits from us beating breast cancer!”

M.O.R.E. — Mojave Off-Road Racing Enthusiasts — provides a venue and format for off-road enthusiast to compete against one another in a grueling test of speed, endurance and ingenuity. M.O.R.E. aims to promote desert racing in Southern California and the surrounding areas. Having race classes from stock buggies to high end unlimited vehicles, M.O.R.E. provides a racing outlet for all off-road desert racers. Formed by Jim Clements in 1997, M.O.R.E. partnered with the Jeffers family for the 2014 season. M.O.R.E aims to keep racing affordable, competitive, safe and racer-friendly. Mojave Off-Road Racing Enthusiasts is here to serve the family of off -road desert racers.

This two-time Mint 400 winner races for a reason — she is out to honor the survival, determination and compassion of those fighting breast cancer. The pink ribbon for breast cancer awareness is not something Lacrecia just slapped on the car this October during Breast Cancer Awareness Month. “Racing to support the cure is where it all started for me,” she says. “My first race in my old Rhino was a charity event to raise money for the program.” Lacrecia quickly went from charity events and Powder Puff racing to the real deal, competing in what is billed as America’s toughest off-road race, the Mint 400! Not only did she finish the race, she won the Sportsman UTV class first time out and then came back to successfully defend her title… proudly running the ribbon and pink trim for both her Mint 400 wins. She is a true champion, on and off track — when she is not ripping it up on the race course, Lacrecia’s “real” job is as a registered nurse in Lake Havasu, Arizona. DragonFire, RideNow and Can-Am are honored to have teamed up with Lacrecia’s Rockstar Custom Motorsports effort this season. Seehttp://rockstarcustomz.com for details on Lacrecia Beurrier’s program. 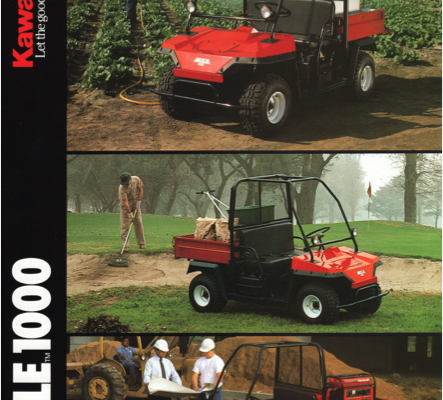 History of the Kawasaki MULE