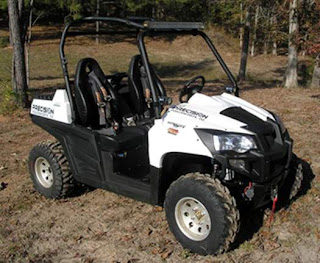 My mechanic and I raced in Durhamtown, GA in the 4 Hour UTV day/night race. We raced as a team, with him driving his stock Teryx (outfitted with MSD, Muzzy and clutch kit with overdrive plate) and me driving the bone stock Discovery SX-800 (with just a front pair of Elka Stage One shocks up front).? According to the rules we were considered modified, our competition was the following Team #1 Can-Am Commander 1000X and a Standard RZR, Team #2 was a pair of turbo charged RZR S’s. The track was a 10 mile loop, we made 10 laps in the four hours for 100 miles of racing.  The winner was the team with most laps in four hours, we all had the same number of laps. We came in third in this group with a overall time that was just 12 minutes total time behind the leader so we were losing just 7 seconds per mile to the leaders. Both our vehicles had the speed and power but lacked the suspension those vehicle did. We never had any trouble keeping up with them when there was smoother trails but this course was really rough and suspension played a huge role in it. The power and clutching seemed to be right on!!  Handling on the flatter parts of the track and around curves were very well controlled, better than my race Rhino 700.  As soon as we get a better suspension under it, it will beat the pants off a RZR and maybe a RZR S for power and handling the rough stuff!!  After I grinded down the welds where the tie rods were hitting the A-arm the steering radius got much better. I can’t find any more things wrong with this vehicle than any other.  The quality of workmanship seemed to be on par with the big name companies and so does the fit and finish.  Does it need improvement?  Sure but so do all of the other brands. The main thing is, the Discovery had zero issues.
Funny thing happened though was I took off for my second round of laps and noticed I was immediately down on power.  It was actually enough for the rough terrain but down nonetheless.  I was trying to figure it out and about mile six or so on the lap, I remembered I pushed my gloves behind the seat and that is where the intake is.  I reached behind me and pulled the gloves from the intake and that baby took off!! Top speed on the SX-800 I have is 75 according to the dash but I have not checked it via GPS yet.
For just a little more money we can widen this vehicle on the A-arms, change the shock angles a bit and then have a lower cost option to a Polaris RZR.  With a little more suspension there would be no reason not be as competitive as other vehicle that was there.  I would also change the tire choice; the Wanda swamplite copies are too big and aggressive for a sport style UTV and hurt performance.
Michael (mechanic) and I have lots of ideas on how to improve the vehicle that will not cost much if any money on manufacturing cost and make it better to compete against the vehicle it was meant to compete against, the Polaris RZR.
Other than my hurting back from getting beat up from the ride I am very proud to be the very first person to ever race a Discovery SX-800 in a cross country race.
The vehicle got lots of on-lookers and lots of questions!

About Hunterworks:
Hunterworks has been in business since April-2003. Hunterworks Inc. designs and resells accessories for Utility Vehicles such as the Rhino, Teryx, and RZR.
Even though Hunterworks is a small business we have become the industry leader in UTV accessories.  We started in this business building accessories for JD gators and doing it all right at home.  Over a period of time we began to grow and not be able to keep up with demand.  We started moving into other UTV’s which kept our growth up. What we do now is find products that meet our quality standards and we bring them to you via the web.  We also design and prototype products, once the prototypes are done we have several companies that build our products for us.  They ship them here and we ship them out to you.  Other companies waited to jump on the UTV accessory bandwagon and are playing catch up, some are really big companies who now buy from us.  We are constantly building business relationships with companies to bring you the best there is to offer.  Don’t underestimate our capability on account of our size, Hunterworks Inc. carries a big stick.
We put the “U” in UTV and we do it because we love this business.

About Precision PowerSports:
The Discovery product line is exclusively owned and distributed by Precision Powersports. Precision Powersports along with it’s subsidiaries makeup “The Precision Companies”. The company was founded in Houston, Texas in 1992 as a manufacturer of innovative metalworking fluids and specialty industrial chemicals. Building upon the companies motto “The Precision Way” they continue to offer the highest quality products and services through five distinct business units.