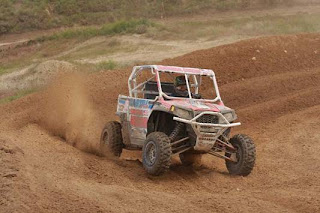 Mesa, AZ December 8, 2011 — Christmas came early for the folks at DragonFire when they wrapped up the #1 plate in both the GNCC series back East and the WORCS championship out West this season. As an added bonus, DragonFire-equipped UTVs stuffed the stockings with a 1-2-3 sweep in the GNCC series final standings!

“With numerous individual event wins across the country this season and the overall UTV Class Championships in both the GNCC series in the East and the WORCS title out West, DragonFire is a proven winner by any measure,” says General Manager, Scott Highland. “Anyone can claim to produce a superior product, but we prefer to let DragonFire’s multiple world championships do the talking for themselves. Whether it is the wide-open desert racing of the WORCS series or the tight, treacherous terrain of the GNCC events, DragonFire is #1… and we have the plates to prove it!”
In addition to being a major sponsor for William Yokley’s National Guard Polaris Coastal DragonFire team, DragonFire’s exclusive exhausts, engine work, safety components, clutching mods and other hop-ups were successfully race proven all season long. In fact, after battling with each other all year long, the GNCC open modified class championship came down to a clean sweep at both the season finale in Indiana and the series points totals for DragonFire as Yokley edged Team Hendershot’s father/son team of Larry and Michael, while Scott Kiger finished third. All three top finishers utilized DragonFire’s Woods Suspension Package.
“Win, place and show… DragonFire racers were definitely on the gas this season,” adds Highland. “You could certainly ‘Feel The Heat!’ on the podium both in the desert and in the woods.” The gift that keeps on giving for 2012 is the fact that DragonFire sells the exact same components used to win both the 2011 GNCC and WORCS championships.
In addition to the Woods Suspension Package, DragonFire’s other championship winning components include RZR XP Dual Exhaust kits, DFR Woods Cams, LowBoy doors, DragonBack seats, LockDown SFI-approved competition harnesses and DragonFire’s new quick-detach steering wheel.
This is just the tip of the iceberg according to Highland. “Wait until you see some of the hot new products we will be rolling out in the spring,” he hints. To “Feel The Heat” for yourself, log onto www.dragonfireracing.com to access a downloadable .pdf of the current catalog, check out the Custom Shop to personalize your own set of DragonSkins personal I.D. plates, or “Like” DFR’s Facebook page at http://www.facebook.com/DragonFireRacing?ref=ts
FEEL THE HEAT!
The name says it all! DragonFire continues to crank up the heat when it comes to the best products in the UTV business. DFR has everything from engine and suspension components to bolt-on accessories! We feel your passion, so when you think of UTV parts and accessories think of the Dragon… and feel the heat!