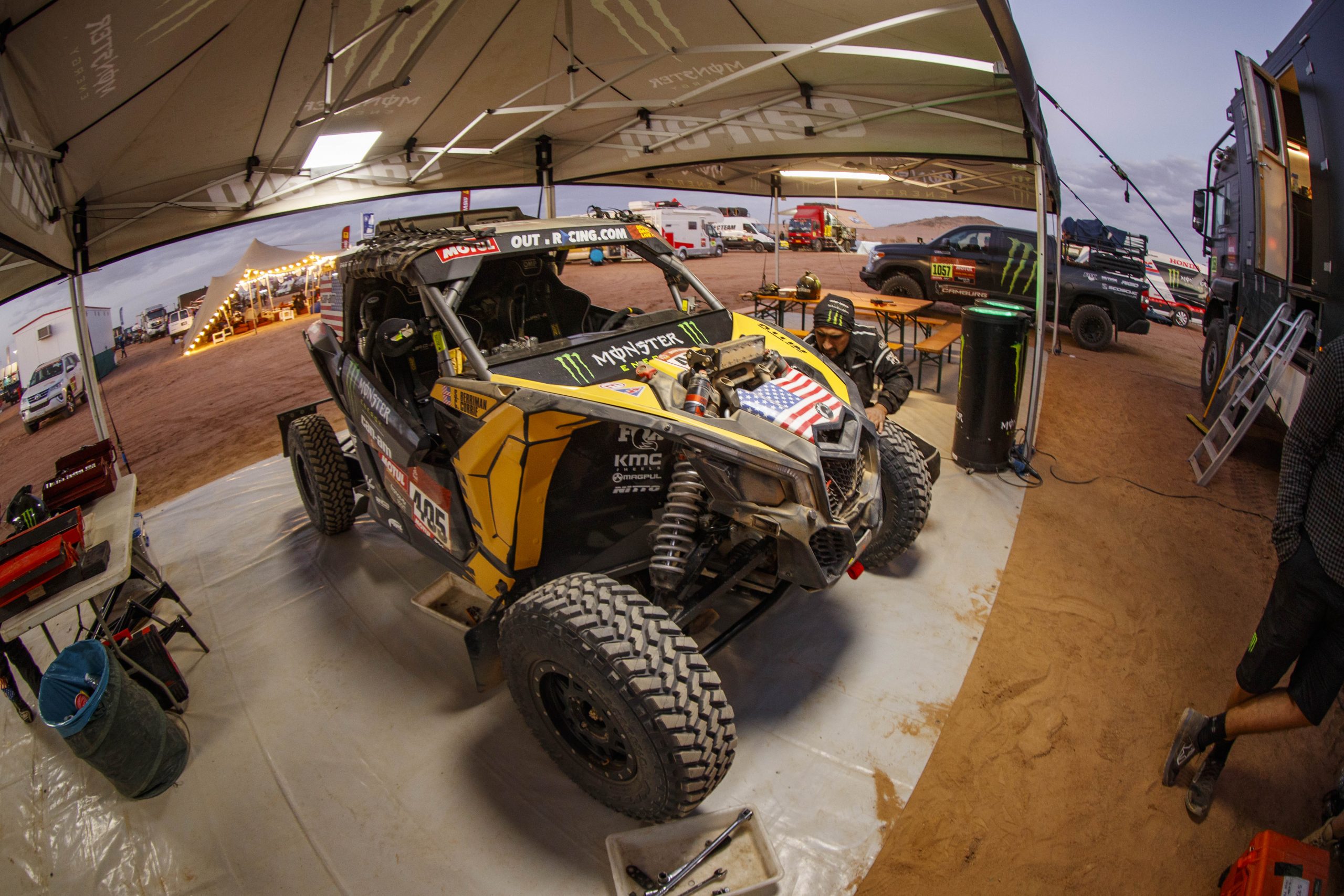 It was a cold morning today as the crews loaded up for the next town. Casey had a windshield added for a little extra comfort on the 80km liaison. They would have assistance vehicles right at the start of the special where they’d remove the windshield and do any last minute checks before starting the stage.

“In the sandy surroundings of the day, humongous rocks will serve as landmarks to avoid costly navigation mistakes! Less technical but just as impressive as dunes, gigantic sandy hills stand to attention in front of the drivers. The descents, occasionally scattered with desert grass, will require even more advanced driving skills.” – Dakar

It was a long stage 5 today but tomorrow is going to be even longer before heading into rest day. 7th for the stage and now 2nd overall only 1 minute 10 seconds down. @monsterenergy x @canamoffroad 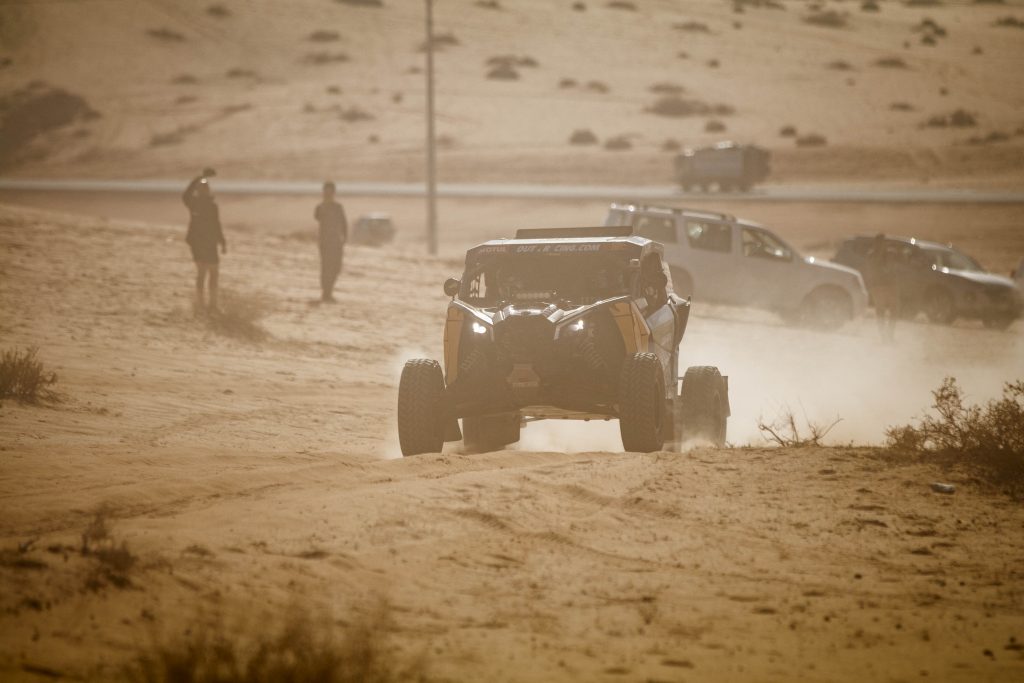 It was another dusty start to the stage as many T4’s were ahead of the SSVs. Casey and Sean were the 7th UTV off the line and were immediately met with a wall of dust. Casey would run a cautious pace on the first half while in the dust knowing that  theroadbooks called for a lot of sand in the second half which Casey excels in. 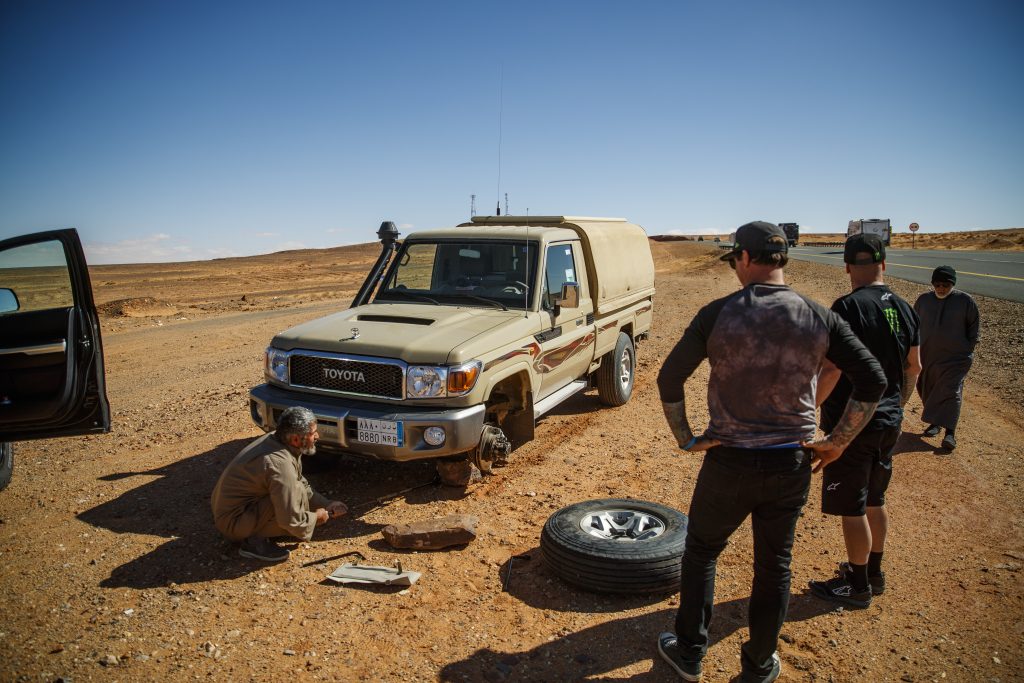 Helping a broken down local

Whilst Casey was out in the dunes, our chase crew was giving a hand to a local. As we were driving down the highway, Aaron Quesada who was sitting co-pilot noticed something bouncing down the road. It was a loose wheel! It came barreling past us and out into the desert on our right side. Then we noticed on the left a Toyota Land Cruiser with a wheel missing sitting on the shoulder. Joe Parsons quickly turned around and drove into the desert to grab the wayward wheel that had finally come to rest. We threw it in the back of the truck, met back up with the sidelined vehicle and got to work helping out the local. We grabbed some rocks to help stabilize the vehicle while we jacked it up. The wheel had all of the lug nuts back off and once the wheel came off the truck dragged on the brake rotor leaving multiple flat spots. Luckily all of the legs were still good. So we there the wheel back on, snagged a couple lug nuts from the other tires, tightened them down and then packed up the tools. By the time we were finished a couple other locals who must’ve been friends had shown up. They thanked us with a couple packs of local Dates and we returned the favor with a handful of Monsters. We grabbed a quick photo and were back on our way to the next bivouac. 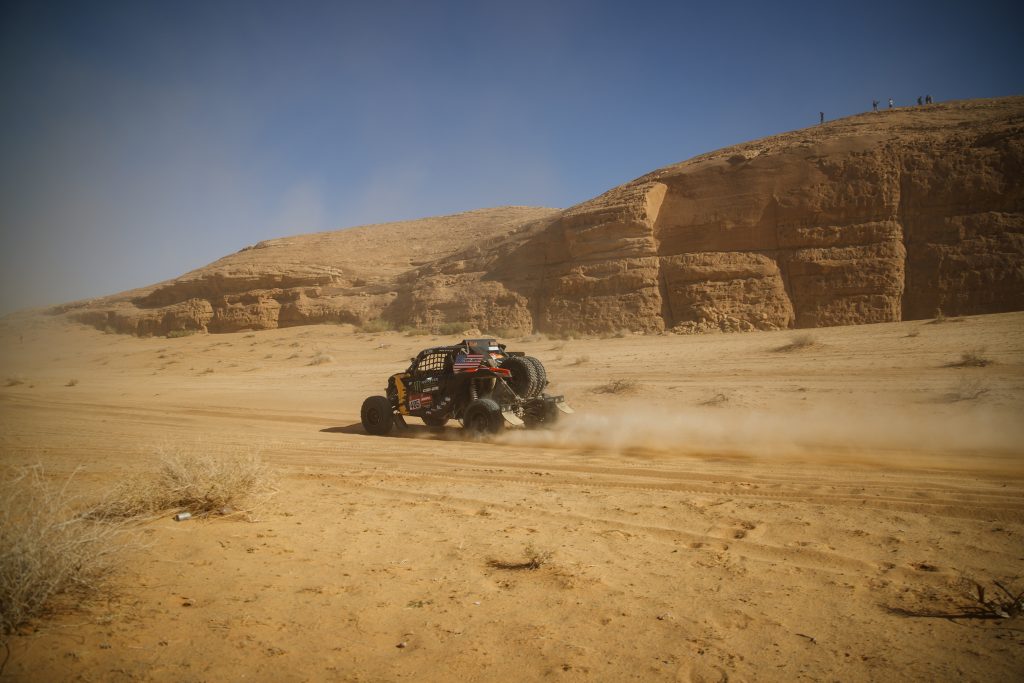 Currie rolling through the desert in his Can-Am Maverick X3

At the halfway point Casey was sitting 10th on corrected time had now moved up into 2nd SSV Overall after Francisco Lopez Contardo and Jose Hinojo Lopez both lost a bunch of time. Casey and Sean would make a strong push in the second half and cut the gap between themselves and Sergei Kariakin to now only be down by 1m 10s going into Stage 6. The top teams have really started to show their colors as the top 4 sit less than 5 minutes apart after 2,872km. 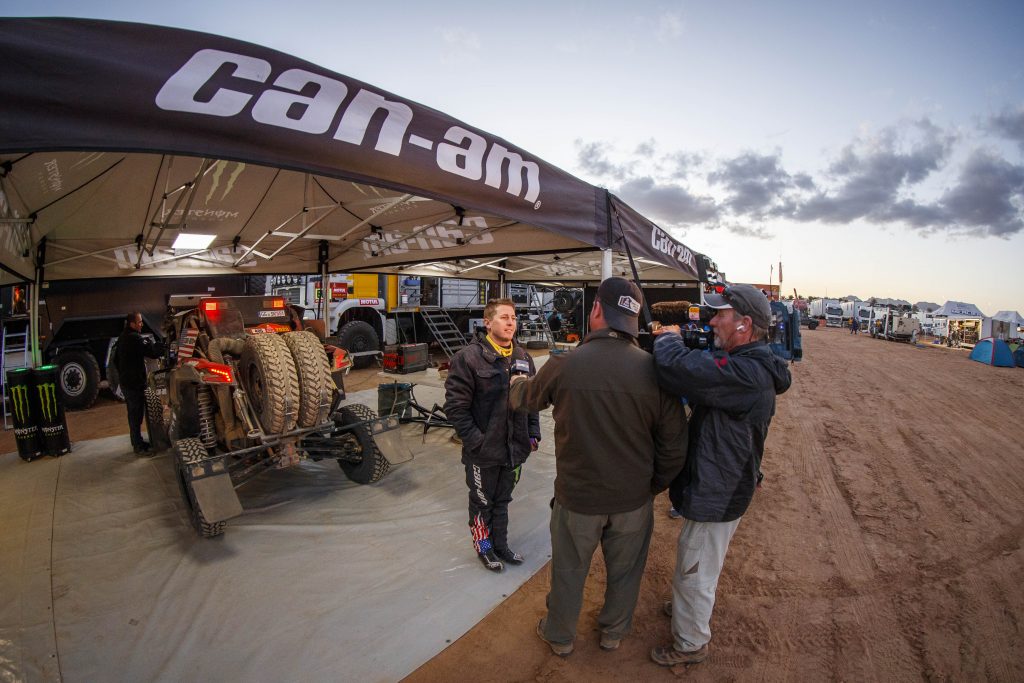 “Stage 5 was a good one, it was sand but not sand dunes. A lotvertical climbs and downhills but we didn’t do any actual dune-ing today. It was good though, the first 150 kilometers was like desert with some rocks. It was just super dusty. We tried to get through it the best could, but the dust was just ridiculous. We got to the refueling and from there I knew it was going to be sand. We just pushed and then got caught by the PH Sport team and we just followed them for 200 kilometers. He was running a fantastic pace and we stuck with them and had a great day. No problems and Sean’s doing a great job. This Can-Am Maverick X3 is ripping!” -Casey Currie

2nd overall 1 minute out of first heading into day 6. Day 5 we ended up 7th but gained time back on the overall. The sand tracks were fast and guys were pushing. #dakar2020

While on the way into the bivouac we spotted a McDonalds and decided to surprise Casey and Sean with a post stage snack. Earlier in the Rally we spotted a couple bike guys doing the same thing on their liaison after the special. There’s something about a familiar food that makes it taste that much better when away from home.

Stage 6 will all be all sand and will be longest the stage yet as we go into Rest Day in Riyadh. 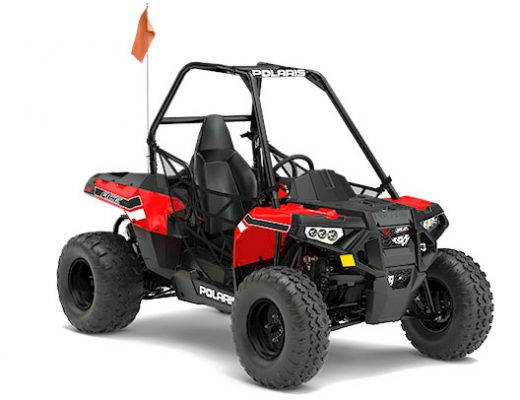