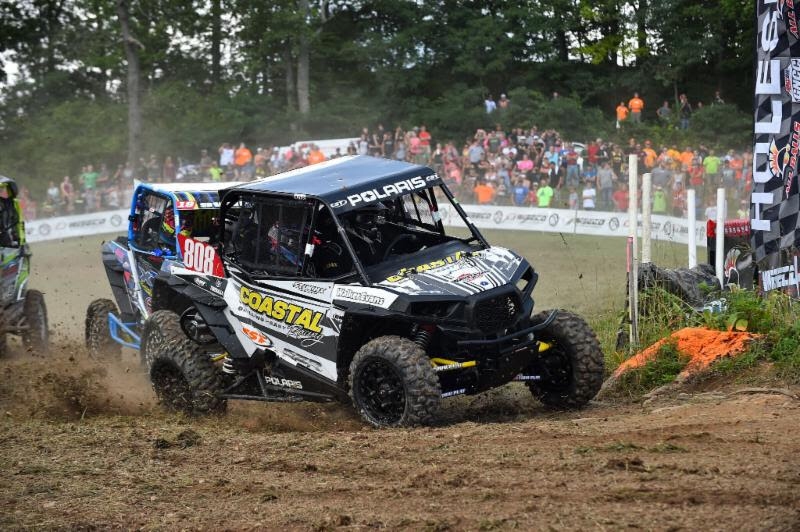 MILLFIELD, Ohio (July 11, 2017) – Coastal Racing/Answer/Maxxis/Waynesburg Yamaha ATV Team rider Drew Landers returned to the center of the podium on Saturday with an impressive College A (16-21) victory at the John Penton GNCC, Round 9 of the Grand National Cross Country (GNCC) Series. Additionally, team rider Brycen Neal secured a 4th overall finish in the XC1 Pro ATV class, while the duo of Sean Bogdan and Jade Kiger came away with a season-best 4th overall in the XC1 Pro UTV class.

After nine rounds of racing, the GNCC Series will now take a break over the summer months as they resume with racing in early September. Consequently, the John Penton GNCC serves as a milestone for riders to end the first block of the season on a good note and the Coastal Racing team was able to gain successful momentum heading into the break.

XC1 Pro UTV
Round 3 of the six-race UTV Championship took place on Saturday and team driver Sean Bogdan drove his Coastal Racing Polaris machine to a season-best finish alongside his co-pilot Jade Kiger. The duo began on row two in the XC1 Pro class and they maximized their positioning by taking the holeshot and the early lead from their row. With the adjusted time, Bogdan and Kiger came through in 5th place on the opening lap so they continued to charge ahead.

“It was a good day of racing for us,” said Bogdan. “We grabbed the holeshot on the second row and never looked back! On lap three I had a driver error and came into a turn a little too hot and put it on her side. Luckily the whole Coastal Racing crew was standing there and got us back on all fours so we could keep pushing along. We lost a few seconds there and the next thing I knew, Walker Fowler was on my bumper. We battled the last two laps back and forth, bumper-to-bumper with some sketchy passing but I was able to grab the 4th place overall finish.”

By the halfway point, Bogdan had positioned himself in 2nd place as they battled only one second away from the lead position. However, on lap three Bogdan experienced a tip-over that slowed down their momentum. Once the duo returned to four wheels they were able to finish strong to still salvage 4th overall for the day, only 3.5 seconds away from securing their first podium finish of the season.

With the season-best finish of 4th place, Bogdan and Kiger now sit 5th overall in the XC1 Pro UTV Championship, only five points away from the 3rd place spot.

New Turbo Kit for the Polaris RZR from Bikeman Performance