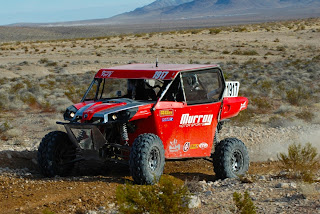 Valcourt, Québec, December 7, 2011 – Can-Am off-road racing teams posted class victories in two different desert racing events. Derek Murray piloted the Murray Motorsports’ Can-Am Commander 1000 to victory at the Henderson 250 in the Best in the Desert series in Nevada. The four-man team of Carl Vella, Mike Penland, Rick Matteson and Ryan Robey teamed to ride a Can-Am Outlander 800R ATV to a class win at the 44th Annual 2011 SCORE Baja 1000 desert race in Ensenada, Mexico.
At the BITD event in Henderson, Nev., Derek Murray drove and Bill Kugel co-piloted the Can-Am due to Jason Murray, the driver of record, being ill. Even without his brother by his side, Derek Murray was determined to win. The Commander 1000, prepped by Desert Toyz, started in seventh place, but slowly worked its way to the front of the side-by-side vehicle pack. Three miles into the third lap, the team took over the lead and drove a clean, fast race from there to the finish line to record its first overall win of 2011. The Murray Commander team ended the BITD season ranked third in the final Pro UTV class standings.

“We are extremely happy to have won the Henderson 250 as it is the final race of the season and determines the outcome for the season due to it being a double points race,” said Derek Murray. “We knew all season the Commander had what it takes to be a top competitor in the most competitive desert racing series in the USA. We’re excited that what we knew finally came to fruition in Henderson. It shows that the Commander is a great, reliable and fast machine that’s able to be modified to any rider’s needs.”
In Baja, the Vella / Penland team was the only ATV in the Limited Utility (Class 26) ranks to finish the race. The team, riding a modified 2011 Outlander 800R X xc finished the Baja 1000 course in 26:26:44 and averaged more than 26 mph. Their victory, combined with an earlier win at the Baja 500, also secured the SCORE Series Class 26 championship.
“The Can-Am Outlander made our victory easy,” said Penland. “This makes six Baja 1000 wins that I’ve been involved in and this one means just as much to me. We just rode smart, raced hard but conservatively and stuck to our race plan. Rick and Ryan rode for the San Felipe section, which was a solid 200-mile stretch of challenging, deep whoops, and did a great job. This was a complete team effort and we were happy with the results.”
Bombardier Recreational Products Inc. (BRP), a privately-held company, is a world leader in the design, development, manufacturing, distribution and marketing of motorised recreational vehicles. Its portfolio of brands and products includes: Ski-Doo and Lynx snowmobiles, Sea?Doo watercraft and sport boats, Evinrude and Johnsonoutboard engines, Can-Am all?terrain and side-by-side vehicles and roadsters, as well as Rotax engines. BRP products are distributed in more than 100 countries.

ITP HAD A BLAST AT BRIMSTONE