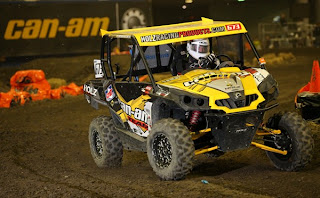 Pelchat Wins ATV Title on DS 450; Holz Wins Inaugural Side-by-Side Title in Commander 1000 X
Valcourt, Québec, October 5, 2011 – In front of 45,000 fans, Can-Am X-Team Pro ATV racer Richard Pelchat topped an all-Can-Am DS 450 podium in winning the ATV portion of the Montreal Supermotocross event held at Olympic Stadium in Quebec, Canada. Fellow Can-Am racer Mark Holz also recorded a class victory, piloting the No. 673 Holz Racing / Motoworks / Can-Am Commander 1000 X to an historic win in the inaugural Side-By-Side class event. Can-Am ATV racers Cody Miller, reigning 2010 NEATV-MX Champion, and John Natalie, 2011 AMA ATV MX Champion, joined Pelchat on the podium.
“It was another great year for Can-Am at the Montreal Supermotocross. To have a Can-Am DS450 podium sweep, and actually the top 4 finishing spots, was outstanding. I’m proud of Pelchat and happy for him to get his first Montreal win and to accomplish it on a DS 450,” said Jimmie O’Dell, Race Manager, Can-Am. “Holz knew he had his work cut out for him, but he did it and came out on top. To have the Motoworks / Can-Am Commander 1000 X take a very convincing win in the inaugural SSV event was icing on the cake, especially against a full gate of competitive side-by-sides. It was mission accomplished for Can-Am in Montreal and a great result for all BRP employees.”
ATV
For the second straight year, Can-Am DS 450 ATV racers swept the podium in Montreal. Pelchat took control of the main event by powering his RP Evolution / Can-Am to the holeshot and early lead. Natalie was right on his bumper pressing him and waiting for an opportunity to pass. Unfortunately for Natalie, he bumped tires with Pelchat and then was then hit from behind by another rider. Natalie was then tangled in a mess of ATVs as he and three other top contenders were thrown from their ATVs. Pelchat, on the other hand, emerged from the pack unscathed and jumped out to a commanding lead.
With the leader in front, Miller, BCS Performance / Can-Am, was in 11th and Motoworks / Can-Am pilot Natalie was in 12th after the first lap. Motoworks / Can-Am DS 450 racer Josh Creamer was in last back in 17th. However, by the midway point, Natalie had moved into third place. Miller was in fifth and Creamer had passed eight racers to move into ninth place. From there, lapped traffic slowed the charge of Natalie, Miller and Creamer and even hampered Pelchat as he saw his lead shrink to around eight seconds.
With a few laps remaining in the race, Miller used a text-book block pass to get by Natalie and move into second place. Creamer, who posted the races’ fastest lap times on the final few laps, had passed 13 riders to move into fourth place. Pelchat’s lead proved to be too large and he was thrilled to earn his first career Montreal Supermotocross title.
“It was good to take the win in my home country. I have had bad luck in previous years, but my bike was awesome and it ran so well,” said Pelchat.

Holz traveled from his home state of Washington with the goal of winning the inaugural Side-By-Side Montreal Supermotocross title. During practice and qualifying Holz was competitive, but not dominant, as he attempted to find the perfect race set-up for his Commander and the tight Montreal course. However, Holz, who has side-by-side racing experience in the WORCS series, had his Commander 1000 X dialed in for the main event as he dominated the field of 18 other racers to win the inaugural Side-By-Side class title. After grabbing the holeshot in his Holz Racing-modified Commander 1000 X, he led every lap and ended up winning by almost 20 seconds over the second-place finisher.
“Our Commander was set up for the desert, so we changed thing up a bit for Montreal,” said Holz. “We were OK in practice and qualifying, but I wasn’t as concerned with our time there as I was figuring out how to pass someone on the narrow track. It was a fun time regardless and good event overall. It was really cool to win in front of all the BRP employees, who had their own section. They seemed very happy with the side-by-side racing results.”
Only two Can-Am Commander vehicles competed in field that was dominated by a competitive brand of side-by-side. However, those two Can-Am Commander vehicles posted the top two qualifying times earlier in the day and were running in first and second for the first six laps of the main event. Former Canadian motorcycle motocross star Simon Homans was driving hard in second place in the main event behind Holz before a mechanical issue ended his day.

Bombardier Recreational Products Inc. (BRP), a privately-held company, is a world leader in the design, development, manufacturing, distribution and marketing of motorised recreational vehicles. Its portfolio of brands and products includes: Ski-Doo and Lynx snowmobiles, Sea?Doo watercraft and sport boats, Evinrude and Johnsonoutboard engines, Can-Am all?terrain and side-by-side vehicles and roadsters, as well as Rotax engines. BRP products are distributed in more than 100 countries.
http://www.brp.com/

Sea-Doo, Ski-Doo, Lynx, Evinrude, Johnson, Can-Am, Rotax and the BRP logo are trademarks of Bombardier Recreational Products Inc. or its affiliates. All other trademarks are the property of their respective owners.
Follow us at:

Turner Racing Returns to the Desert at the BITD Parker 250 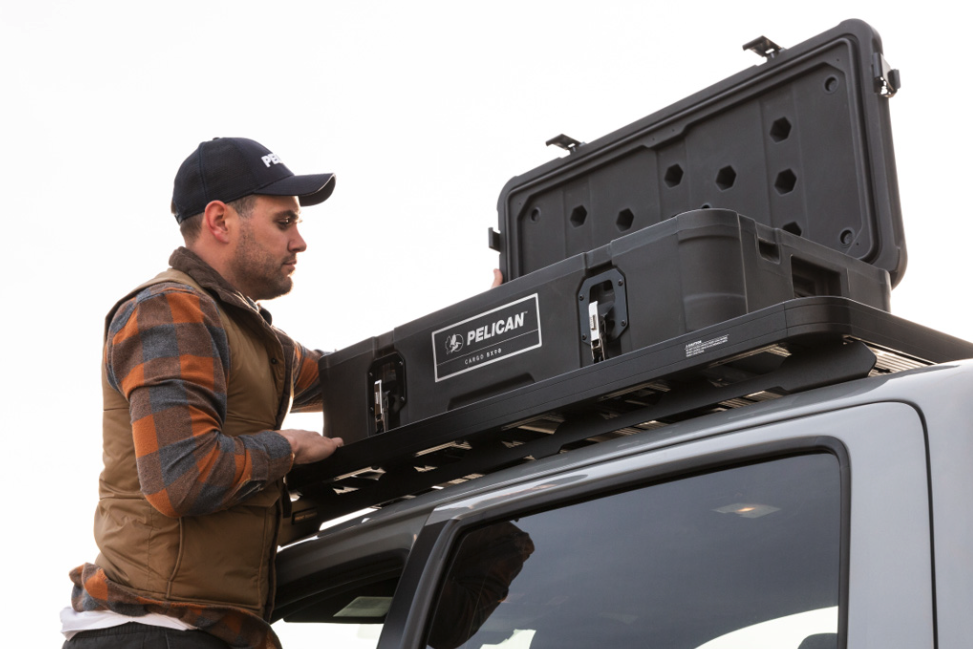 @canamoffroadbrasil has us wondering how much flig

#FrontEndFriday with our @canamoffroad Defender. T

#ThrowbackThursday to 10 years ago when we made th