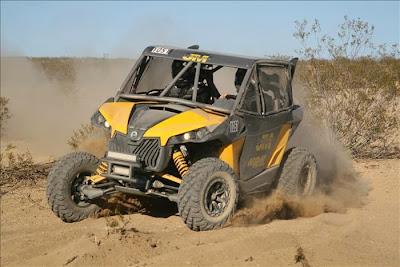 “I was pleased to learn that Can-Am Maverick racers won two growing race series this past weekend. We had the top four finishers at the WEXCR event, which clearly proves the Can-Am Maverick side-by-side is becoming the vehicle to own for cross-country racing” said Jeff Leclerc, Racing Project Leader, Can-Am. “To hear Jim McKay won the PURE 250 overall his first time competing with his Maverick 1000R is great because it proves BRP offers a true high-performance side-by-side purpose built for racing, no matter the environment.”

Round 11 of the WEXCR series in Ohio, also served as round five of the UTV series. Can-Am had several side-by-side racers competing in the one-hour, UTV 1 Open class Sunday, Sept. 29. Maverick 1000R pilot Treavis Poynter and co-pilot Lindsay Hendershot of Team Crash Addict / Performance East / Can-Am took the win. Poynter was in third place after the first three laps, but grabbed the lead after the racer leader, JB Off-Road / Can-Am Maverick 1000R pilot Kyle Chaney, dropped out. Thanks in part to a sub eight-minute lap time on lap four, Poynter extended his lead all the way to finish for his first win of 2013.

Team Hendershot / Can-Am held the lead after lap one, but dropped back to second place on lap two. They were the only team to break the nine-minute mark on the final lap and ended up second, just seven seconds behind Poynter. Team Tigercat (Maverick 1000R) edged Austin Seelig’s Team 1-Fourty-4 (Commander™ 1000) for third overall in the class.

The DWT PURE Deep Into The Night 250, presented by SxSPerformance.com, was held Sept. 27-29 in California. Racer Jim McKay, who was competing for the first time behind the wheel of the Maverick he bought himself for Christmas, won the PURE 250 Production 1000 Sportsman class and took home the SxS overall in California City. McKay completed all six laps in a time of 6:04:33. He was in fourth place after lap one. However, McKay took over the race lead on lap four and stayed on the gas to win his class and beat 15 other racers from four total classes to the finish line.

“Our Maverick is completely stock aside from the safety components needed for the race,” said McKay. “From day one, I’ve been extremely pleased with the durability and performance of the Maverick. As we found out on Saturday, there isn’t much needed to compete with all the extremely modified SxSs that we were up against.”