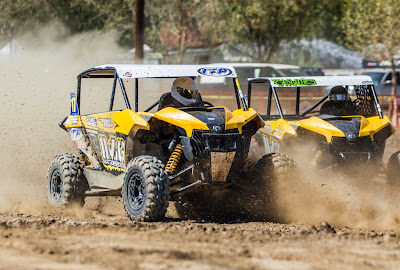 The final round of the Dirt Series was held at Milestone Ranch MX Park in Riverside, Calif. Heading into the final round, Can-Am Maverick racer John Pacheco trailed fellow Team IMG / Can-Am Maverick teammate James Hill by only a six points. Although neither racer won the finale, Pacheco ended the year with a strong second-place finish to edge Hill for the SxS Pro Production 1000 class championship.

“My Can-Am Maverick rips. Thanks to IMG Motorsports for getting my Can-Am prepped and prepared for battle time after time,” said Pacheco. “And thanks to my business partner James Hill for helping me stay focused throughout the season of Dirt and WORCS.”

Pacheco, who won round three, garnered 22 value points in his chase for the title and first ever Dirt Series championship for the Can-Am Maverick 1000R side-by-side vehicle. Hill finished moto one, but had a mechanical issue in the second moto and thus lost valuable points toward the title. However, his second-place overall finish on the season gave Team IMG / Can-Am the top two spots in the Pro Production 1000 class. Both racers will compete at the World Off-Road Championship Series finale this weekend in Primm, Nev.

The ATV Pro Challenge in Memory of Caleb Moore and round 10 of the TQRA series was held the first weekend in October at Underground MX Park in Kemp, Texas. The racing weekend, which was full of entertainment and a $30,000 Pro class purse, included classes for sport and 4×4 ATVs as well as side-by-side vehicles. Can-Am racers won three classes and recorded nine total podium finishes during the weekend. Cody Miller, who took eighth in the ATV Pro Challenge, captured both the 2103 TQRA Pro and Pro-Am class championships on his Louis Powersports-backed DS 450™ ATV. Miller won the Pro-Am class at the finale and was third in the Open Expert class. Hunter Miller was third in the Pro-Am class. DS 450 racer Jeff Reeves (Over 30 A) and Renegade® 4×4 pilot Chris Robinson (Utility Pro) also posted class victories.

Led by Kyle Chaney’s (JB Off-Road / Can-Am) overall victory and QR1 class win, Can-Am Maverick 1000R side-by-side vehicles finished 1-2 at round eight of the UTV Rally Raid Northern Series held at Windrock OHV Park in Oliver Springs, Tenn. In order to improve the racing conditions for the entrants, promoter Quantum Racing spread water on the dusty course, broke up the side by sides into 13 total rows and started each row 30 seconds apart.

Chaney was the lone side-by-side vehicle to complete 17 laps, which was a new UTVRR record, during the four-hour timed event. His time of 3:59.08 and overall victory was aided by his 12:47.52 time on lap eight, which was the fastest of the weekend.

Devon Steedley drove his No. 66 Can-Am Maverick to second overall and second in the QR1 class, by completing 16 laps in 3:54.56, beating third place by more than 3 minutes. Team AC Racing / Can-Am finished eighth in QR1 and 11th overall, completing 14 laps. Round nine of the UTVRR Northern Series is scheduled for Saturday, Nov. 9.