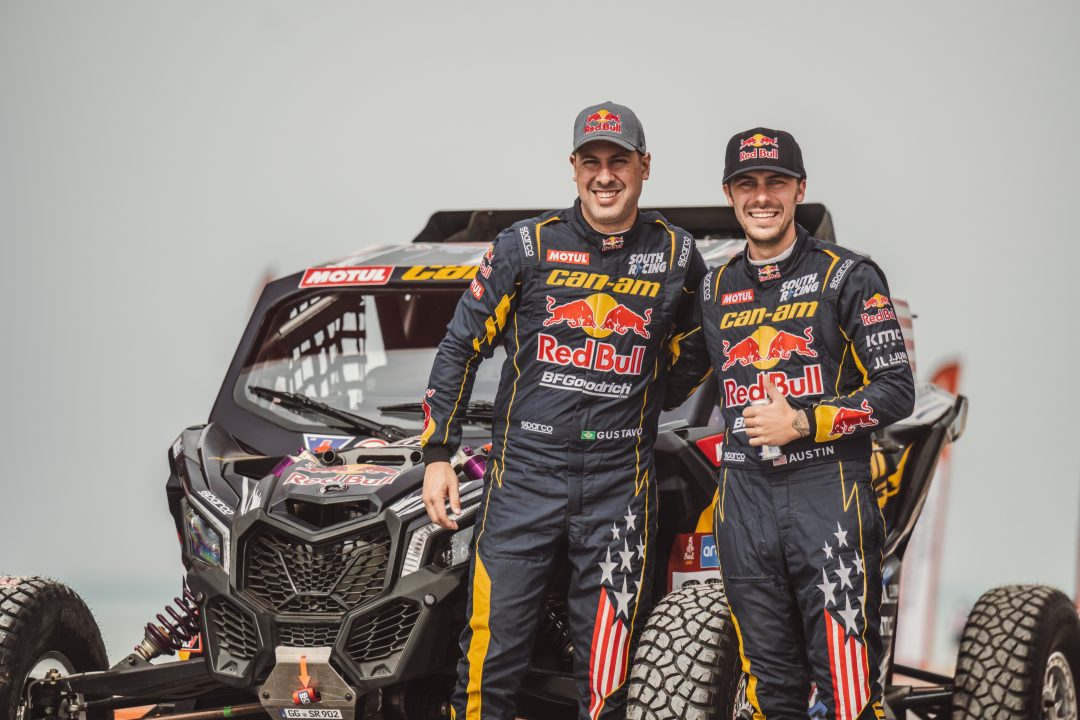 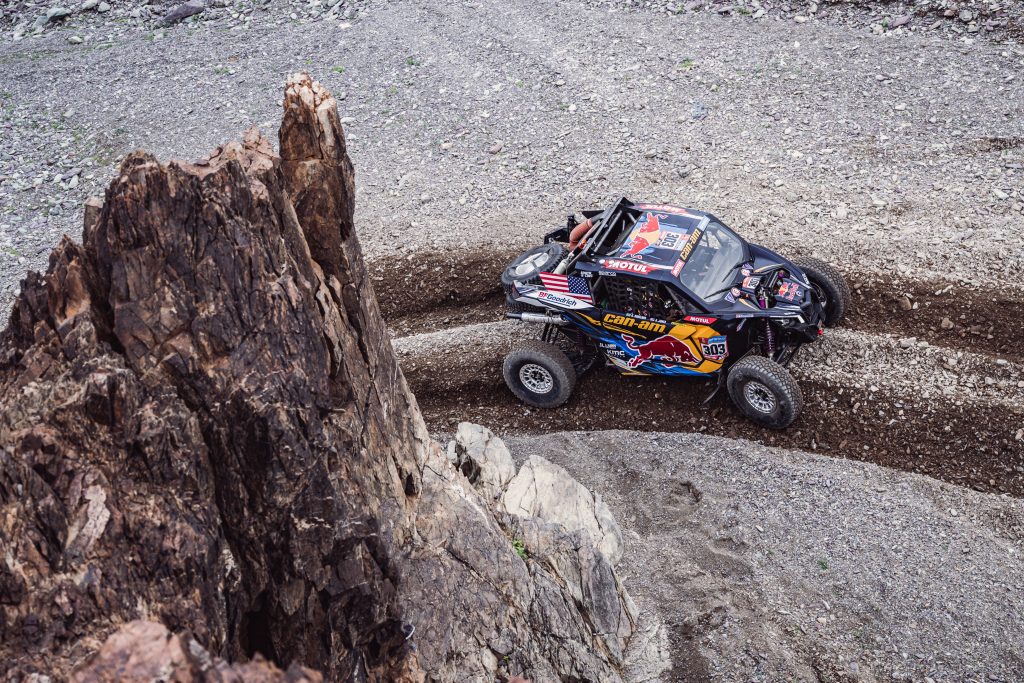 “Seeing our teams go out and already break boundaries, set new records, and reach new levels of success is truly inspiring for all of us,” said Anne-Marie LaBerge, Chief Marketing Officer at BRP. “We congratulate the teams and are eager to celebrate many more important milestones with them.” The team performed exceptionally, taking home 25 out of the 26 cars. This Dakar was particularly challenging, and the fact that we achieved success in both T3 and T4 categories is a testament to our strength. We are grateful to all who contributed to our success and are now looking forward to a much-needed rest,” said Scott Abraham, Team Principal of South Racing and Red Bull Can-Am Factory Team.

As the racing got underway in the T3 class, it was Francisco “Chaleco” Lopez who would jump to the early overall lead after the first two stages, but would relinquish the lead to Seth Quintero after brutal weather conditions struck on the third stage. Quintero then suffered his own technical issues during the fourth stage and would relinquish the lead, but luckily Austin Jones’ win on stage three and other consistent finishes were adding up to keep him in the battle for the overall win. Jones grabbed the overall lead after stage 11 and never looked back, driving a smart and consistent race all the way to the finish. Jones and his co-pilot, Gustavo Gugelmini finished the 8,500 km race in 51:55.53 followed by Quintero in second, Cristina Gutierrez in fourth, and Chaleco in fifth. Every member of the Red Bull Can-Am Factory Team in the T3 class secured at least one stage win, for a total of 6
stage wins and 13 podium finishes throughout the race. “The last leg was really hard. There was a ton of mud, and I was really anxious, but we managed to make it to the end. This has been the most difficult Dakar I’ve ever raced. We’ve had our share of highs and lows, but we kept going and here we are back-to-back champions! We’re ecstatic, a big shout-out to the whole team and my navigator Gustavo who did an incredible job. It was an awesome journey around Saudi Arabia. I’m not thinking about next year yet, but I’ll be back!” said Austin Jones, Red Bull Can-Am Factory Team Racer and youngest back-to-back two-time Dakar winner. 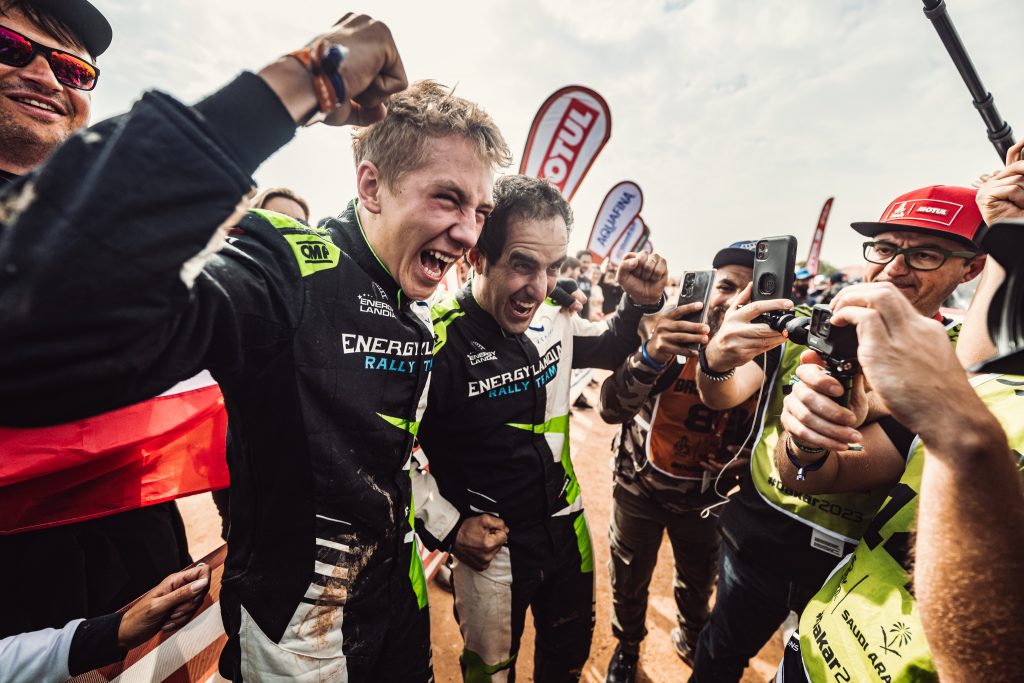 The T4 category was action-packed from start to finish. A battle between Rokas Baciuška of the Red Bull Can-Am Factory Team and rookie Eryk Goczal of the South Racing Can-Am Squad, would keep the race exciting all the way to the checkered flag. Goczal would come out strong, with wins on stages one and four, but Baciuška would respond quickly with wins on stages five and seven that would give him the overall lead. The race remained tight between the two all the way to the final stage, with two racers trading wins throughout. Baciuška would maintain the overall lead until the last stage, where he encountered some issues, Goczal would go on to take the overall win, making him the youngest Dakar Rally winner in history. The rookie and his co-pilot, Oriol Mena, finished the race with an overall time of 53:10.14, followed by Baciuška in second, and Marek Goczal in third for a Can-Am podium sweep. “This is my first Dakar. It’s one of my dreams to be here, I couldn’t be more thankful for my family and team, they made this all possible. We took a big risk to go for the overall lead a few days ago, I gave it everything I had and it paid off,” said Eryk Goczal, Energylandia South Racing Can-Am Racer and rookie Dakar winner.

About BRP
We are a global leader in the world of powersports products, propulsion systems and boats built on 80 years of ingenuity and intensive consumer focus. Our portfolio of industry-leading and distinctive products includes Ski-Doo and Lynx snowmobiles, Sea-Doo watercraft and pontoons, Can-Am on and off-road vehicles, Alumacraft and Quintrex boats, Manitou pontoons and Rotax marine propulsion systems as well as Rotax engines for karts and recreational aircraft. We complete our lines of products with a dedicated parts, accessories and apparel portfolio to fully enhance the riding experience. With annual sales of CA$7.6 billion from over 120 countries, our global workforce includes close to 20,000 driven, resourceful people.

www.brp.com
@BRPNews
Ski-Doo, Lynx, Sea-Doo, Can-Am, Rotax, Alumacraft, Manitou, Quintrex, and the BRP logo are trademarks of Bombardier Recreational Products Inc. or its affiliates. All other trademarks are the property of their respective owners.