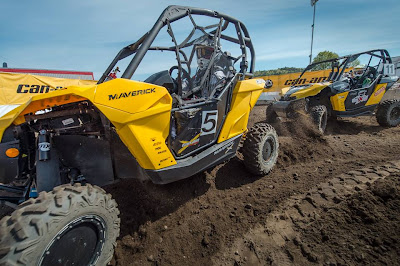 “This was the best weekend ever for Can-Am at the 12 Hours of La Tuque, with victories in the General, Amateur, Ironman and Side-By-Side classes. Many BRP departments were involved in this effort and it paid off with four overall wins, a three-peat for the DS 450 ATV in the General class and a successful debut for the Maverick 1000R,” said Jimmie O’Dell, Race Manager, Can-Am. “Our Can-Am ATV racers competing in the GNCC series once again excelled in the morning session, winning four class overalls. Kevin Trantham’s third-place finish on the overall morning podium was another one of his great accomplishments.”

Known as the biggest off-road event in Canada, the 12 Hours of La Tuque is an off-road endurance event for ATV and side-by-side vehicles. Can-Am racing posted its most successful weekend in history, winning a total of four classes, the prestigious General ATV session and tallying seven of the top 15 places in the ATV portion of the 2013 event.

In near perfect weather Saturday, May 18, the Can-Am X-team / Elka squad of Deroy, Vachon and Bobby Desjardins finished second in the morning qualifier, which aided them during the Lemans-style start. After a good start, the team stayed consistent throughout the 12-hour event, which was made up of three four-hour sessions. The Can-Am X-Team won all three sessions to earn the overall and extend the DS 450 ATV’s General class winning streak to three years in a row.

The SxS class didn’t compete for all 12 hours like the ATVs, but faced two one-hour sessions over two separate days. Yani Desjardins, who consistently posted the fastest lap times, piloted his Maverick 1000R to the overall win, a first for the new Can-Am side-by-side vehicle. Martin Horik, who finished third in his Maverick 1000R, joined him on the podium.

Can-Am 4×4 racers once again earned numerous podiums and four class wins in near perfect conditions at round six of the GNCC series in Springville, Ind. Trantham, the reigning 4×4 Lites class champion, won the 4×4 lites class aboard his 2013 Outlander 500 for the fifth straight time and earned third on the morning overall podium at the second-annual Limestone 100. He won by almost six minutes over Can-Am rider Andrew Langston. Can-Am pilot Scott Day was third in the class.

Defending 4×4 Open class champion Bryan Buckhannon won round six to keep remain perfect in 2013. Buckhannon has won 16 of the last 20 4×4 Open class races. He was joined on the podium by Can-Am Outlander 800 pilots Sam Williams and Tanner Bowles.

“My Can-Am Outlander was 100 percent perfect,” said Buckhannon. “It was fun to kind of have an old-school race with Michael Swift. We went back and forth … it was honestly the most fun I’ve had racing this year.”