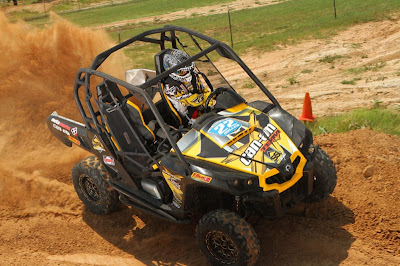 “Josh Creamer, who won both the Pro and Pro-Am classes on his DS 450 in New Hampshire, dominated in the NEATV-MX series once again. He continues to impress during his pursuit of a double championship in 2012,” stated Jimmie O’Dell, Race Manager, Can-Am. “The Miller brothers were unbelievable in Texas, competing and winning in two different series. Hunter, who also won the TQRA SxS title for Can-Am, had a exceptionally strong weekend in both the Commander 1000 X and on board the DS 450 ATV.”

MX101 in Epping, N.H., hosted round five of the NEATV-MX series. In Pro class action, Creamer took both holeshots and checked out on the competition in each moto on his way to a 1-1 sweep and overall victory, his fifth of the year. He mirrored that performance in the Pro-Am class, posting another 1-1 sweep to further his class points lead. Can-Am racer Michael Troiano finished second in the Pro-Am class.
“The BCS Performance / Can-Am DS 450 was running awesome this weekend and everything went according to plan. It was a great weekend for us and I am really happy to put Can-Am on top of the podium again,” said Creamer.

Four amateur Can-Am DS 450 racers won five classes at MX101. Mike Kamalsky won both the 30+ A and 40+classes. Matt Pomeroy (25+), Chris Dipietro (Production A) and Ryan Dyer (Production B) each won their class.

In Texas, the weekend was long but rewarding for Hunter and Cody Miller, as both Can-Am X-Team racers earned victories in their home state. This past Saturday, Hunter and Cody traveled to Legacy Farm in Paradise, Texas, to race their Can-Am Commander 1000 X side by sides. Hunter led every lap as he won the UTV Unlimited class. Not to be outdone, Cody also posted a dominant win in the UTV Limited class. The brothers then drove to Oak Hill MX in Alvord, Texas, to race round seven of the TQRA series.

Hunter, who secured the 2012 TQRA SXS class Championship at round six, outgunned his brother in both the Pro and Pro-Am classes, earning two overall victories on his Louis Powersports-backed Can-Am DS 450. He posted 1-1 moto scores to win the Open Expert class, while Cody finished second. In the Pro-Am class, Cody won the first moto, but Hunter earned the second-moto victory to notch another overall for the weekend.

“It was a fun racing this weekend. Cody and I had a great battle going on in the final Open Expert moto, but I was able to get the win, so I’m pretty happy about that,” said Hunter Miller. “I’m really happy to give Can-Am a SxS Championship as well this year, and I’m going to do everything I can to give them another one.”

At Hawkeye Downs in Cedar Rapids, Iowa, Can-Am X-Team / CR21 Racing rider Zach Harris pulled all the holeshots in both his classes to take the overall wins in the Quad A and Quad A Production classes.
For more information on Can-Am racing, the entire 2012 schedule, the ’12 contingency program and DS 450 amateur racer support program, please visit www.can-amxteam.com.

Sea-Doo, Ski-Doo, Lynx, Evinrude, Johnson, Can-Am, Rotax and the BRP logo are trademarks of Bombardier Recreational Products Inc. or its affiliates.  All other trademarks are the property of their respective owners.