Valcourt, Québec, March 26, 2013 – Motoworks / Can-Am pro racer Josh Frederick suffered a serious back injury after crashing during the Pro ATV race Sunday at round three of the World Off-Road Championship Series (WORCS) in Lake Havasu City, Ariz. Medical crews were on the scene quickly and, after complaining of the loss of feeling to his legs, he was transported to a local hospital for evaluation. Further examination revealed that Frederick’s T-5 vertebrae was fractured during the violent crash. Frederick was then flown to a level-one trauma center in Las Vegas for additional examinations and surgery.
Frederick underwent surgery Sunday evening to remove the piece of bone lodged in his spine and his back was fused. The surgery was successful and Frederick is now resting comfortably at the hospital. He did not regain feeling to his legs after the surgery and due to the amount of swelling it is not currently possible to determine a time frame for potential recovery or paralysis. Josh has been fitted with a back brace and on Tuesday he will start therapy.
“Josh is such a wonderful person, a devoted father and husband and a dedicated professional racer. While it deeply saddens me to learn of the severity of this injury, I also know that Josh is an extremely hard worker, a fighter and a true champion, I pray that he will persevere and overcome this challenge,” said Jimmie O’Dell, Race Manager, Can-Am. “Josh and his family are in the thoughts and prayers of everyone at BRP and the entire Can-Am racing family.”
Frederick will not be racing for the remainder of the 2013 season and the Motoworks / Can-Am team will shift its focus to ensuring Frederick has everything he needs during this recovery. Frederick and his wife thank everyone for the outpouring of support from his fans, fellow WORCS racers and the entire international racing community.
“[We’re] Trying to stay positive. Prayers are definitely appreciated,” said wife Tiffany Frederick. “He’s way bummed and worried about everyone but himself. This is going to be a long, wait-and-see outcome. We have faith in the power of healing but also know it is always God’s will.”
He was currently competing in both the Pro ATV class and SxS Pro Production classes in WORCS, along with the SCORE series where he was defending his #1a ATV title for the Motoworks / Can-Am race team. He recently earned the first-ever WORCS podium finish for the new Can-Am Maverick 1000R X rs side-by-side at round two and was the racer who gave the DS 450 its historic first win in 2007. 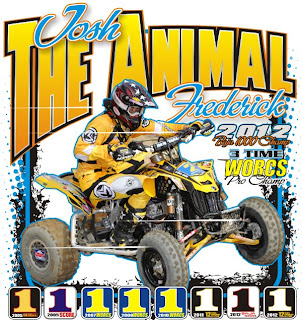 The Josh Frederick Foundation has been setup and could use your support. Please head over and “Like” the new page and do what you can to help the Frederick family.