Reno Nevada – Brian Bush and copilot Drew Schultz capture a 4th place iron man finish in the longest off-road race in America, ‘Vegas To Reno’. The 534 mile journey began in the small Nevada mining town of Beatty, and would traverse through the relentlessly unforgiving desert terrain, grassy green washes, and the pine tree covered mountain tops that Nevada had to offer.

The weeks leading up to this race were somewhat of a controlled chaos in Brian’s Gilbert Arizona race shop. Brian and race teammate and sponsor John Melvin of JM Collision had spent many months building a chase truck for the #1911 pit support vehicle. Due to the extensive work that was performed, the truck wouldn’t be in Bush’s possession until a few days prior to departure for contingency and technical inspection in Las Vegas. Prep of the trucks tooling, parts, radio, gps, and the like, combined with final race prep of the #1911 Polaris RZR XP1000, would be enough to keep Bush locked away in the shop for 3 days straight thrashing until the very last minute. Brian and team would arrive at tech about an hour prior to closing and the start of BITD’s mandatory drivers meeting. After the meeting, the team of Bush Racing would continue onto the town of Beatty in order to buy a couple extra hours of sleep before the early 5:00am pre-race staging. The morning of the race was unusually calm. The team was prepared, race fuel had been purchased, truck tank was full. There wasn’t much left to do save for fueling the drivers and topping of their camel backs with water. The #1911 drew a 24th starting position which was near the back of the pro field. Brian and Drew knew that it would be a long day and that pacing themselves would be necessary in order to finish. Neither had ever iron manned a race of this distance and weren’t sure what to expect.

As the blinding sun rose over the mountains to the east, the team would take the green flag and venture out into the vast Nevada desert. Traveling into the sun and dust that had been kicked up by the 23 competitors ahead of them, it was obvious that the two had their work cut out. For nearly 70 miles the team would battle with relentless blinding dust and traffic from their class, as well as the handlebar classes. The team experienced a flat tire trying to pass the Murray brothers. Once close enough they noticed that they too had a flat. The two teams would play leap frog pushing onto the next pit with compromised tires. As it would turn out, their rubber succumbed to the gnarly terrain. They were forced to stop and change the flat. This would cost them what seemed to be all the positions they had acquired in the first leg of the race. Having taken fuel and nourishment at their first scheduled pit, the two went on, back into the desert with seemingly calm nerves. There was a long way to go, and they were confident that they had what it would take to make the finish line. The two would suffer another flat tire around race mile 145. This would cost them about 5 minutes down time while Brian got out to change it. See, Drew had never used the teams new tools, and jack setup and Brian knew that time would be saved if he did it himself. When Brian got back in the car, no sooner than he plugged his helmet back into the intercom, he would inform Drew that he was fired. A few laughs were shared and the team would settle back into a swift pace and begin battling for their lost positions. A “back of the pack” strategy of Brian’s was to not concern the team with the races of their competitors. Rather only focus was the race that they were running. Because of this, they had not kept track of, nor had asked about their whereabouts within the pack of race teams. Up until their last scheduled pit, about 100 miles short of the finish line, Drew and Brian were running a “just finish” race pace. This was until the two noticed that the #1921 car of their friends at UTV Inc had come into the pits just behind them. This would act as a catalyst and light up Brian’s competitive nature. Ignoring any warnings from team members, Brian would set out into the last 100 miles of race course with a point to prove. There was no looking back, and certainly no room for lost positions at this point during the race. The crew of the #1911 car would inform the two that there were 3 trophy trucks leaving pit 14 and that they would need to watch out for them.

Brian would put the fear of being overcome by trophy trucks behind him and would settle into one of the fastest paces he had ever driven. Jason Voss would be the first trophy truck to pass them and he would make his pass gracefully, and without conflict. What the #1911 team had never experienced before was the copious amount of dirt that is displaced by a speeding trophy truck. It was incredible. Driving blind with the understanding that stopping on the course could be deadly, the two only had one option and that would be to stay in it and hope for the best. When the dust settled, it was obvious that they had gone off course as they were now in a wash next to the race course per their GPS. The next TT to pass would be that of the Terrible Herbst team. The #1911 racers were relieved to have fair warning as the Herbst heli would fly over them letting them know that yet another TT was closing in on them. The third TT to pass the two wouldnt go so smoothly. Having some warning, Brian would look for the first clearing he could find to make room for the closing TT. Somehow during the pass, the truck would move into the side of the #1911 and remove them forcefully from the race course. Luckily, this wouldn’t compromise the car, nor the nerves of the drivers. The last leg of the race would wind up and over a beautiful mountain pass and head down into the valley of Carson, NV. Brian and Drew would hold off their competitors, as well as pass two other UTV’s within 10 miles of the finish line. The excitement of finishing that the team experienced sharing radio communication with their crew, would double when they were informed that they were the 4th car in their class to finish the brutal 534 mile race! ​Brian and Drew would like to thank their crew, JB, Burns, and Dallas. Also high on the list is his good friend John Melvin #1912 who really stepped up to make the #1911 chase truck happen. PPG automotive finishes, as well as Single Source for materials and supplies. Brian feels that having a properly setup chase truck is a staple in a strong desert racing campaign. 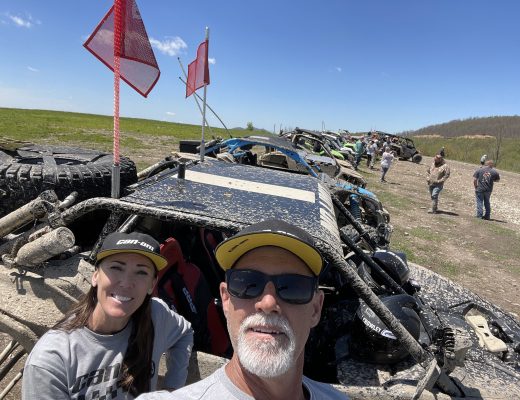