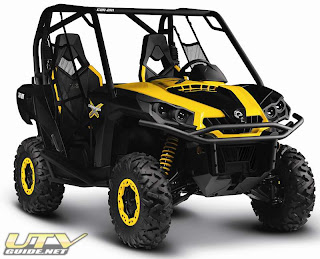 Valcourt, Québec, January 13, 2011 – Last season, Can-Am ATV racers saw their most successful campaign of racing yet. This year, in addition to taking to the tracks on Can-Am ATVs, BRP adds side-by-side vehicle racers to its roster of factory-supported pilots across North America with the introduction of the Can-Am Commander side-by-side vehicle to the racing world.
“Continued success on the track means continued improvement for our line of products,” says Denis Morin, vice-president, Product Development & Racing. “We at BRP were pleased with last year’s pro and amateur championships. For 2011, we look forward to seeing the results of our factory-supported pro and amateur racers and cannot wait to race the new Can-Am Commander side-by-side vehicle.”
Team Warnert Racing / Can-Am
Warnert Racing will concentrate on bringing the Can-Am DS 450 championships in the XC1 Pro class and the Women’s class for 2011. Returning in the XC1 Pro class is long-time Can-Am racer Chris Bithell, who finished fourth overall last season. This will be his third season with Warnert Racing on the DS 450. Joining Bithell in the XC1 Pro class is Adam McGill who is looking to improve on his third-place finish in the XC1 Pro class. Lexie Coulter returns to Warnert looking for her first Women’s class championship.
Jeremie Dudding will race all six rounds of the GNCC side-by-side vehicle racing series in a Warnert Racing-prepped Can-Am Commander 1000 X side-by-side vehicle, and he will compete in the UTV Modified class. Dudding has been a long-time Can-Am ATV racer and is making the switch to side-by-side vehicles in 2011.
Team Motoworks / Can-Am
Motoworks will build on its late-season success that saw teammates John Natalie and Chad Wienen combine to win three of the last four rounds in the AMA ATV Motocross national championship. Both racers return on the DS 450 with one goal in mind: a national motocross championship.
In the WORCS series multi-time champion Josh Frederick is back to defend his No.1 plate in the Pro class. He will be joined full time by teammate Dillon Zimmerman. Jeremie Warnia will also race selected WORCS races in the Pro class. All three riders will be on the Can-Am DS 450   ATVs.
For side-by-side vehicle racing, Mark Holz will compete in SBS Class 1 of the WORCS championship in a Motoworks-prepped Can-Am Commander 1000 X side-by-side vehicle.
Team BCS Performance / Can-Am
Cody Miller returns to defend his Pro and Pro-Am class championship in the NEATV-MX series on a DS 450 in 2010. Joining him in the pro class will be Miles Santaniello, also on a Can-Am DS 450.
Team Gorilla Axle
BRP is pledging support for the Gorilla Axle Mud-Racing team this season. The team will represent BRP with Can-Am Outlander 800R X mr ATV – which it helped develop – and Can­Am Renegade 800R ATVs at various mud races and events throughout 2011. The Gorilla Axle Team will also race the new Can-Am Commander 1000 side-by-side vehicle in selected mud races.
MPR Racing
Mike Penland, one of the most popular and respected figures in the history of ATV racing returns on a Can-Am Outlander 800R XT ATV to race next season in the GNCC racing series.
Can-Am X-Team
In addition to the partner teams, BRP offers factory race support to numerous riders. In the AMA ATV Motocross Championship, Pro-Am Production champion, Chase Snapp, will move into the Pro 450 class aboard a DS 450. Snapp took five overalls in the Pro-Am Production class last season and finished off the podium only three times last year; he also finished second in the Pro-Am Unlimited class. Defending Production A class champion Cole Henry will move to the competitive Pro-Am Production and Pro-Am Unlimited classes on a DS 450. His brother, Chase Henry, who won the Four-Stroke B championship, will move to the Production A and Four-Stroke A classes.
In the GNCC series, defending class champion, Bryan Buckhannon, will compete in the 4×4 Open class on a Can-Am Outlander 800R X xc ATV, alongside Michael Swift and Zac Zakowski. In the 4×4 Lites class, Kevin Trantham will look to repeat as the class champion on his Can­Am Outlander 500 XT ATV. Cliff Beasley will defend his U2-class championship aboard a Can-Am Renegade 800R X xc ATV as well.
The CMRC Quebec provincial series will see Richard Pelchat and Pier-Olivier Lavergne race motocross in 2011. While in the Canadian FMSQ cross-country series, Amélie Lavallée will defend her series title racing aboard a Can-Am DS 450 for the Can-Am X-Team.
Racing the Extreme Dirt Track ATVA Nationals series will be Chuckie Creech on a DS 450. Creech will contest the Pro, Pro Lites and Pro-Am classes.
In Texas, as part of the TQRA race series, Hunter Miller returns to defend his Open Expert and Pro-Am class championships on the DS 450. He will also defend his Pro championship the Texas Off-Road Nationals ATV Series (TORN) as part of the Can-Am X-Team. Joining him in the TQRA Open Expert class will be Pro Johnny Hale.
Visit www.can-amxteam.com for more information on the contingency program, photos on the 2010 season along with information and results from the upcoming 2011 ATV racing season.
Bombardier Recreational Products Inc. (BRP), a privately-held company, is a world leader in the design, development, manufacturing, distribution and marketing of motorised recreational vehicles. Its portfolio of brands and products includes: Ski-Doo and Lynx snowmobiles, Sea­Doo watercraft and boats, Evinrude and Johnson outboard engines, direct injection technologies such as E-TEC, Can-Am all-terrain and side-by-side vehicles and roadsters, as well as Rotax engines. BRP products are distributed in more than 90 countries.
www.brp.com