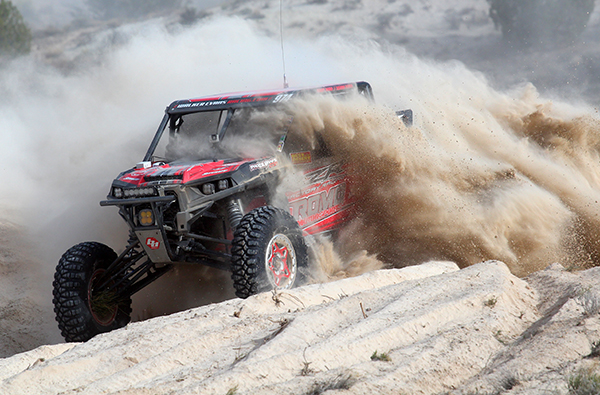 As of today, 47 Trick Trucks have signed up to tackle this tough 540+ mile course. Stellar competitors like Rob MacChacren, Jerry Whelchel, Tony Smiley, Justin Lofton, Jason Voss (will he win again?), Bryce Menzies, Steve Olliges (who hands the Team Ford $1,000 cash award for the fastest time in Time Trails), and the list goes on and on. More than 35 Class 6100 Spec Trick Trucks, over 100 UTVs, and 50+ motorcycles are ready to launch.

A newcomer to off-road racing, Laird Hamilton, the world’s most prolific big wave surfer, travels the world in search of the gnarliest waves and the most epic rides. He’ll be ditching his prowess on the waves to challenge the sand in the Nevada Desert in a UTV. He’s also handing out samples of his Laird Superfood products at Contingency and Racer Registration for anyone who wants to stop by..

Daryl Folks, co-owners with Bryan Folks, had this to say about the record turn-out, “Bryan and I, and the entire staff, are thrilled to have more than 365 race teams ready to do battle at the General Tire “Vegas to Reno” presented by Fox. The parking lot at Texas Station, our host hotel in Las Vegas, will be overflowing with the leading names in off-road products as these teams wind their way through contingency on Thursday, August 16th. I invite anyone interested in seeing these high-powered 800+HP race vehicles up close to come on by and meet the drivers and team members.”

This will be the 22nd running of this epic event. The General Tire “Vegas to Reno” presented by FOX also represents the unofficial kick-off to the second half of the Best In The Desert 2018 race season. “Vegas to Reno” was an absolute favorite of Best In The Desert founder, Casey Folks. It marked his first race where he added car, truck and quad race vehicle classes to his already established motorcycle classes. Phil Blurton and co-pilot Beau Judge put the No. 944 Can-Am / No Limit R&D Maverick X3 Turbo R side-by-side vehicle atop the podium at the 2017 Best In The Desert Vegas To Reno race in Nevada.

Operations Manager, Donald Jackson, who worked side-by-side with Casey for over 14 years commented  “The course is marked and the clock is ticking down to the start of our flagship event next week. We have hundreds of volunteers helping man the course, along with the entire Best in the Desert Staff. This will be an exciting event, representing absolutely the ultimate desert racing adventure. We are all dedicated to making sure “Vegas to Reno” will always continue in the great tradition and spirit that Casey would want.”

The General Tire “Vegas to Reno” presented by FOX race is a long distance point-to-point course, offering extreme elevation changes and every kind of challenging terrain. For 2018, the General Tire “Vegas to Reno” presented by FOX is a traditional single race day format. At over 540 miles in length, the race will start in Beatty, Nevada and end just south of Reno, in Dayton, Nevada, home of Nevada’s first gold discovery. Elevations along the course vary from around 3,000 ft. to over 7,200 ft. Temperatures will range from the high 90’s during the day to the low 40’s at night through the higher elevations. From Beatty, the course travels north past many towns that were rich in Nevada’s silver and gold rush mining history, including Goldfield, Tonopah, Hawthorne, and Rawhide. Over 365 car, truck, UTV, motorcycle and quad race teams already registered, with entries from the U.S. and around the world will gather to compete in this year’s General Tire “Vegas to Reno” presented by FOX. Race related events get started Wednesday, August 15, when the Trick Trucks and Class 1500 Unlimited Cars face off for starting order at Time Trials. Here they’ll compete head-to-head for the $1000 “Team Ford Pole Award” and the chance to be the first vehicle off the line and a dust-free shot at the coveted top overall finish position.

“Vegas to Reno” activities continue in Las Vegas on Thursday, August 16, for Racer Registration, Technical Inspection, and Contingency. Best In The Desert thanks our host hotel, Texas Station, where these proceedings will take place. Contingency will be located in the parking lot of the Texas Station and race fans will have the chance to see the most unbelievable collection of high-tech desert Cars, Trucks, Motorcycles, Quads and UTVs specially built for racing. Plus hundreds of the off-road and racing industry’s top manufacturers will have their latest products and accessories on display for everyone to check out.

The 2018 General Tire “Vegas to Reno” presented by FOX will start early Friday morning, August 17, in Beatty, about 100 miles north of Las Vegas. First off the line will be the Motorcycles followed by the Quads. After a substantial delay for safety reasons, the Car, Truck and UTV classes will head out on their quest to reach the finish line at the Dayton Events Center with hopes of a class victory. Due to the long distance of the racecourse, a 24-hour time limit has been set, so racers may still be coming across the finish line well into Saturday morning, August 18. The Awards Presentation will take place Saturday evening at the Sparks Nugget in Reno, Nevada.

About Best In The Desert
Best In The Desert is recognized as the largest professional desert off-road racing organization in North America and holds multiple off-road desert races. The philosophy of the organization is to provide top quality, World Class Off-Road Racing events, and more importantly, to make those events exciting, spectacular, fun, different, well paying, and most of all, affordable. Based on over three decades of experience, and on years of sponsoring and promoting successful local and national events, Best In The Desert has achieved new levels in the sport of off-road desert racing. Best In The Desert, along with its racers and sponsors, enjoys recognition and exposure that sets it apart as “The American Off-Road Racing Series”.

About FOX FACTORY
For over three decades, FOX has been an industry leader in the design and development of high performance shock absorbers and racing suspension products for snowmobiles, mountain bikes, motorcycles, ATVs, UTVs, off-road cars, trucks, and SUVs. FOX equipped vehicles and racers have stood atop podiums in every sport we have competed in — from the sands of Baja, to USA deserts to the dunes of Dakar. Our team of engineers perform rigorous tests with our athletes year round. The data we collect from performance testing and our application of that knowledge to our product is what separates FOX from every other suspension company. 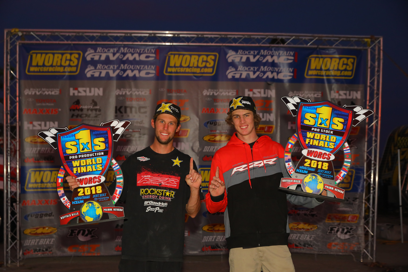