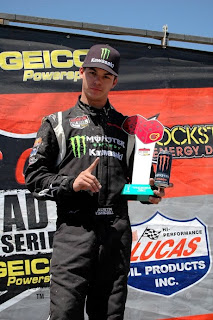 Irvine, Calif. – Monster Energy Kawasaki’s Austin Kimbrell took Las Vegas by storm with a dominating performance during the fifth and sixth rounds of the Lucas Oil Off Road Racing Series at Las Vegas Motor Speedway. He earned maximum points on the weekend between winning both rounds, earning both top qualifier spots, and leading the laps going into the mandatory caution. Monster Energy/Funco/Kawasaki’s Chad George was not far behind Kimbrell, finishing second during Saturday’s race and third on Sunday. Helping to make it a Kawasaki podium sweep on Sunday, Muzzy Kawasaki’s Bobby VanBeekum finished second and came close to the podium on Saturday with a fourth-place finish.

Taking It All
After a tough weekend at his hometown race in Arizona last month, Kimbrell not only came out with two wins for the weekend in Las Vegas, but with four extra points for his efforts during qualifying and lead laps.

“We had a great weekend,” said Kimbrell. “We didn’t change much from the last race. We just seemed to have better luck. I am really happy that we made up a lot of points after that tough round last month. I am only a couple points out of first. I just want to keep it up for the next round.” Being Consistent
George and his team have been racing for many years and they know championships come with consistency. The No. 642 Teryx has been on the podium four out of the six rounds, helping place him on top of the point standings after his performance over the weekend.

“I felt like I drove well,” said George. “I just made a few mistakes and the track was really hard to pass on. We want to be on top of the box, but we will take the points. We have always said that solid weekends make champions and I want to keep pushing for good finishes.” 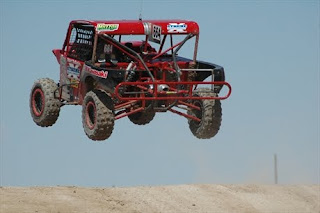 Van Beekum
With qualifying not going his way for Saturday’s race, VanBeekum had his work cut out for him as he started 13th and moved his way up to fourth, nearly catching third. Taking the information from the race, team owner Rob Muzzy made the necessary changes to help VanBeekum push his way up to his fourth podium finish of the year.

“We had a little set back with a fuel issue on Friday,” said VanBeekum. “We had to take what we could get (with fuel) and the car wasn’t set-up for it. After the race on Saturday, Rob (Muzzy) went to work and really gave me a great car to work with on Sunday. It was like the car came alive.”

First For RUV’s
The next round brings the drivers to Miller Motorsports Park in Tooele, Utah for the first time. Kimbrell, George, and VanBeekum have yet to race the course and are excited for the new opportunity.

“I hear the facility is awesome,” said Kimbrell. “I am really looking forward to something new.” 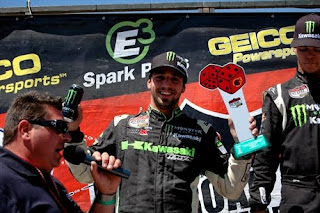 HOLZ RACING PUTS FIVE ON THE PODIUM AT WORCS