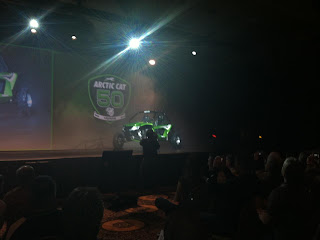 Arctic Cat has strived to bring innovative designs and technology to their customers since 1962. With 2012 marking the brand’s 50th Anniversary, the bold off-road styling cues of the Wildcat’s bodywork coupled with its aggressive sport stance and interior suggest Arctic Cat will move to the forefront as the industry-leader in the pure sport ROV segment.

“This is the Year of the Cat! It’s also the Year of Excitement,” Claude Jordan, CEO told dealers in attendance. “Inspired by race bred and race proven designs, we are committed to giving our customers the highest-performance models they deserve in the snow and off-road categories, as well as future endeavors.”

Very few details were released regarding the Wildcat, but Jordan noted, “An extremely capable suspension is what all pure sport ROV owners are begging for, and we promise this will be an industry leader.” When asked about production dates, Jordan hinted, “You may see this in dealer showrooms during our 2012 fiscal year which would end next March.”

Arctic Cat Inc., based in Thief River Falls, Minn., designs, engineers, manufactures and markets all-terrain vehicles (ATVs) and snowmobiles under the Arctic Cat® brand name, as well as related parts, garments and accessories. Its common stock is traded on the NASDAQ National Market under the ticker symbol “ACAT.” More information about Arctic Cat and its products is available on the Internet at www.arcticcat.com.