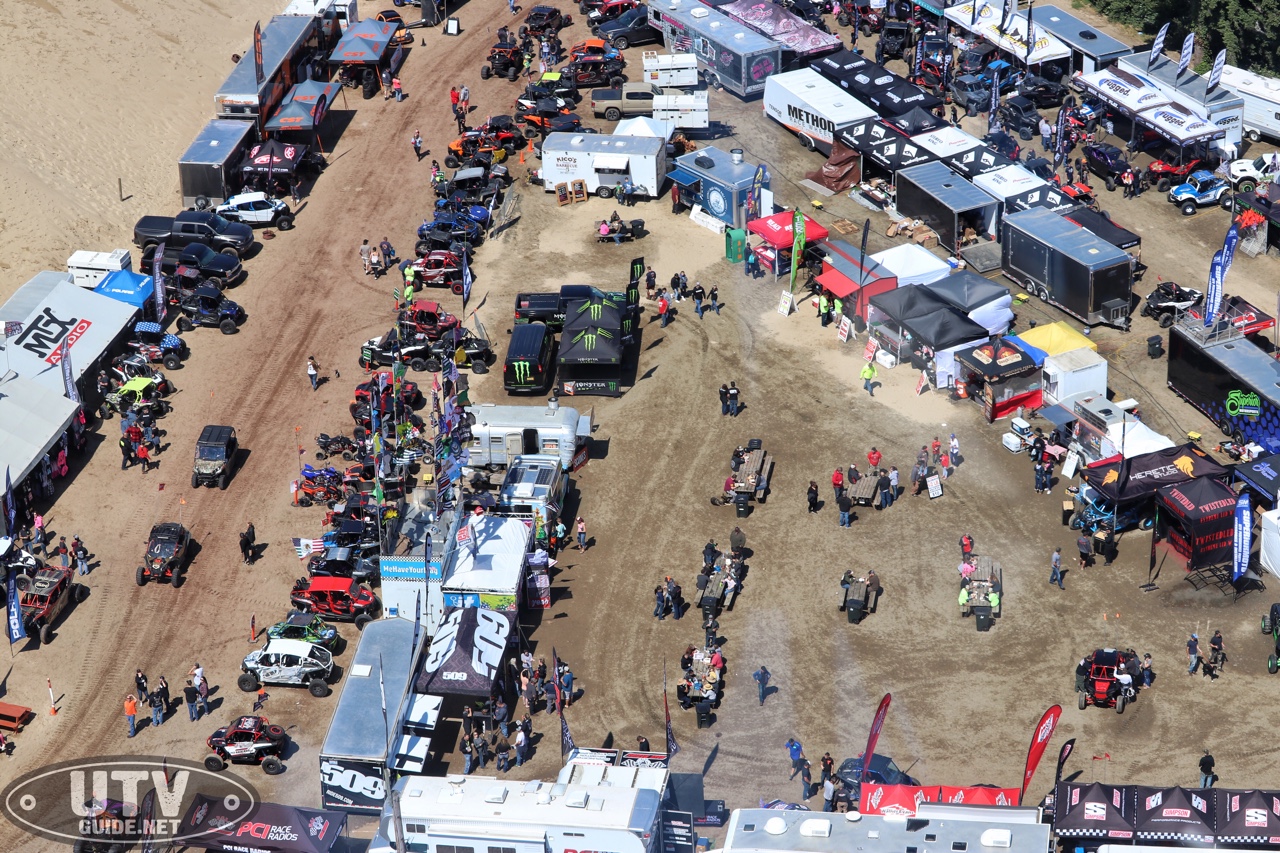 Early Tuesday morning we loaded up the camper, grabbed our gear, and started heading toward Coos Bay. 2019 was going to be my first year at the UTV Takeover –– and I didn’t quite know what to expect –– but I was already optimistic. Even though my only experience with the area was from a short trip to the Oregon Dunes when I was a kid –– even back then it only took a second to know that this place was special.

Along the long drive, I had ample opportunity to learn more about the event from my Dad, Jon Crowley.  “So it’s not a race…then what is it?” But nonetheless, I never truly understood what it was until I saw it for myself. 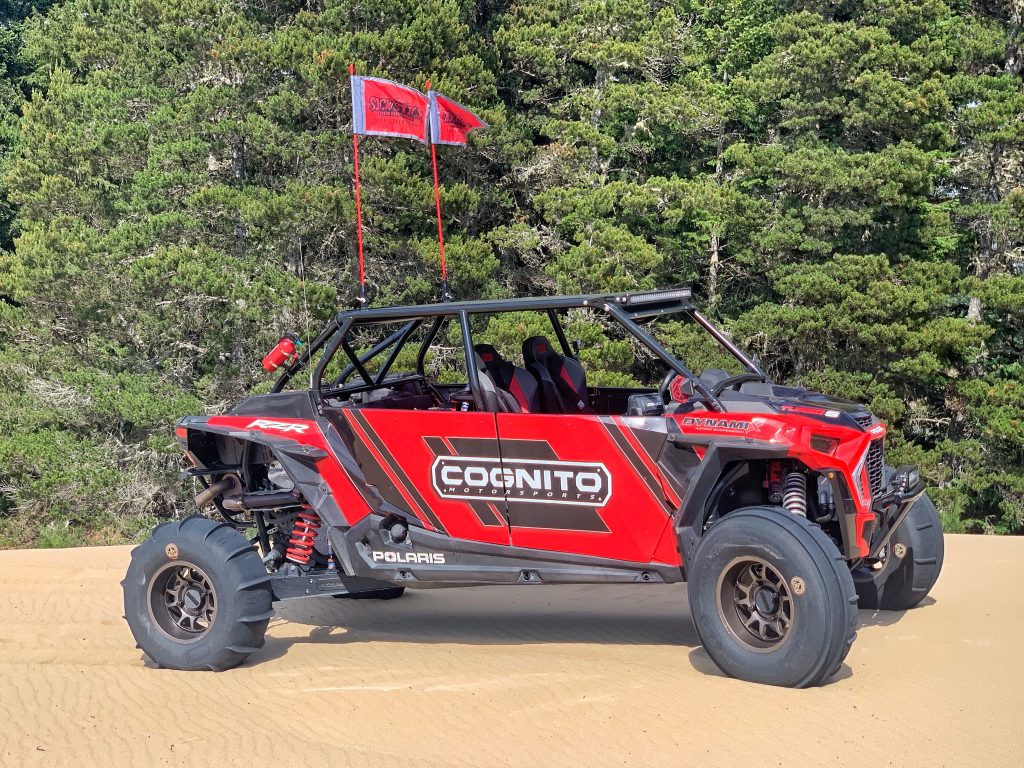 Unloading our stuff, it didn’t take long before we prioritized unloading our RZR XP4 Turbo S and headed to check out the event. The rest could wait. After a quick photoshoot capitalizing on the still empty dunes, we caught up with Steve Bechard from Rugged Radios in his commemoratively built RS1 and Reid Nordin from Walker Evans Racing in his Velocity Edition RZR for a quick ride to get some action shots.

Although I still wasn’t completely sure what exactly the UTV Takeover was at this point, as many enthusiasts hadn’t even arrived and the event fully started, I was starting to get a sense.

Even though the begrudgingly stereotypical Oregon rain tried to put a damper on things come Wednesday –– literally and metaphorically –– it nonetheless broke, giving us the opportunity to take Rugged Radios’ new Honda Talon 1000R for a spin.

By now, the vendor area had taken shape; I was taken back by the sheer number and variety of vendors that came out. From major manufacturers like Can-Am and Yamaha, to small, niche businesses for any gear you could ever need and even food ranging from confetti-colored-popcorn and Greek, to shaved ice, BBQ, and beer –– I was beginning to see why so many people come back year after year –– almost religiously –– to the UTV Takeover. In addition to the shopping, there’s also a variety of events ranging from formal offroad short-course-races and show and shine to bingo and tire toss competitions. 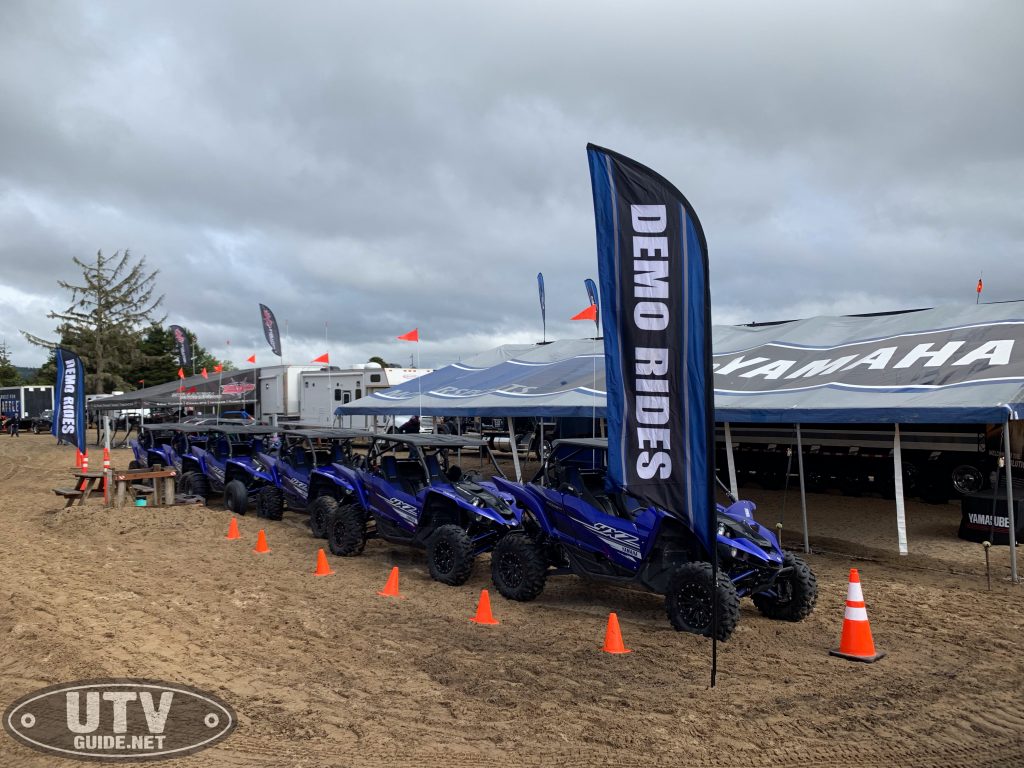 Another draw for people was the ability to demo new vehicles right there on site. Throughout the trip, I saw various group rides led by manufacturers heading out into the dunes. This unique aspect of the event provides riders the perfect chance to try out the latest and greatest sport UTVs on the market.

After a few rides, we were parked on top of a dune overlooking the Dirt Bike Huckfest while hundreds of other enthusiasts cheered them on and watched. With a continual stream of events happening, if you weren’t in the mood to ride in the dunes, you could just as easily park and watch. It seemed like there was always something going on.

The rain decided to stick around for Thursday morning as well, but that didn’t stop much. Jim McIntire, who is one of the organizers of UTV Takeover, was gracious enough to invite us for a media ride with Oregon Helicopters –– taking off from a dune just a few steps away from the commotion of campers and spectators. Heading toward the main entrance, we got a great sense of the true scale of the vendor setup and campsites from the aerial perspective. Then, heading back North, we flew low following the dunes taking pictures and occasionally waving back to the enthusiastic offroaders below us. 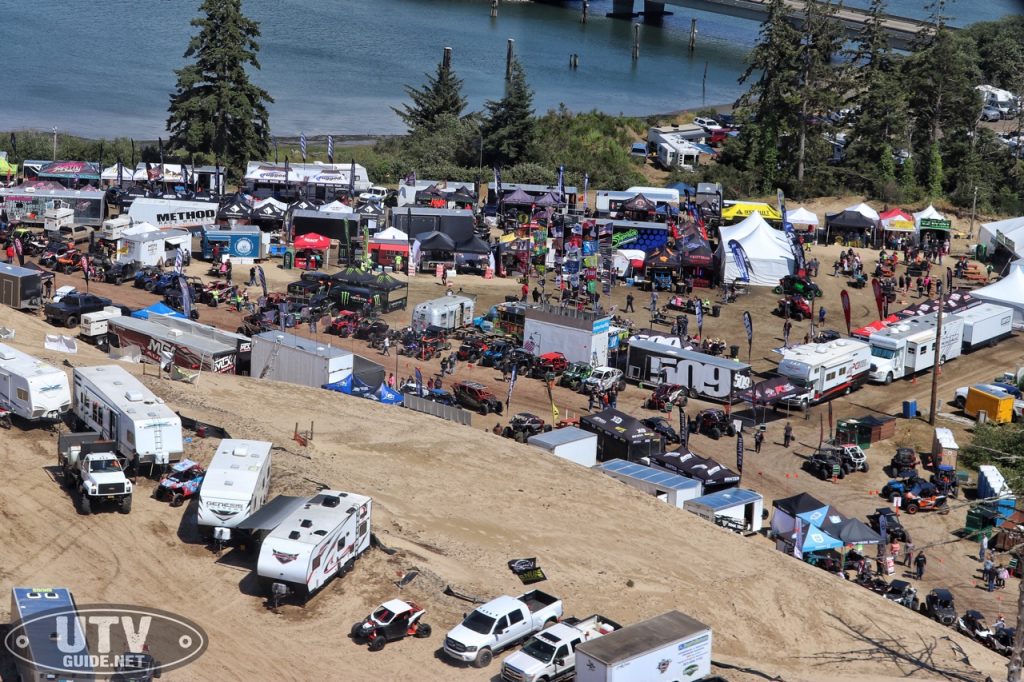 View of the vendor area at UTV Takeover from the helicopter

From above, you can you truly grasp this place in its entirety. The dunes alone are impressive.  Sprawling along 40 miles of the southwest Oregon coast –– from Florence to Coos Bay –– they’re not only the largest coastal dune complex in North America but one of the most unique as well. From thick Douglas fir and Sitka spruce forests and dunes reaching over 500 feet above sea level to countless small freshwater lakes and marshes, the Oregon Dunes website was accurate to say “adventure and wonder are truly around every corner.” From our advantageous viewpoint, we could see the winding trails through trees leading out to the ocean, countless freshwater lakes dotting the sand below, and the expansive bay that surrounds the parks southern end. 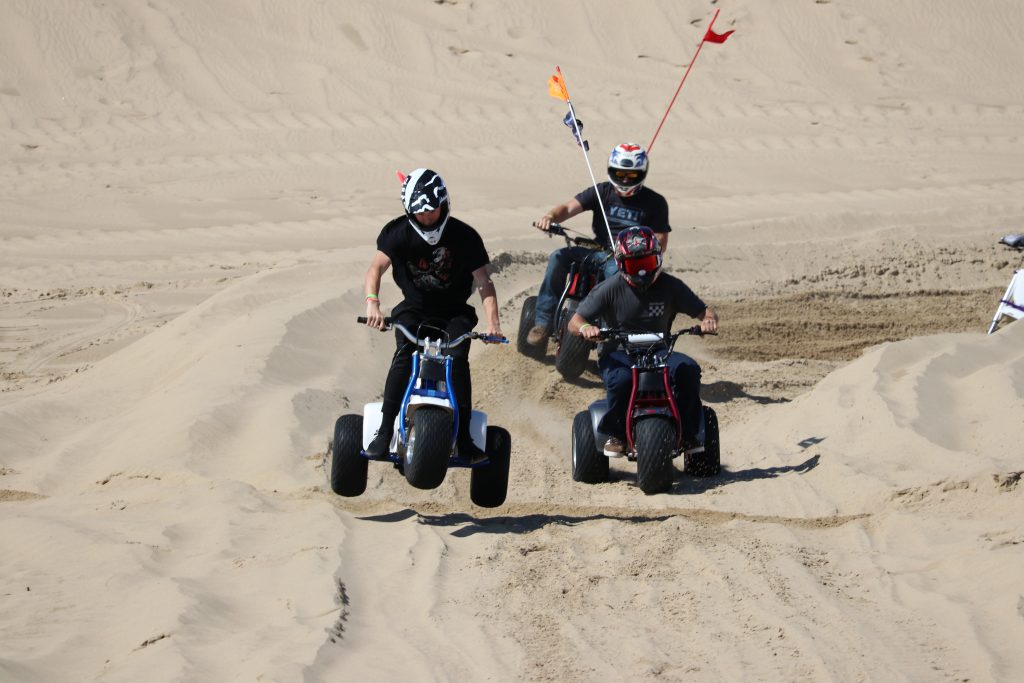 Upon landing, the excitement didn’t stop as we quickly rushed over to the watch the ATC 70s tackle the short course. Almost comedic seeing grown men dwarf their tiny vehicles, I was starting to see why people loved coming here so much. To everyone involved, it seemed to be much more about camaraderie and fun than racing purely for the win –– a theme which seemed to permeate most all my experience at the UTV Takeover. The riders laughed and joked with each other between “races” and spectators sat lined in their cars watching with their friends, family, kids, and even dogs too.

The next day, this became even more apparent. While waiting for the UTVs to take the short course, I was expecting a different atmosphere than the day prior. Although much more serious considering the vehicle-to-driver ratio was more in check, my impression from the day prior stuck. Most people were lined up next to their buddy’s car, waiting not necessarily to claim the blue ribbon overall in some glorious triumph but simply to get a chance to race one-on-one against their friends on this unique sand course. And with the UTV Takeover providing non-stop action and planned events, it creates a great environment for off road enthusiasts. 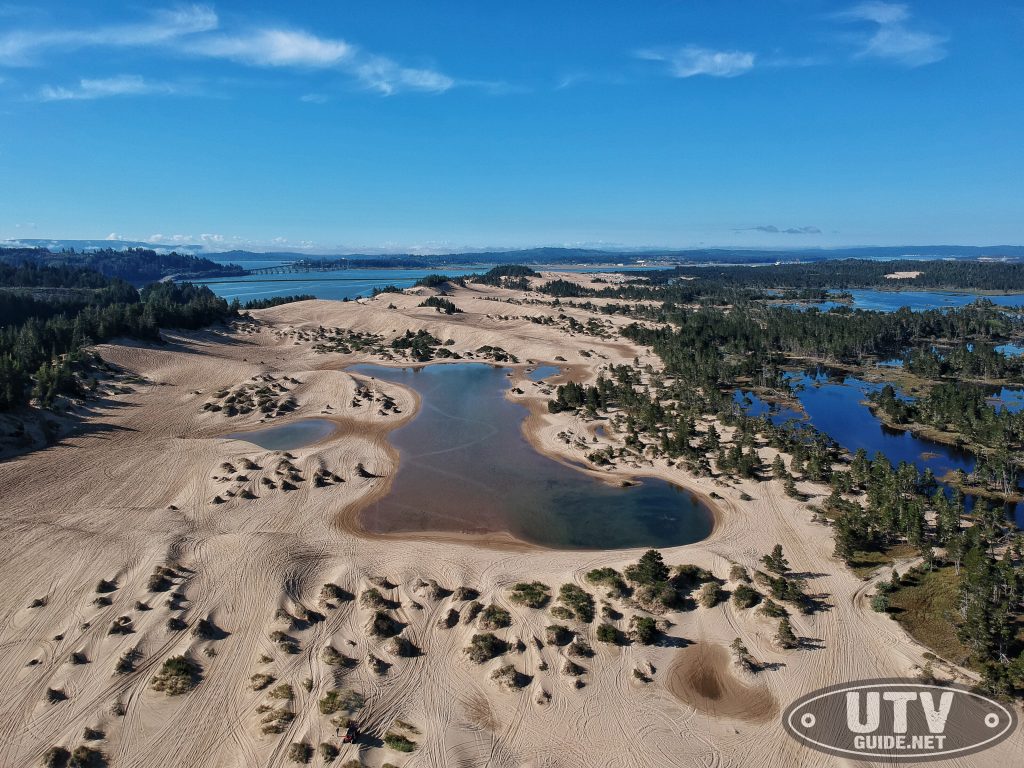 Nowhere was this more evident than on the night ride. We headed out into the dunes early on Friday night to get set up for shooting, but by just after 9:00 PM cars were already heading our way. The sheer amount of vehicles was impressive; group after group kept coming almost incessantly in a barrage of offroaders. I flew the drone to try and capture the aerial perspective while my Dad used GoPros on the ground to get a different angle. UTVs were still streaming north past us from Boxcar Hill campground while the lead vehicles had already hit Hauser and were on their way back. Literally hundreds of UTVs in what my Dad said was probably some sort of world record for group rides. It was interesting as well to see the wide variety of cars lit up too -– from the flashing whips to accent lights –– everyone was excited to go all-out and show off their car.

Nonetheless, the UTV Takeover itself is quite difficult to define. If I had to choose, though, it’s a community –– a community of people who love offroading like family. Yet thankfully, by fostering and facilitating essentially all things UTV for the week, the UTV Takeover isn’t simply just an event, but a place for passionate off-road enthusiasts alike to come together and have a great time doing what they love.

Unfortunately, we had to leave before the most popular spectator event at UTV Takeover — UTV HuckFest. Al McBeth reclaimed the long jump title and set a new world record at 188 feet.

Camp RZR Is Back In Glamis Over Halloween Weekend