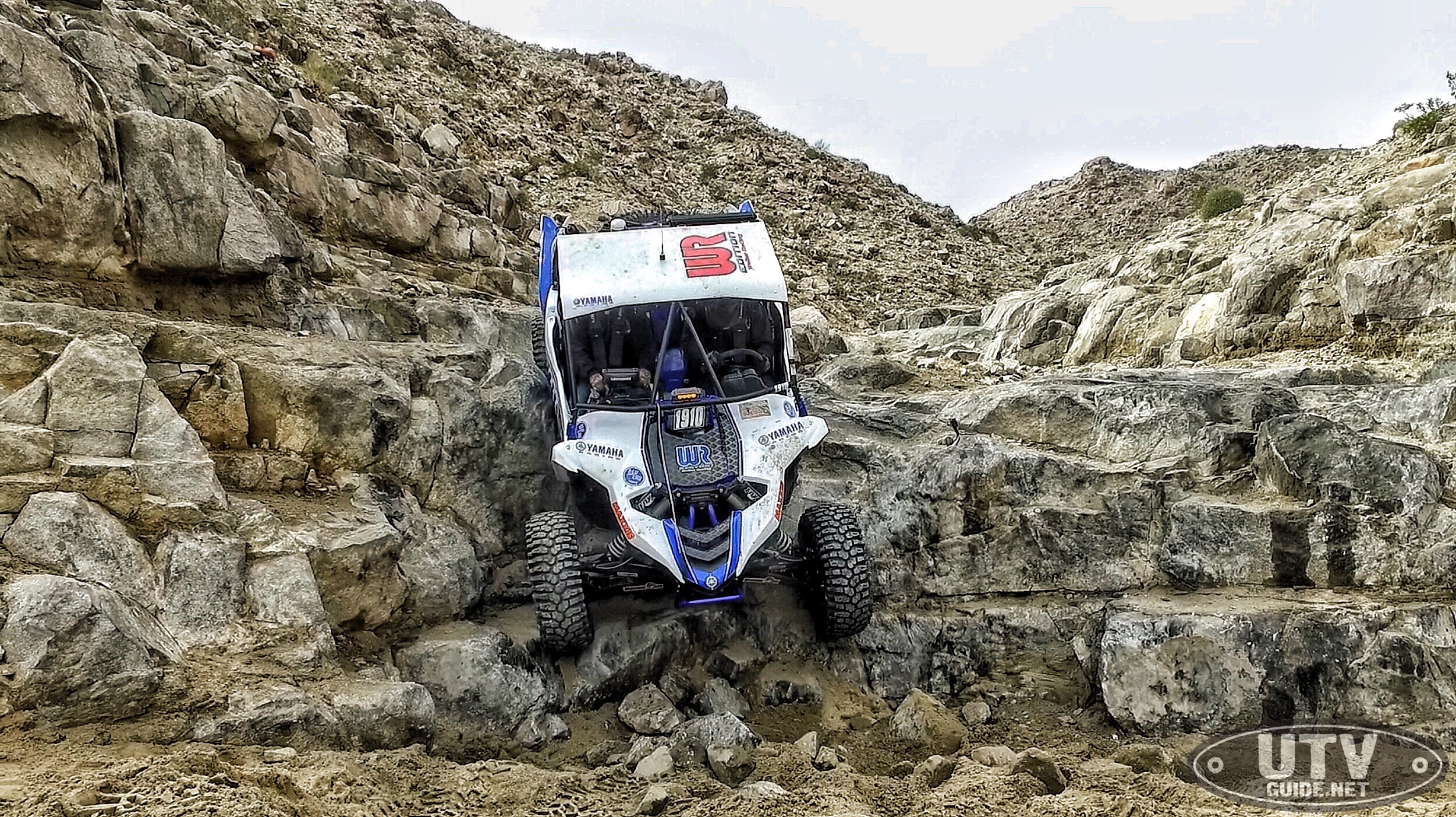 So far, I have made three pre-run trips and I was lucky enough to spread that out amongst factory backed teams that are racing for three different manufacturers.

It is always interesting to see how different teams approach this race, and this trip was no exception. Each vehicle has its pluses and minuses in different circumstances. It is interesting to note that all three teams are racing 72-inch wide long travel UTVs.  Blurton, Guthrie’s and Anderson with factory long travel from Can-Am and Polaris, and Weller with Cognito Motorsports long travel added to his YXZ1000R, Sims in his standard travel RZR. It wasn’t long ago that I thought long travel while being better in the desert, was a detriment in the rocks.  I am starting to change my mind after these trips.

We’ve made several trips to Johnson Valley already this year and on our most recent outing, we managed to catch up to the father and son duo of Mitch Guthrie Sr. and Mitch Guthrie Jr. Between the two of them, the pair hold 7 KOH titles; six for Mitch Sr. while Mitch Jr. earned his first win last year, making him the reigning champion coming into the 2019 event. Considering UTVs have only participated in KOH for ten years, that’s an impressive feat. Both Guthrie’s will have a target on their back come February and we were able to spend several days in the rocks with them while they were breaking in their new Polaris RZR Turbo S machines.

This will be the first year for either of the Guthrie’s to contest the event in a long travel vehicle. Long travel suspension is not typically synonymous with rock crawling but the Polaris RZR Turbo S platform, with it’s 168 horsepower and 72-inch wide stance is sure to be a threat at this years event. Check out the video below from our trip with the Guthrie’s as they take on some of the most iconic and ruthless trails in all of Johnson Valley.

We’ve got some exciting news today for King of the Hammers. Our very own @crowley.jon is going to jump in as codog for the current king @mitchguthrie5 for #KOH2019 Although some of our overall coverage may suffer, we hope to give you an inside look at racing with the Guthrie’s. #PolarisRZR #RockCrawler #KingoftheHammers @polarisrzr #letsdothis

Phil Blurton and Beau Judge are a factory Can-Am team who blasted onto desert racing scene two years ago.  Since then, the have wrapped up two consecutive Best in the Desert Championships (see BLURTON REPEATS AS BEST IN THE DESERT UTV PRODUCTION TURBO CLASS CHAMPION IN CAN-AM MAVERICK X3). King of the Hammers is a little different story for Phil and Beau.  2018 was their first time racing, and although they finished in the top ten, they knew they could do much better.

Last year, Phil and Beau had very little time to prepare with only a few days to pre-run in Johnson Valley during race week.  This year, they are on a mission.  This trip was their second to Johnson Valley this year, and they already have 5 solid days of pre-running in the bag.  They have not only run the entire course from last year, but have done most trails 2-6 times! 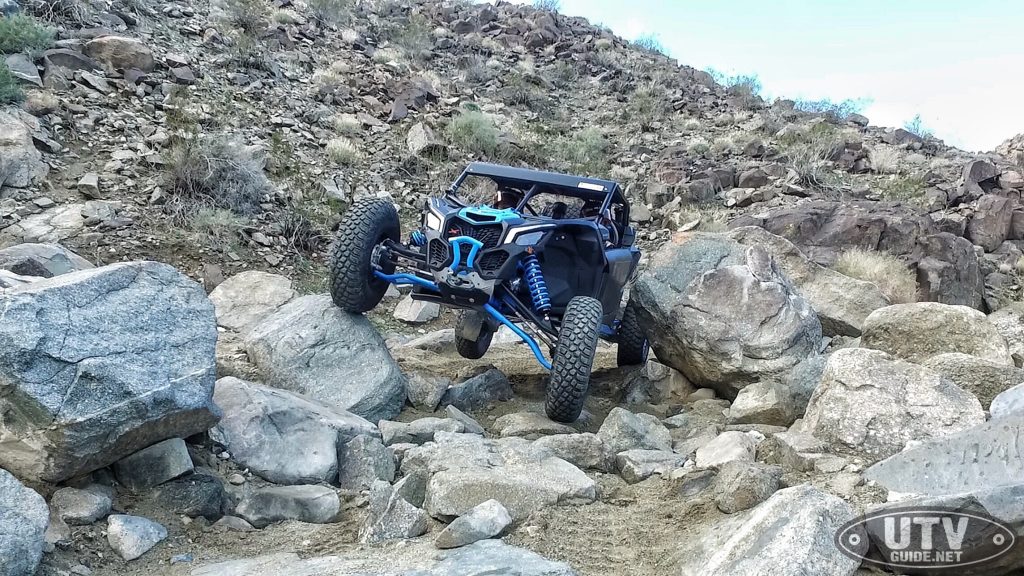 Jason Weller and Kyle Anderson teamed up four years ago to race a Yamaha YXZ1000R. Since then, they have entered two YXZs in the race with Kyle making a top ten finish in 2018.

For 2019, they are back to one vehicle with Kyle jumping back into the co-dog seat and Jason behind the wheel. This team has great experience rock crawling in a YXZ and knows what it takes to get it to the finish line. 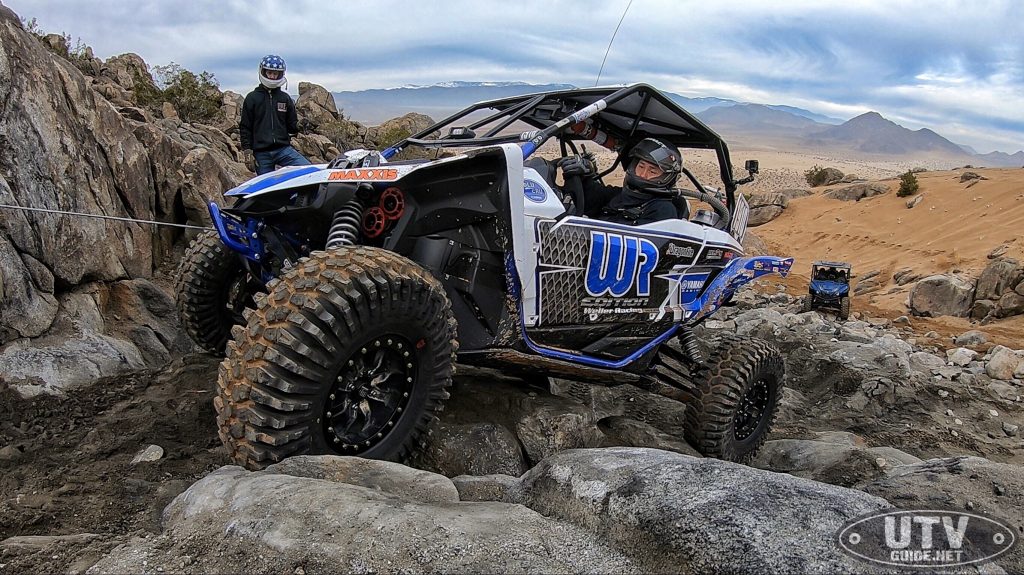 Branden Sims has taken on the King of the Hammers UTV race several times and landed on the podium three times (2nd, 3rd, 2nd), but he has yet to land on the top of the podium.  He will be racing a Polaris RZR XP Turbo Dynamix Edition (64-inch wide).

While certainly not new to racing UTVs, Ronnie Anderson has never rock crawled before.  He spent a few days in Johnson Valley under the tutelage of Reid Nordin from Walker Evans Racing and picked it up quickly. 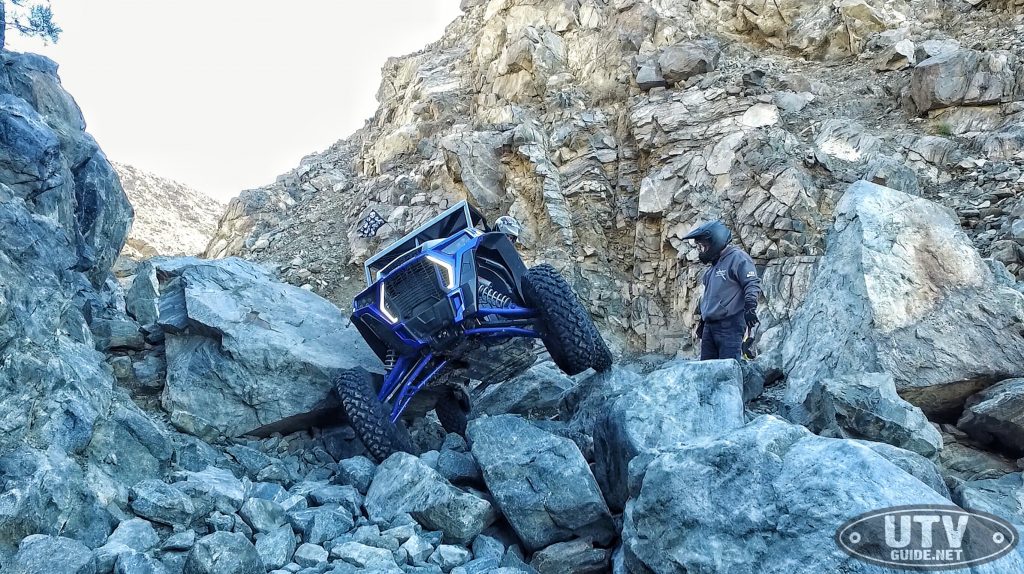 With the right person as his co-dog and a few more days practice, Ronnie could be a contender.

Could this duo be a contender at #KOH2019 ? @ronnieanderson52 has tons of experience racing @polarisrzr but never in the rocks. But his codog @reidnordin is a veteran desert racer and rock crawler with the temperament to get the car to the finish line. They have spent many days pre-running in Johnson Valley and we think they are definitely a pair to keep your eyes on. They will be racing a @walkerevansracing equipped Polaris RZR XP Turbo S. #PolarisRZR #KingoftheHammers #RockCrawler

Testing other vehicles in Johnson Valley 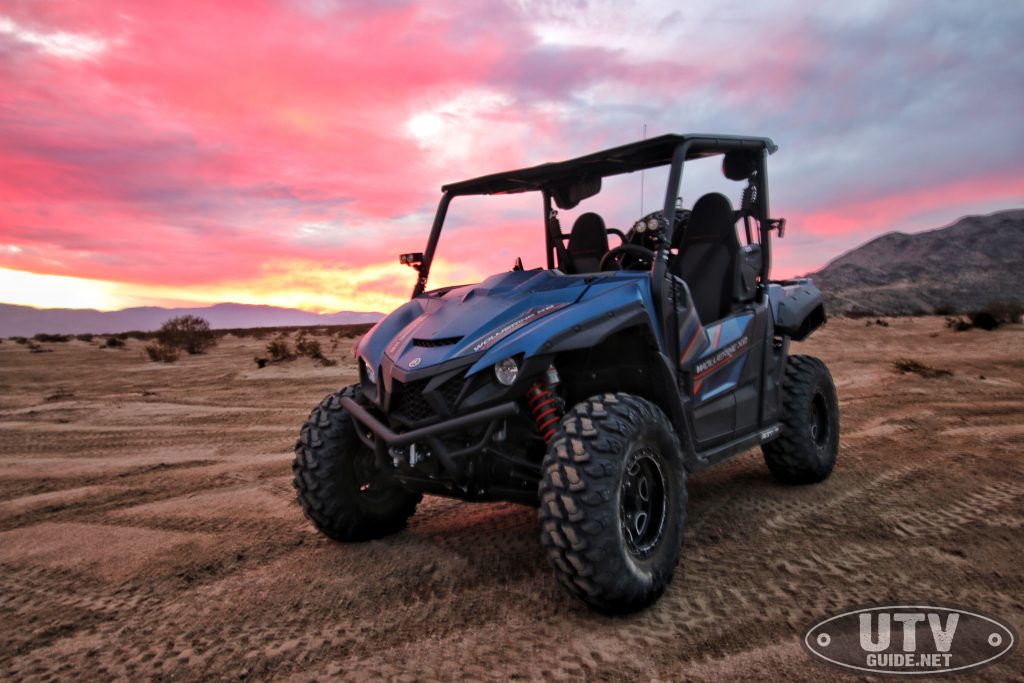 While I was there, I also tested out a few vehicles.  The first was our 2018 Yamaha Wolverine X2. We have done a build on this rec-utility vehicle and have put it through some more extreme riding terrain that show this vehicle with a dump bed can do more that just trail rides (see 200 MILE MOJAVE DESERT ADVENTURE RIDE and YAMAHA WOLVERINE X2 ROCK CRAWLING REVIEW).

Taking the rec-utility @yamahamotorusa Wolverine X2 up Boulderdash in Johnson Valley. This trail was part of the King of the Hammers course last year and we decided to try it out while pre-running with @wellerracing With 9-inches of wheel travel and 11-inches of ground clearance, you sometimes have to get creative. One thing for sure, the Wolverine X2 is a billy goat! #KOH2019 #kingofthehammers #johnsonvalley #Wolverinex2 #REALizeYourAdventure @yamahaoutdoors #LikeButter

Running up Chocolate Thunder in our Wolverine X2. This “trail” is always part of King of the Hammers, and is pretty extreme for a rec-utility vehicle. Our Wolverine X2 has two accessories that make rock crawling like this possible: Factory UTV UHMW skid plate and 30-inch GMZ Race Products Inc. Kahuna tires mounted on HiPer Wheels. Watch and see how the Wolverine X2 does.More details: https://www.utvguide.net/yamaha-wolverine-x2-phase-1-build-and-test/

The Can-Am Maverick Sport RC is a new vehicle for 2019. It is based on the new Maverick Sport, but has a few modifications that make it more adept at rock crawling. Upgraded FOX shocks, HMW skid plate, 30-inch tires, 64-inch stance and a winch make this Maverick Sport into a RC (Rock Crawler) model.  We broke it in at the Sxs Adventure Rally in stock trim, then tried it with 33-inch tires. Check out our first review: 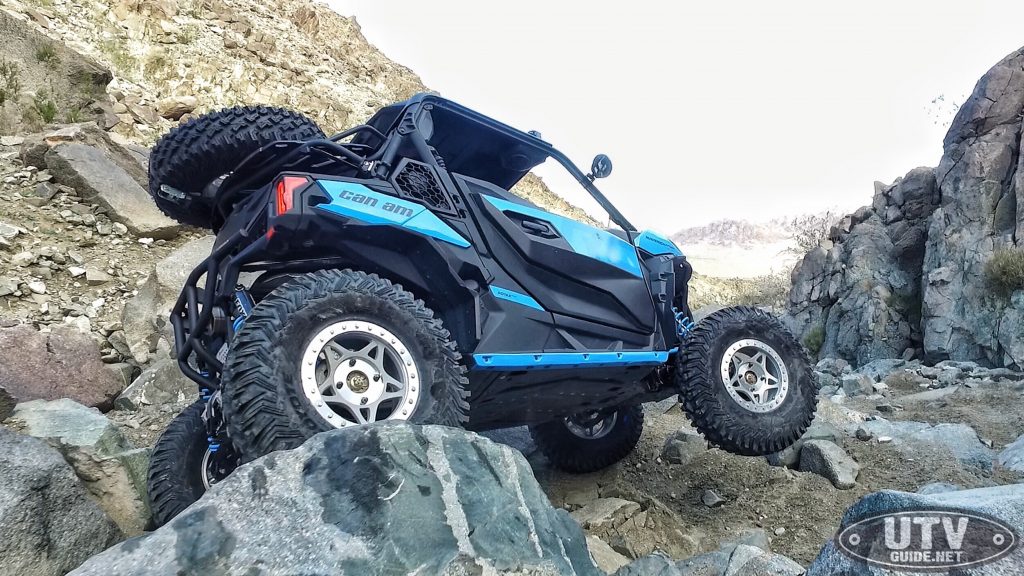 For this trip, we were running a set of new 33x10R15 ITP Coyote tire mounted on Walker Evans Racing beadlock wheels. 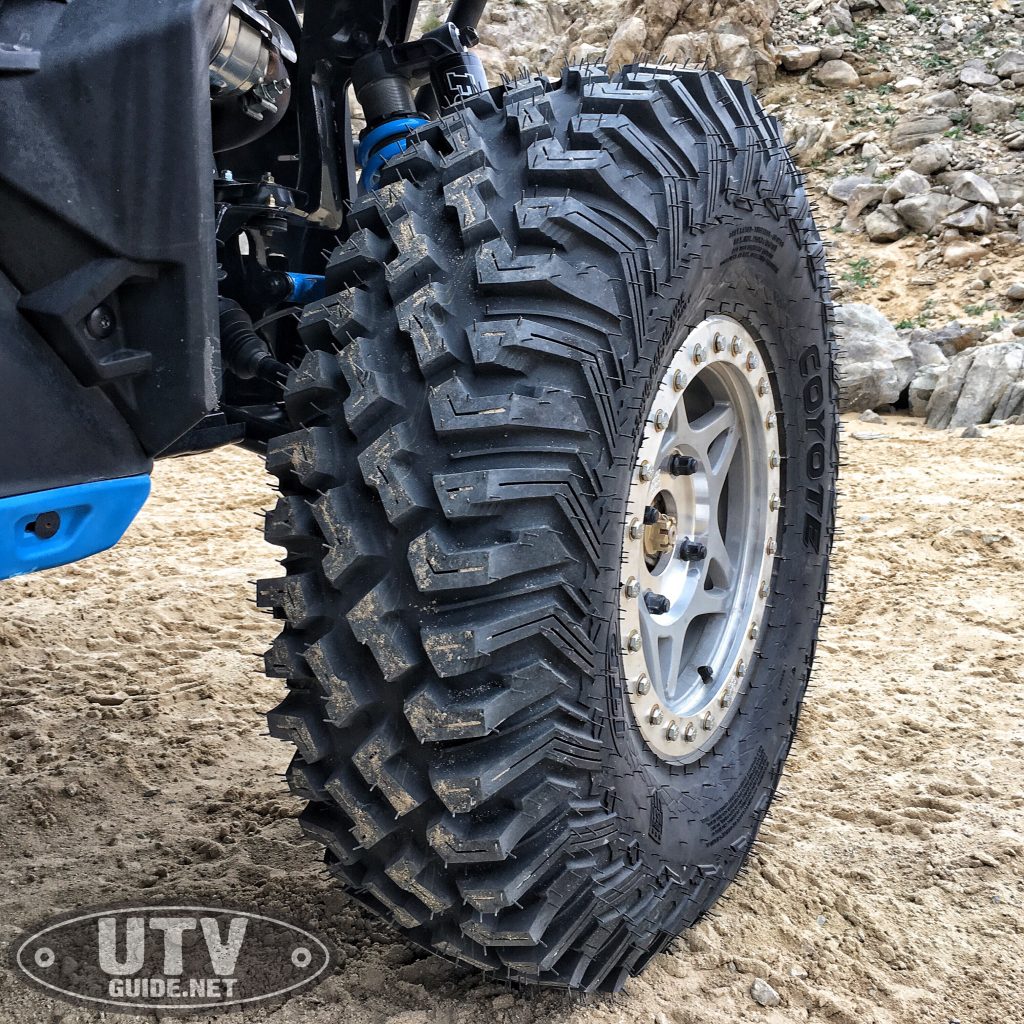 More King of the Hammers Resources

POLARIS FACTORY RACING SWEEP PODIUM AT KING OF THE HAMMERS 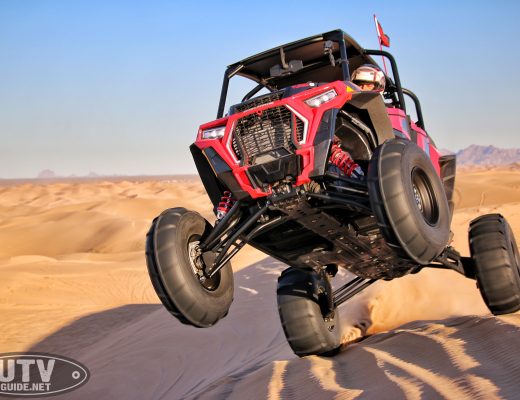