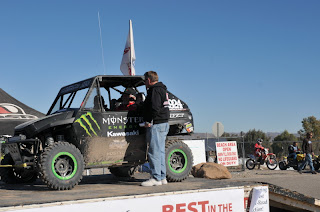 The Parker 250 marks the start of the 2011 Off Road season and sets the tone for UTV Off-Road racing in 2011.  The season opener for Best in the Desert did just that for the Lasher Motorsports team.  We drew a respectable 5th starting position out of the 13 teams that entered the draw.  By race day, there would be 18 teams to take off the line. Parker has always been known for an extremely rough course as sections of it have been used for over 30 years of off-road racing.

We took off from the line and headed into the sun and towards Osborne wash and had as idea of conditions as you could expect for desert racing.  The sun was a little higher in the sky than usual to help keep it out of our eyes and a large rain previously kept a lot of water in the ground to keep the dust down.  Our Monster Energy Kawasaki Teryx was working great early in the race.  Our Teryx seemed to have more power than it ever has as our Muzzy’s built motor was running perfectly!  Our GBC Dirt Commanders tackled the rocky sandy washes with ease giving us the traction we needed to pull through the washes and move ahead.  By the time that we pulled into the first pit on the first lap we had moved up into the 4th position and were right behind third.  The next section of the course was one of our favorites as you can hold the car wide open sliding through the corners for miles on end.  Here we would pass another team that was on the side of the road and take the third position.  Our XMF Long travel suspension with Walker Evans shocks worked so well in the rough desert of Parker that we were able to run hard and fast.  We battled back and forth with the 1919 team trading positions a couple of times.  Coming into the main pit on the first lap we were able to pass the first place car and take the lead.
A quick pit stop that included a driver change so Rick “Wally World” Wallace could drive the second lap and a splash of fuel and we were in and out of the pit in no time. Our co-driver Pete Negrete was feeling good enough that he was going to run booth laps and keep Wally under control too! Our team really pulled it together on this pit stop and got us out in record time.  The second lap would be uneventful for a majority of the lap as our Monster Energy Kawasaki Teryx ran flawless throughout the rough Parker terrain and stayed in the front battling back and forth with the 1919 team for the lead.  A front flat tire with 6 miles to go in the race took us out of contention for the win when we missed a rock and punctured the tire.  Our Walker Evans bead locked wheels allowed us to finish the race without having to stop and change the flat tire.
When the dust settled we were able to secure a second place finish and start the 2011 season in the right direction.
The Next race for the Lasher Motorsports team will be the SNORE Battle at Primm in February.
For more information on Lasher Motorsports you can follow them on facebook at www.facebook.com/lashermotorsports or visit their website at www.lashermotorsports.com.
We would like to thank our sponsors Monster Energy, Kawasaki, GBC Motorsports, Walker Evans, Xtreme Machine & Fabrication, K&N, Muzzy’s, Simpson, OffRoadPress.com, Wally World Designs, Pro Armor, Billet King, and UTV Underground.